AnalysisOne year after Gaza War, little has changed, despite the Israeli army’s insistence

Israel's military insists Guardian of the Walls improved security, but it struggles to read a new reality. 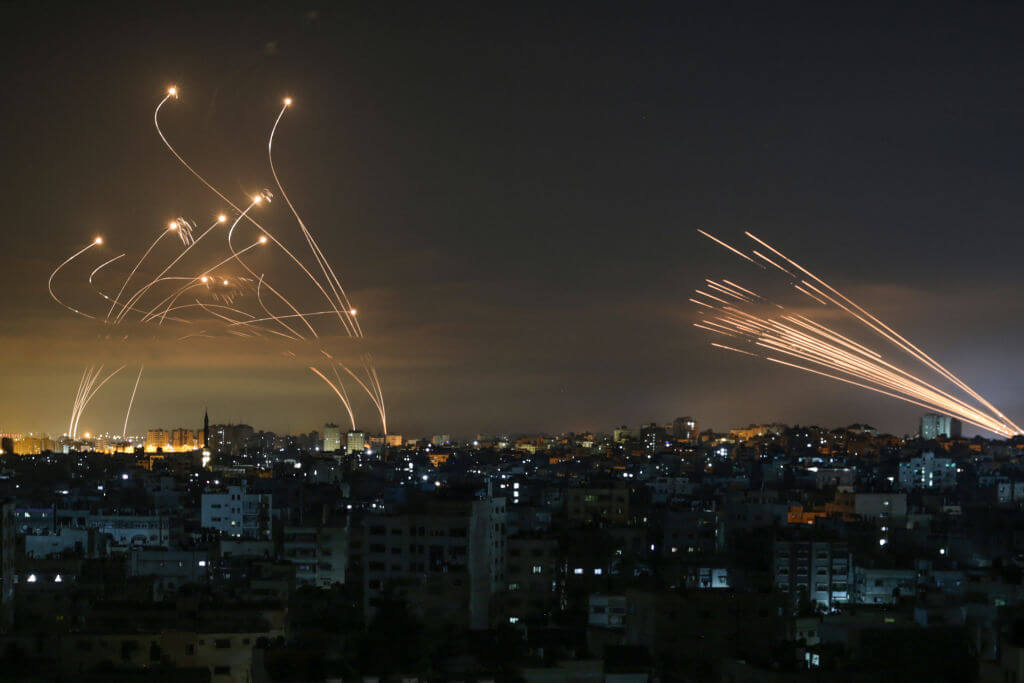 The Israeli Iron Dome missile defense system (L) intercepts rockets (R) fired by the Hamas movement towards southern Israel from Beit Lahia in the northern Gaza Strip as seen in the sky above the Gaza Strip overnight on May 14, 2021. Photo by Getty Images

It’s impossible to evaluate the results of Operation Guardian of the Walls, which began a year ago Tuesday, without assessing the current security situation. The chapter then and the one now are clearly connected.

A relatively long period of quiet near the Gazan border may have followed the last round of fighting in the south, leading to exceptionally large financial investments in the Strip’s crumbling infrastructure.

However, the present terror wave in Israel and the West Bank, actively encouraged by Hamas in Gaza, indicates that the situation hasn’t substantially changed. The operation will be remembered in the end, if at all, as another forlorn episode in the ongoing, perhaps unending, series.

The IDF has struggled to come up with new ideas for how to deal with the current crisis, which apparently will continue for some time. The hope that the violence would fade on its own with the end of Ramadan hasn’t yet come true.

The last round of fighting in Gaza actually began in Jerusalem. An unnecessary clash between the police and young Arabs at Damascus Gate and the Temple Mount provided Hamas leader Yahya Sinwar the opportunity to pour oil on the fire.

When Hamas defied Israeli intelligence assessments and fired six rockets at Jerusalem, the transitional government of Benjamin Netanyahu and Benny Gantz responded harshly. The exchange of fire lasted 12 days, during which thousands of rockets were launched at Israel and the air force bombed thousands of targets in Gaza.

Even after the Egyptians brokered a cease-fire, not much changed beyond the mutual killing and destruction. The achievements each side claimed were poorly correlated to the mutual attacks. Sinwar broke the separation of fronts that the Netanyahu government had pursued.

The rockets fired at Jerusalem gave the signal for serious clashes between Arabs and Jews within the Green Line and increased support for Hamas among Israeli Arabs and West Bank Palestinians.

Sinwar’s second achievement was basically staying alive and Hamas’ remaining on its feet when the fighting ended. A message was contained in the picture of Sinwar returning to his chair in his destroyed headquarters after the cease-fire: It doesn’t matter what Israel does, Hamas is right to continue fighting. The Palestinian public, and the Israeli public to some degree, accepted this narrative.

In practice, Hamas’ military achievements were negligible. Most of the Israeli losses resulted from rocket fire, which partially disrupted life in central Israel for a few days. Israel thwarted all Palestinian attempts to infiltrate Israeli territory via tunnels, to attack with gliders and drones and to send divers for attacks on southern beaches.

Yet Israel’s successes were also limited, relative to the story the army tried to spin.

Yes, many of Hamas’s research and development operation was damaged. Many of its senior officials were injured. Defensive and offensive tunnels were destroyed. The feeling of security among Hamas leaders who descended underground was eroded. But that was about it.

The question of the operation attacking the “metro,” the tunnel system, in which only a few terrorists were killed, remained open and disputed. While Chief of Staff Aviv Kochavi insists it was a major achievement, many senior security officials see the great blowing up of the tunnels as a loss of an intelligence asset, for which the return was small.

A year later, the challenge Hamas presents Israel with remains quite worrying. The Bennett-Lapid government justifiably ended the obscene practice of allowing suitcases filled with dollars, courtesy of Qatar, to be handed over to the Hamas leadership. The new system that was created, which relies on bank transfers, enables at least a modicum of outside supervision over where the money is going.

Meanwhile, the government approved the entry into Israel of 12,000 Gazan laborers and merchants (soon to be 20,000), something that occurred alongside the accelerated transfer of money into Gaza to rebuild the enclave’s faltering infrastructure.

However, Israel failed to achieve more than that. First, Hamas is satisfied with the limited arrangements it has, thereby avoiding any need to return the Israeli hostages they continue to hold. Secondly, the heads of the organization continue to incite terror attacks in the West Bank and in Israel itself, as has been seen since the current wave of violence began seven weeks ago.

Israel was forced to respond to that by blocking workers from entering Israel from Gaza. In other words, Israel’s separation-of-fronts policy has to a large extent failed: It’s proven to be impossible to deal with Gaza separately in the hope that Hamas won’t interfere in the West Bank. To the contrary, Hamas has a two-fold interest in interference: both to keep the flame of resistance alive in Israel, and to embarrass the Palestinian Authority in Ramallah and undermine its ability to control the West Bank.

This hasn’t created an intifada, but a single lethal attack every few days has been enough to upset the sense of personal security on the Israeli home front – and for Hamas, that constitutes a major success. Hence, Israel’s frustration at failing to prevent Hamas from engaging in remote incitement through the speeches of senior officials and through social networks, which has led to calls for magic solutions like assassinating Sinwar.

In media briefings, as well as in its internal consultations, the IDF is keeping to a single line that makes two claims: One is that Hamas is still being deterred after the blow it suffered during Guardian of the Walls, and the other is that the link between the organization and the current wave of terror is only indirect. In fact, it appears that the need to defend the achievements of the last war has muddied the IDF’s analysis of the current situation. The political echelon has also noticed that.

It is true that in most cases, Hamas has simply hitched a ride on the attacks that have taken place, adopting the attackers’ families after the event. But Israel can’t ignore the huge investment Hamas is making in incitement, which peaked last week when Sinwar made his “axes speech” just days before two terrorists used just such weapons in the Elad attack. Many of the terrorists have been encouraged by fake news on the social media about Israeli plans to seize control of the Temple Mount, a line that Hamas has been pushing with all its might.

The Bennett government’s political situation is bad. The coalition is hanging on with difficulty, and the public’s anxiety is growing with the wave of attacks, but severe measures to counter it in the Palestinian arena only increase the risk that the United Arab List will leave the government and cause it to collapse. And Prime Minister Naftali Bennett’s frustrations don’t end there: The minute the attacks began, the army said the steps it was taking – sending more troops to the Green Line, mass arrests in the northern West Bank and economic sanctions against Gaza – would be enough to stop the wave. It didn’t.

Later this month new, politically sensitive dates are coming up – Nakba Day and Jerusalem Day (and with the latter, the Israeli right’s Flag March in the Old City). In the background lies the chief of staff’s understandable desire to avoid getting entangled in an unnecessary war, but also the fear that a teetering government will find it hard to wage a prolonged fight. As long as the crisis goes on, the gap will widen between how Bennett sees things and how the defense minister and army brass do. If the attacks don’t let up, the debates are likely to grow sharper and spill out into the open.

One year after Gaza War, little has changed, despite the Israeli army’s insistence