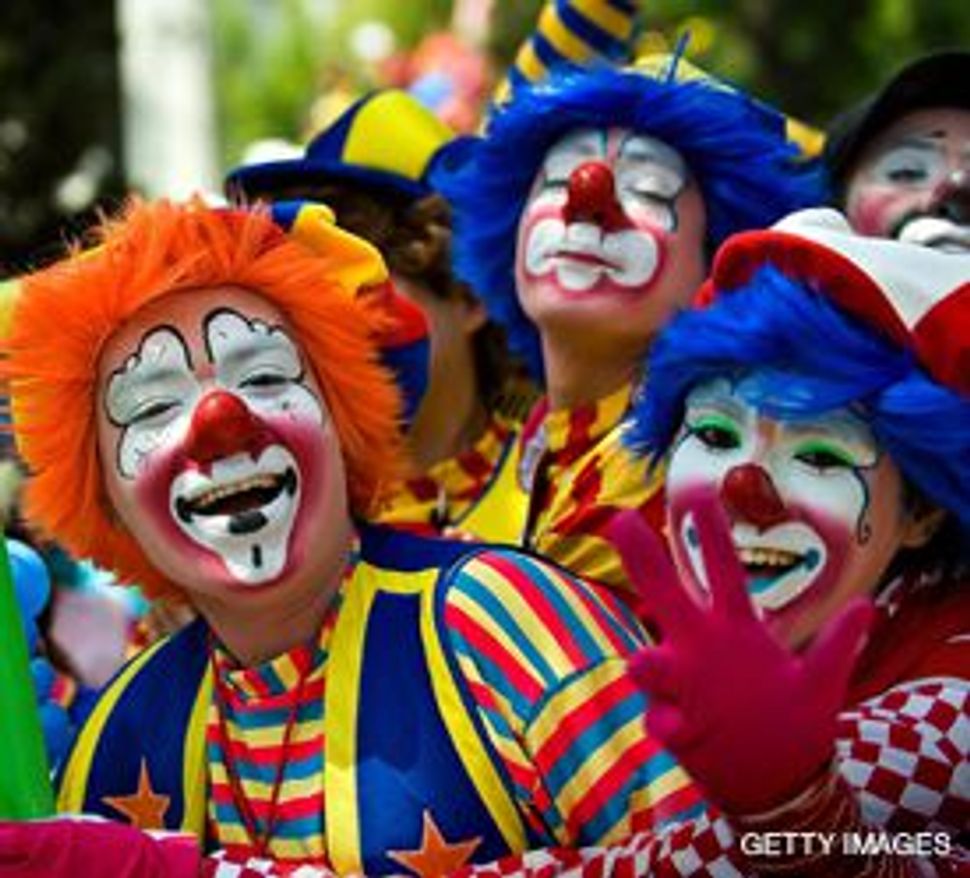 Israeli doctors are having a laugh at the taxpayers’ expense. Literally.

In 2006, Haifa University’s Department of Theatre began a special bachelors’ program for a group of medical clowns who wanted to build on their knowledge. It has now decided to launch a degree program that will train and accredit medical clowns.

The new program is intended for newcomers to the profession. It will focus on fields of knowledge related to therapy, such as nursing, developmental psychology and the history of medicine, as well as theatrical skills that are necessary for clowning, such as comedy acting, improvisation, street theater and juggling.

It includes practical studies in clowning, medical clowning, acting skills, the history of theater and the history of clowning. Graduates of this program will also possess tools for providing therapy and will know what the medical effects of their work will be.

One in two secular Israelis says that they would not like an ultra-Orthodox neighbor, according to a new poll.

Commissioned by the Ynet news website and Gesher, a movement which promotes secular-religious understanding, the poll also found that 73% of Haredi participants said they do not want a neighbor who is not an Orthodox Jew. You can read the results in this Ynet article.

The poll was taken as secular-Haredi tensions are high following several weekends of rioting over car parking in Jerusalem.

It also comes on the back of riots over the arrest and subsequent bail of a Haredi woman suspected of starving her son as a result of Munchausen by proxy syndrome, in which the person affected makes someone else ill, usually a child, in order to get attention. Haredi leaders who have protested the woman’s arrest claim that she is innocent and that the boy is weak because he suffers from cancer. They have likened the arrest to an antisemetic blood libel, and even called for a boycott of Hadassah hospital where the boy was taken.

The significance of the poll on neighbors lies, of course, in the interpretation. Asher Cohen, the Bar Ilan University professor who headed the poll, claims in the Ynet article about the results that the percentage of seculars against ultra-Orthodox neighbors was, all things considered, not too high. He also says that some people say what they feel is expected of them, and not what they really think.

But Cohen’s logic can also be flipped around.

Surely, if you are getting into the gulf between what people said when responding to pollsters and what they really think, the obvious assumption would be that some would want to come out against Haredi neighbors, but feel it is not politically correct to do so.

And even if the figure of seculars against Haredi neighbors is lower than Cohen expected, it is still a majority, and the percentage of Haredim against non-Orthodox neighbors is unarguably high.

The Dead Sea is on the shortlist to be declared one of the seven wonders of the natural world by the New7Wonders Foundation, a Swiss-based non-profit organization.

Israel has already tasted success in modern “seven wonders” contests. Back in 2006 when USA Today in conjunction with Good Morning America revealed a list, chosen by judges, it featured the Old City of Jerusalem.

As for the natural wonders competition, there are two years before the end of voting — open to everyone in the world via this website. Israel’s Tourism Minister Stas Misezhnikov has announced that during this time the government will work to raise the international profile of the Dead Sea through PR and marketing initiatives.