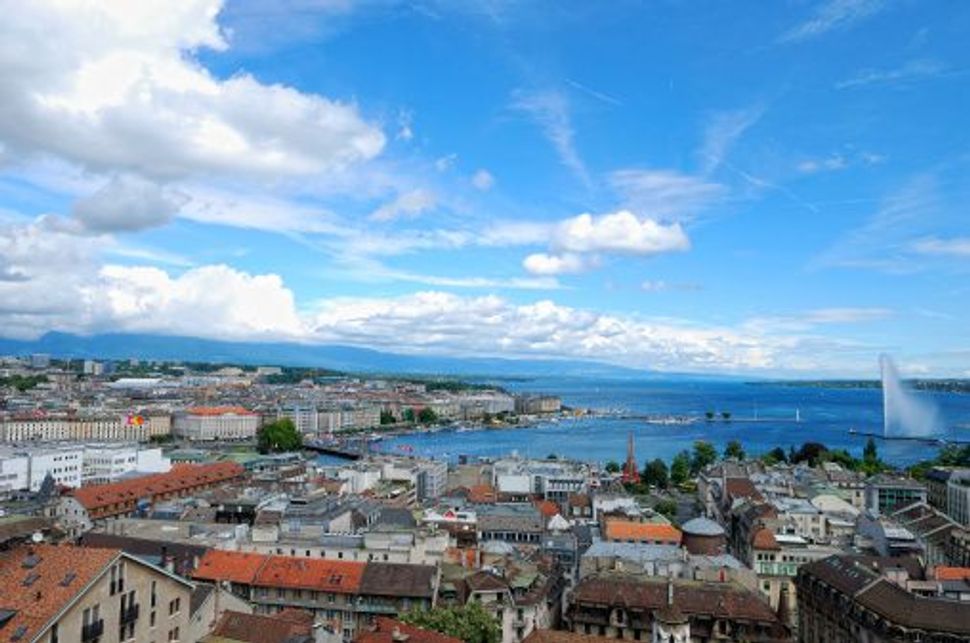 Hebrew may not be a universal language, but well-traveled Israelis make it a handy travel tool. I learned that as a rising college senior, when a gal pal and I backpacked around Europe, bumping into Israelis everywhere. My French was as non-existent then as it is now, but my Hebrew was quite good, and so during our week in Paris, my contribution was asking Israelis for directions.

I didn’t have the same experience during my family’s recent trip to Geneva. My husband was working around the clock, so my one-year-old daughter, Lila, and I had whole days to ourselves and absolutely nowhere to be. After we missed Shabbat services that first weekend (I hadn’t researched our options in time), I Googled local Jewish life — Shabbat transcends geography, after all — and learned that Geneva has both a Chabad as well as several other synagogue options. And one of those synagogues, the progressive GIL, offers Israeli dancing lessons on Wednesdays.

Lila loves music, and though she had never experienced Israeli dancing before, how could she not enjoy it? Music moves her. Whenever Mozart or mariachi music plays, she claps and wiggles along, her radiant smile beaming. So on Wednesday afternoon, my pint-sized travel companion and I set out for GIL. We navigated foreign tram lines, crossing much of the city until we arrived in “The Ghetto,” the nice residential area where many of the city’s Jews live. For context, Geneva has a population of nearly 200,000; GIL’s outreach director told me that around 6,000 are Jewish, with approximately two-thirds identifying as traditional (Orthodox or ultra-Orthodox) and one-third as progressive (Reform). A local Jew told me that there isn’t much anti-Semitism, but explained that Genevan Jews know they can’t “brag” about their Judaism. She also noted GIL’s reasonably serious security, which she described as “a must.”

Lila and I arrived at GIL late and quickly joined six other local women who were there for the dance class, five of whom were mothers with older children, the sixth being younger and single. In GIL’s open and airy common space, the Israeli-born teacher demonstrated complicated steps to a number of dances, including the fast-paced “Na’aleh Yerushalaim” (“Let’s Go Up to Jerusalem”) and “Lo Ahavti Dai” (“I Haven’t Loved Enough”), which I actually remembered learning in seventh grade. The teacher taught the class in French but explained the steps to me in Hebrew and some English. Still, I studied her feet closely and learned to decipher various French words (like if gauche was left, droite meant right). It was a lot to follow in three languages, not to mention remember, but once the music started, everything clicked. Amazingly, my body knew all of the steps. All the while, Lila contentedly observed the scene from her ERGObaby carrier, watching me bounce and sway through each dance move. I could tell she relished the sashays and the jumps, and several women remarked on her lit-up face.

That afternoon was special, because it symbolized a microcosm of home for me. In Geneva, it was impossible to forget that I was in a foreign country. There were unfamiliar sights and sounds, Swiss Francs, and French spoken everywhere. But meeting members of the local Jewish community, hearing Hebrew and dancing to Zionist songs I hadn’t heard since sleep-away camp made me feel like less of an outsider. Here were people who shared my interests and cultural heritage.

Geneva feels very international in certain ways — indeed, it’s home to the United Nations and World Trade Organization. But it doesn’t feel particularly Jewish. It’s nothing like New York, so for a visiting Jew, it’s easy to wonder if you’re the only one there. In Geneva, the closest kosher supermarket is in France, the main grocery chain markets challah as “butter bread,” and as a dark haired Jew you’re likely to be mistaken for a Spaniard. But if this trip proved one thing, it’s that for me, home can be wherever the Hebrew is.