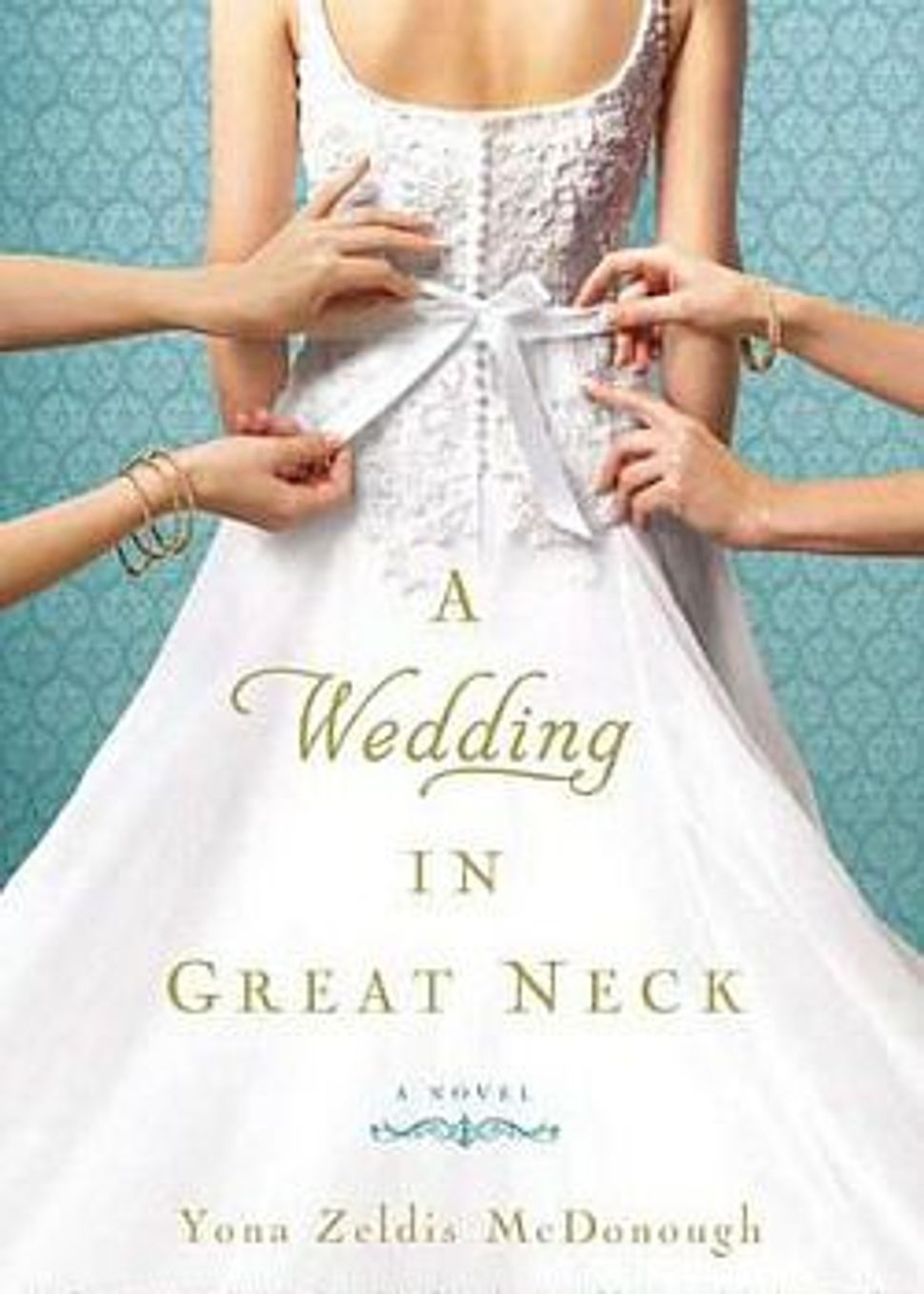 “A Wedding in Great Neck:” Family Mishegas Arrives Just in Time for the Nuptials

Yona Zeldis McDonough’s new novel “A Wedding in Great Neck” takes place over the course of a single day, as a Jewish family gathers for the lavish wedding (to a handsome Israeli) of Angleica, the aptly-named youngest daughter who at least appears to be the apple of the family’s eye.

In the fabled locale where Gatsby’s (and P. Diddy’s) parties epitomize American aspiration, the clan begins to fray at the edges while the band and photographer set up and the sky threatens rain. Among McDonough’s memorable characters are teenage Justine, whose surface anti-Israel fervor may mask more serious problems; divorced father of the bride Lincoln, desperate to make good after years of alcoholism, and matriarch Lenore, a bra-fitting expert who decides to take this one day to “fix” everything up for the troubled generations below her: kids, grandkids, great grandkids and more.

In an email exchange with the Sisterhood, McDonough discussed the inspiration behind Lenore, her novel’s structure, and gender in the literary world.

I have read wedding novels and novels that take place in a single day, but never both at once! What gave you the idea to combine them?

I had recently read — and was very impressed by — two other books that took place in a single day. One was the masterpiece “Saturday,” by Ian McEwan, which I thought was truly epic in its scope and depth. The other was Helen Schulman’s well-done and deeply moving “A Day At the Beach.” I was intrigued by the formal problems posed by creating a novel whose story unfolded in a day and I thought a wedding would offer a strong enough armature on which to base a plot structure of that kind.

Great Neck and Long Island have literary significance as a sort of WASPy paradise that outsiders want to enter. And the other wedding novels I’ve read recently (Maggie Shipstead’s “Seating Arrangements” and Richard Russo’s “That Old Cape Magic”) were also super-WASPy. Did you have a deliberate thought of putting a Jewish spin on these tropes?

Since I am Jewish, it felt quite natural and comfortable to create a fictional family like the Silversteins. I feel like I have known them, or people like them, my whole life. I understand their aspirations, their longings, and their disappointments. They are strangely dear to me, faults and all.

Your story has a character whose beliefs about the Israeli-Palestinian conflict clash with her family. Obviously this rings true for many of us. Do you feel like this issue, such a part of today’s Jewish-American lives, is becoming a major theme in Jewish fiction? Should it be dealt with more?

I do think there is growing interest in this topic on the part of the American Jewish community. As to whether it should be dealt with more, I can’t say — I have not adopted any sort of political platform and I don’t want my beliefs to be confused with Justine’s rather simplistic ones. I can say that I have deep ties to Israel. My American-born parents were Zionists who met in Habonim; they went to Israel in 1949 and lived there for nine years. My brother and I were both born there and though I do not remember the country from that time (I was a year old when we returned to the U.S., ostensibly for a year or two), Israel has always had a kind of mythic hold on my imagination. I made my own pilgrimage there when I was 18, and lived on a kibbutz in the Negev that was mere kilometers from where my parents had been.

Lenore, the matriarch of your clan, is a bra-fitting expert who is constantly sizing women up to see if they’re wearing properly supportive undergarments. What was your source for her profession?

I had made a visit to the Town Shoppe, a long-established lingerie shop on the Upper West Side and while I was there I had a chance to speak to the grandson of the owner. He told me about his grandmother who had founded the shop and built her life around it. She would not retire, even into her 80s, and was literally carried out of the store (heart attack) before she would give it up. I was fascinated by this and knew I wanted her as a character. Of course I gave her a backstory and other idiosyncrasies that were entirely my own invention.

As Fiction Editor for Lilith, a “frankly feminist” magazine, what’s your take on all of the high-profile spats about Jonathan Franzen, women’s fiction vs. literary fiction and the VIDA numbers that show women have fewer bylines in “thought leader” magazines? Should women writers seek out welcoming spaces, try to charge the gates at male-dominated spots, or both?

Without a doubt, both! It saddens me that writing by women is still marginalized — women read the Jonathans (Franzen, Safran Foer, Lethem) but do guys read books by Alice (Munro, McDermott, Hoffman) in the same numbers? Somehow I don’t think so. And when men write about domestic issues and dramas — think Tom Perotta in “Little Children” — they are lauded to the skies. But women have been mining that territory for years, and yet told they are narrow in their scope and concerns.

What writing projects are you working on next?

I’m working on a quasi-sequel to “Wedding” — it’s a novel called “Two of a Kind” about two characters who meet at Angelica’s wedding though neither of them actually make an appearance in the first book. And then I am working on another novel that takes place in 1947 and is about an unlikely friendship between a Jewish and Christian woman.