Why We Struggle to Honor Autistic Newtown Victims 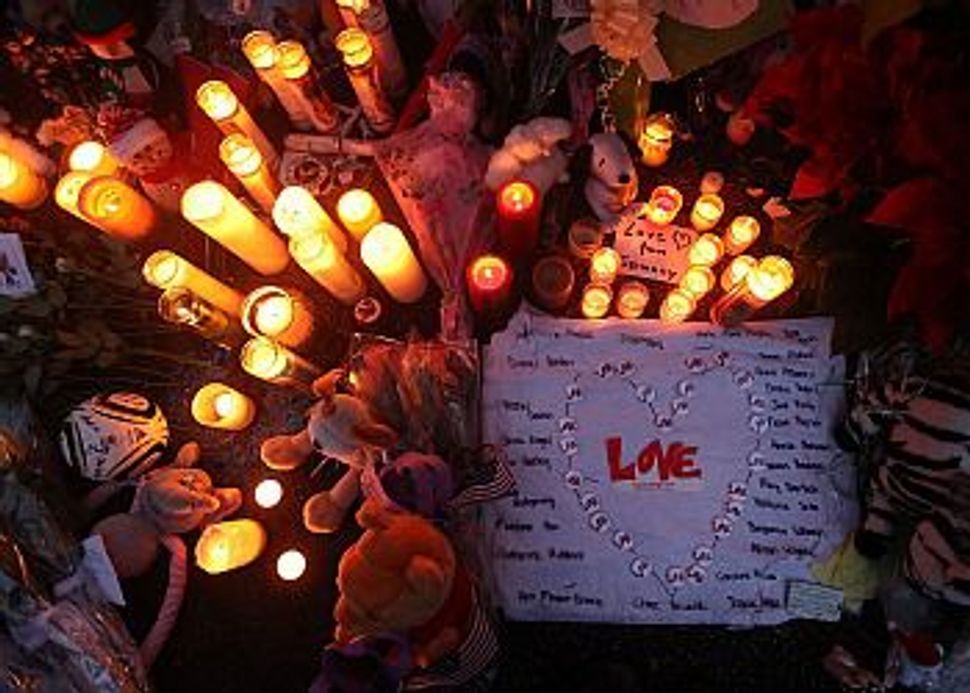 Candles are lit among mementos at a memorial for victims of the mass shooting at Sandy Hook Elementary School in Newtown, Connecticut. Image by Getty Images

Zichronom livracha says the liturgy. And, certainly, the memories of the 26 children and adults who were tragically gunned down in Newtown last week are a blessing, not only to their immediate families but also to all of us across the country who have been struggling to comprehend this incalculable loss.

I grieved for these families as we learned more about their loved ones. But gradually, something made me uneasy. On the one hand, there was so much that was poignant about the details reporters like Anderson Cooper were sharing with us. Time after time, we were introduced to children who “lit up” rooms, displayed angelic smiles, and demonstrated great love and caring for others. But I noticed that there were children we weren’t hearing about. And I couldn’t help wondering about their lives, too. Call it a mother’s intuition — the intuition of a mother of children with special needs. But I was not surprised to hear, eventually, that two of the murdered children, Dylan Hockley, 6, and Josephine Gay, 7, both had autism (to different degrees).

Dylan was reportedly found cradled in the arms of his special-education teacher, Anne Marie Murphy, who was trying to shield him with her body. Murphy, a 52-year-old mother of four, was also killed. At Murphy’s funeral, Cardinal Timothy Dolan eulogized, “Like Jesus, Annie laid down her life for her friends.” Dylan’s parents had moved their family from England specifically to Newtown because the school district was known to be extremely supportive of children with special needs. His parents have said that they draw some comfort from knowing that he died in Anne Marie’s arms, because Dylan had pointed to her photo excitedly each morning before school, knowing he’d see her soon.

Two days later, we heard about another child with autism who was killed. Josephine Gay, who several days earlier was just alluded to as the girl who had “recently celebrated her 7th birthday,” was painted in a fuller picture. Her parents released a statement:

Although we are protecting our family’s privacy during this time of healing, we believe it is important to share some of Joey’s story. It will help us if others know what a special person she was and how she inspired everyone she met .Joey was autistic and severely apraxic. She could not speak, yet she touched the lives of so many around her: teachers, therapists, friends, neighbors, all loved and cherished her.

And this is one difference — for better or worse — between families with children with special needs (particularly autism), and those with typically developing children. When asked to tell people what our sons and daughters are like, we, too, can share details reflecting a typical childhood: a love for baseball or horses, or a deep bond with a sibling. But we do not immediately disclose the not-so-pretty things. That our child is non-verbal. That our child’s problems are “severe.” That on too many days our kids do not behave angelically. They do not always light up a room.

I can’t know the precise histories of Dylan or Josephine. Some children with autism are easygoing. But many can be disruptive. Some — notwithstanding the truth that autism does not cause violence — can frighten others with their behavior. Their interests can be unconventional for children their age; instead of playing sports or producing vivid artwork, they may exhibit odder, even grating proclivities, like making repetitive sounds or motions, or reciting different subway routes all day long. In other words, maybe they were kids who were, at times, difficult to describe to others.

I also wonder about the last moments of the children with autism. We have heard of the heroic efforts of Sandy Hook teachers to calm their students, read to them, and stroke their faces if they started to whimper. But many children with autism would be inconsolable in a situation as terrifying as this one; these kids do not handle change or surprises well, particularly ones as horrifying as a lockdown. Do you recall the Rosh Hashanah liturgy that says “who shall stay calm in the storm, and who shall be troubled by a passing breeze”? Many kids with autism or other special needs fall into the latter category, day in and day out. I have wondered — silently, because I dare not ask aloud — if these children were crying out? Could they have attracted more “attention” in the wrong way? If, god forbid, something like this were to happen at a school exclusively for children with autism, would the outcome have been even worse?

My purpose is not to suggest that any child’s suffering — or any parent’s — is worse than another’s. But the details that Dylan’s and Josephine’s families have shared add a fresh ache and another layer of grief. They inspire me to say yet again, Zichronom l’vracha.

Joanna Dreifus is a mother of two and the founder of Special Kids NYC.

Why We Struggle to Honor Autistic Newtown Victims