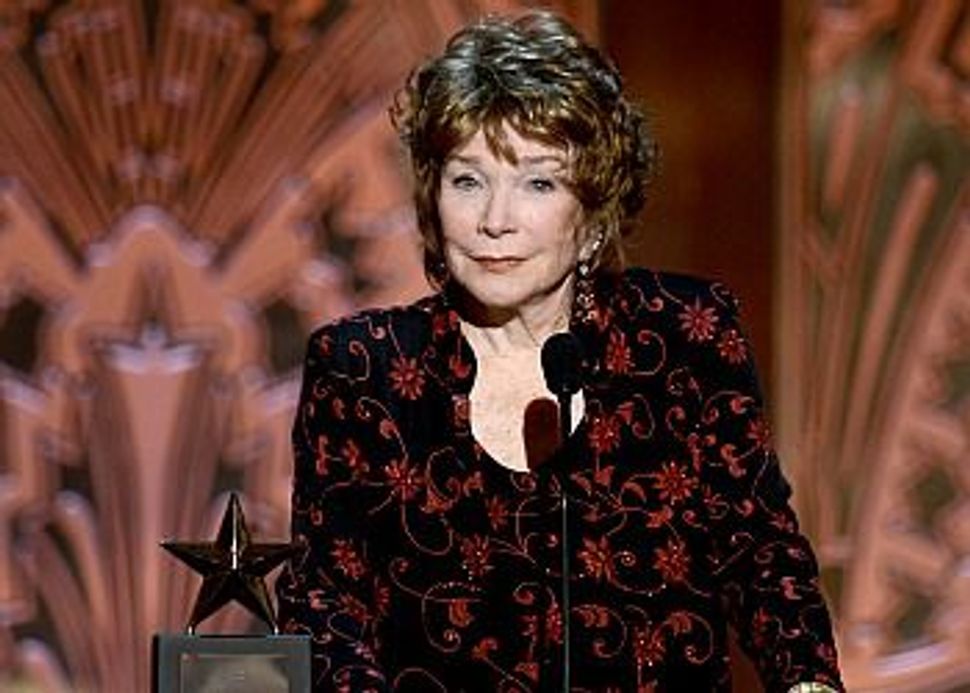 Last night, British period drama “Downtown Abbey” had its stateside premiere of the third season — to the accompaniment of thousands of excited tweets. And at least for this “Masterpiece Classic” fangirl, one of the highlights of the first episode was the arrival of Shirley MacLaine’s Martha Levinson, the gilded American counterpart and foil to Maggie Smith’s zinger-slinging Dowager Countess. The genteel enmity between them was prefigured when Violet, the Dowager Countess, says before the American Levinson’s arrival, “When I’m with her, I’m reminded of the virtues of the English.” It was an absolute joy watching the two legendary actresses spar high-handedly over the relative merits of British tradition v. American inventiveness.

But even though Levinson’s bold outsider ways, her wry expressiveness and even her refusal to eat crab (as communicated by her maid) may have indicated otherwise in the premiere, it seems she is not a Jewish character. Not strictly, anyway. Many of us were convinced that — thanks to her husband’s name, “Isidore Levinson,” and his fortune as a Cincinnatti dry goods manufacturer — there was strong evidence for Martha’s and her offsprings’s Jewishness.

And we weren’t strictly wrong. It just seems that according to Downton’s creators, Isidore, a Jew, left the tribe behind him when he married. Renee Ghert-Zand discovered the truth, embedded in an official behind-the-series book:

The tome contains a chapter devoted to “Mrs. Isidore Levinson,” which states that although, “Martha’s husband was Jewish, she herself is not, and their children were raised Episcopalians.”

Well, you could have fooled me, since I thought MacLaine played Martha as Jewish. (A diehard fan, I’ve seen the third season, which has already aired outside the U.S.) With Martha Levinson’s brash demeanor and over-the-top wardrobe, I thought producers were signaling not merely that the character is nouveau riche, but that she’s nouveau riche and Jewish.

Ultimately, whether Levinson is actually Jewish or whether she just married a Jew and raised her children as Christian isn’t particularly relevant to her symbolism in the plot. The fact, for instance, that Martha would have had no issue marrying a Jewish man while the thought of any sort of “foreigners” renders the Downton clan apoplectic illustrates the difference starkly.

What Levinson represents, and what both Jewish and American characters have long represented in the tradition of British fiction and television, is the uneasy but fascinating relationship between the staid British gentry and the dynamic, untethered ways of “the outsider.” In Anthony Trollope’s famous nineteenth century novel “The Way We Live Now,” the diffidence of the characters hailing from the English upper crust is pointedly contrasted with, among other examples, both a brilliantly crooked Jewish financier and a completely over-the-top, sexually crazed American adventuress — contrasted with a strange mix of admiration and disdain.

“Downton Abbey” creator Julian Fellowes continues rather in this vein. The tug between stuffy but longstanding aristocratic rules of behavior and the intrusion of the “new order” is a theme that beats viewers over the brow when we watch the show. It’s obvious to me where Fellowes, an avowed Tory, stands: He portrays the social agitators, from the radical Irish Chauffer Branson, to the do-gooder cousin Isobel Crawley, as socially-inept prigs — or even worse, the case of class-resentful servant Thomas, as manipulating and evil — and has a soft spot for the snootiest aristocrats and the most loyal servants.

Matthew Crawley, who stands for a middle way, eventually accepts fate and becomes the heir to Downton. But even though Fellowes’ heart may be with the old ways, I have to watch “Downton” with the exact opposite sentiment as the Countess predicting her encounter with Levinson: I’m reminded of the virtues of energetic outsiders, whether Americans, Jews, both, or other.