Most Sexist Oscars Ever? 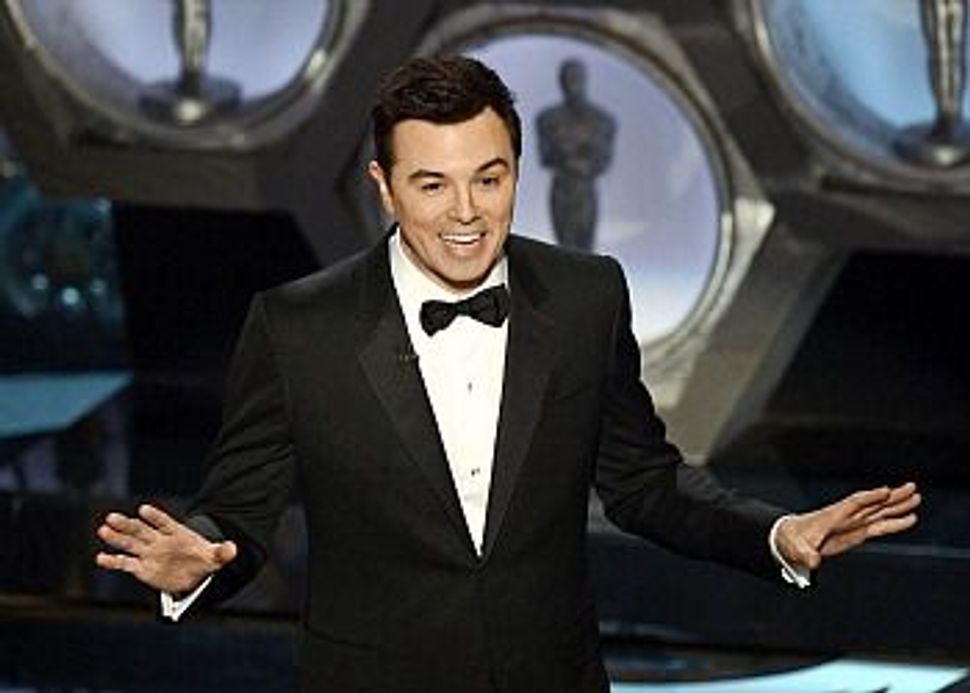 What was that all about?? The 85th Academy Awards were wrapped up with the red bow of Monday-morning Internet commentary as being a memorably sexist, racist, homophobic, anti-semitic extravaganza, thanks to the material provided by host Seth MacFarlane.

Listicles ticking off the night’s offensiveness were circulated before the clock struck midnight and the crowd moved on to the after parties. And with good reason: MacFarlane’s gags included a song about actresses showing their “boobs,” a glib joke about domestic abuse, a retro shpiel about a cabal of Jews controlling Hollywood, “humor” about not being able to tell black actors apart, and a mean-spirited crack about a Latina actress being unintelligible yet hot. Add to that: discomfort with gay men, a line about a child actress of color’s future sex life, a fat joke, a “women nag” joke and a hairy women joke and so on, and so on.

“This wasn’t an awards ceremony so much as a black-tie celebration of the straight white male gaze,” wrote Margaret Lyons at New York Magazine. Dana Stevens at Slate thought the problem arose from “defensive anxiety about the ascendant power of women” while Willa Paskin at Salon noted that by choosing MacFarlane “the Academy, an institution allegedly full of women, homosexuals and bleeding heart liberals, elected a bro-tastic, tux-wearing dude who probably believes ogling women is the highest form of flattery to be its emissary.”

And at the Atlantic, Spencer Kornhaber opined that the problem was that none of the jokes were poking fun at old stereotypes, merely imitating them with nary a wisp of commentary: “The more we pass off old stereotypes, rooted in hate, as normal—as MacFarlane did again and again last night—the longer those stereotypes, and their ability to harm people, will be in place.”

I agree with all these commentators. MacFarlane’s fans have labeled anyone who dared criticize the comedian “the PC humor police,” but he was the one doing the policing on Sunday night — using his stage time to smilingly corral the crowd back into the race and gender hierarchy of Old Hollywood, glamorous and discriminatory as it once was and too often remains.

The Archie Bunker brand of yuks that MacFarlane’s animated menagerie typically blurts out on his cartoon shows was amplified (and even more unfunny) when delivered by its creator, a white guy in a tux, in a room where white guys in tuxes still call the shots. Many of the stupid jokes sounded on my ears like a whiny demand that a wave of female attention-getters, from the Kardashians and Adele to Quvenzhané Wallis and Jessica Chastain, get taken down a peg and stop hogging the attention. (As it was, divas like Dame Shirley Bassey, Jennifer Hudson, Adele and of course Barbra Streisand, kept the dismally dull evening on track.)

The Oscars used to be my mostanticipated night of television. I adored watching with my girlfriends, celebrating the kookiness, competition and camaraderie of a talented, powerful and yes, egotistical group of people — a group whose most interesting members were often female. Yet over the years the big night has proceeded down a long red carpet of dullness. In fact, the more halting steps women and people of color seem to make in the industry, the more buttoned-up the awards become. And MacFarlane’s “risque” humor didn’t change that trajectory; it reinforced it.

It’s too bad. I yearn for an Oscars with outlandish dresses and outrageous speeches, without cruel fashion critics and uptight stylists forcing attendees into boring gowns and thousands of wagging tongues on Twitter scaring everyone into polite conformity. I crave outsize egos and political rants. Mostly I wantdeserving talent with body sizes, ages, personalities and voices that don’t fit a prefabricated norm to be celebrated, not mocked and shamed by the host of the show.

And oh, yeah, I’d really like the show to be funny. Is that so much to ask, even of a man?

Most Sexist Oscars Ever?