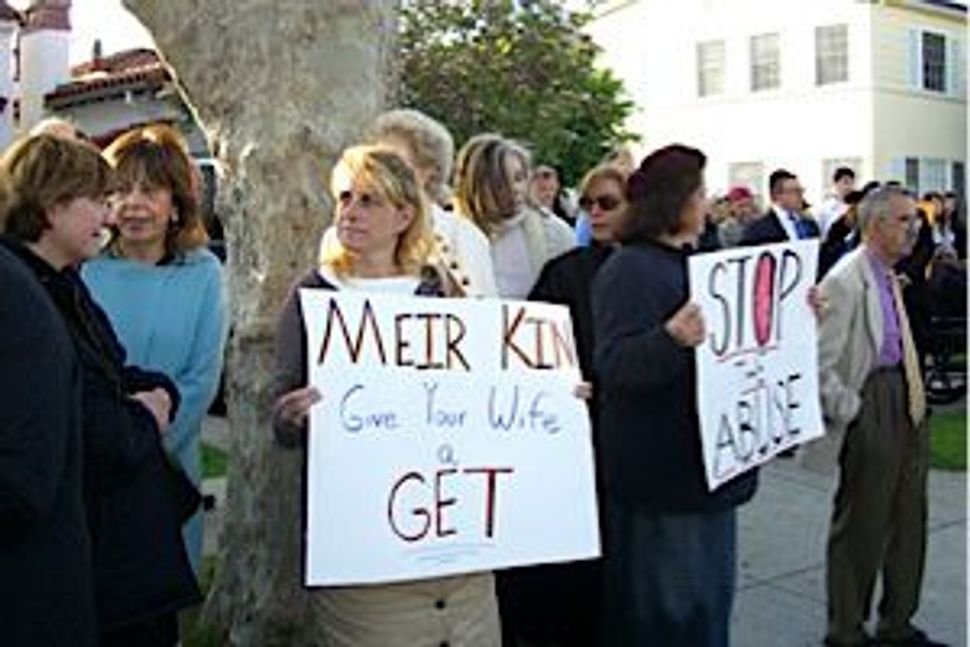 Protest: Members of L.A.?s Orthodox community at a rally in 2009 for a woman they claim was not granted a Jewish divorce. Image by REBECCA SPENCE

I cannot fathom the idea of working on a problem for 40 years. And yet, there is a whole group of Jewish women — and a handful of men — who have been doing just that. These are the agunah activists, some of whom have been fighting to find solutions for agunot — women trapped in unwanted marriages to recalcitrant husbands due to women’s lack of exit power from Jewish marriage – since the advent of the feminist movement in the 1970s. These activists, who demonstrate incredible perseverance and determination often with very little outcome, would be forgiven for giving up. But it’s possible that this week they may have reached a certain light at the end of the tunnel.

“I did not want to come today,” longtime agunah activist Rivka Haut told a packed crowd this week at an historic Agunah Summit organized by the Jewish Orthodox Feminist Alliance and the Tikvah Center for Law and Jewish Civilization at NYU. The Agunah Summit, coordinated by JOFA founder Blu Greenberg, aimed to promote the use of systemic solutions within halakha in order to release agunot. Over 200 Jewish leaders filled the hall, eager to resolve this harrowing problem and the needless suffering of women, once and for all. “I wasn’t going to come, because I thought, more talking and not enough resolution,” Haut said. “But I’m leaving here optimistic. I think there is a chance now for real change.”

The change that Haut was referring to was the repeated calls for establishing a special rabbinical court to release agunot, one that would use halakhic tools such as “hafkaat kiddishin,” a form of annulment. Many speakers during the day supported the use of these halakhic tools, and several key rabbis — including Rabbi Asher Lopatin, Rabbi David Bigman and Rabbi Shlomo Riskin — advocated for establishing such a court immediately. Many rabbis in the audience said that they would be supportive of such a court, and some said they would be willing to study to become rabbinical court judges in order to be able to sit on the court.

“Agunot are modern day slaves,” Professor Alan Dershowitz told the crowd. “When 19th century churches tried to justify slavery based on biblical passages, the result was that people lost faith in their religious leaders. The same thing can be seen happening today with the situation of agunot.” Several speakers echoed this sentiment. Dr. Rachel Levmore said that she has lost faith in the rabbinical courts to solve the problem. Even Israeli Justice Minister Tzipi Livni, who opened the day, said that she does not see the rabbinical courts advancing solutions to the suffering of agunot.

The suffering of women in the rabbinical courts was perhaps best documented by Professor Ruth Halperin-Kaddari of Bar Ilan University. She found that a full third of women going through divorce in Israel are subjected to the threat of being turned into an agunah. Among Orthodox women the figure is 50%. I would argue that this is probably comparable to the American Orthodox community, where people choose to enter the rabbinical court system, as opposed to the non-Orthodox Israeli community, where divorce via rabbinical court is mandatory. Halperin-Kaddari, who is the leading researcher on the subject and served on the United Nations Committee on the Elimination of Discrimination against Women (CEDAW), pointed out that the use of threats and extortion during the divorce process is a form of abuse — meaning, half of the Orthodox women going through divorce are being abused by their husbands during the process, and the rabbinical courts act like they are powerless to stop it.

Amid this harrowing portrait, the voices of rabbis expressing an immediate willingness to establish systemic solutions to this problem were an especially welcome relief. It really has been a long time in coming, and for many agunot it may be too little too late. Indeed, the Summit follows a long and painful history of good people trying to alleviate the pain of agunot. Rabbi Emanuel Rackman z”l, along with three other rabbis, established a special Beit Din for Agunot in the 1990s. Although the beit din freed hundreds of agunot, very few Orthodox leaders stood behind it and many expressed their objections by refusing to allow the freed women to remarry under their officiating. Nevertheless, despite continual pressure to cease, Rackman did not abandon his efforts, because he felt that justice was on his side — and the women who were freed expressed profound gratitude.

Still, since Rackman’s death in 2008, little has been done in this realm. One of the things that makes this week’s Agunah Summit so significant is that the calls for establishing a special agunah beit din are now being heard across the Orthodox spectrum, strongly supported by many rabbis from Israel and North America who expressed their commitment to accept halakhic nullifications in order to free agunot. The prospect raised at the Summit of establishing a place where women can achieve their freedom brought some long-awaited light to this dark tunnel.

The best part of the day for me was when Professor Joseph Weiler, director of Tikvah, called out the names of the agunah activists present and asked them to stand. One might say that agunot owe these women and men a debt of thanks. But I would argue, as did Weiler, that the entire Jewish community owes them a debt of gratitude. “They keep our world from falling down under the weight of injustice,” Weiler said. “They do the work of the rabbis and the community in caring for the oppressed and shepherding them to freedom. They carry the burdens of agunot with them every day, and never give up.” I fully concur. The tireless agunah activists are the ones ensuring that we live up to our divine mission of maintaining a compassionate community for all.

So if you bump into an agunah activist on the street, you should probably thank her.