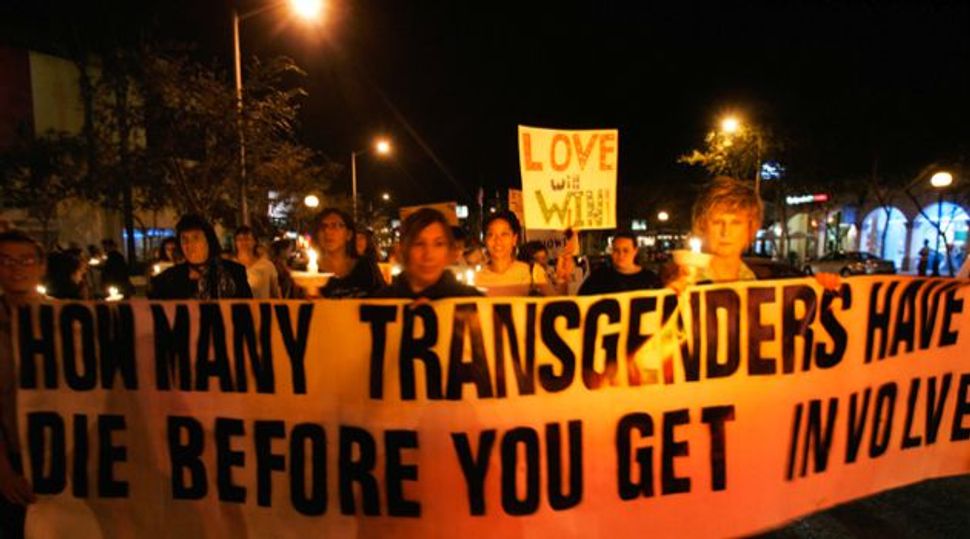 Today is Transgender Day of Remembrance, a day set aside to memorialize trans people who have been killed because of their gender identities. Founded in 1998 by Gwendolyn Ann Smith, a transgender designer and activist in the wake of the murder of Rita Hester in Allston, Mass., the day is now observed in hundreds of cities around the world. Typically, there’s a candlelight vigil, and participants read the names of transgender people who have been killed in the past year. No doubt the name of Islan Nettles, a transgender woman who was murdered in August in New York City, will be read aloud tonight.

This year, Transgender Day of Remembrance falls very close to Hanukkah. It turns out that the two commemorations have more in common than candles. S. Bear Bergman, a Jewish transgender author, draws parallels between the two in a new book, “Blood, Marriage, Wine and Glitter”:

Every year there are more candles to light as the annual count grows. I want to love any increase of brightness, but lighting a candle for every murdered transperson in the past year is not one of those times. I wish the number of flames would dwindle. I am in that moment of the House of Shammai, he who argued that Chanukah candles should start at eight and dwindle down to one. Hillel’s method, the increase of light, was adopted instead, and it seems correct to me even when I separate it from “tradition,” also known as “the way we’ve always done it in my family ever since we started having the holiday at our house instead of Bubbe Rochel’s.” Light should increase in times of joy, in times of sorrow, light should increase. I do not think these are contradictory positions.

In the story of Chanukah, we’re brought over and over again to the understanding that the miracle of this jar of oil is only on the surface the fact that it burned longer than anyone expected that much oil to burn. That’s kind of cool, but we don’t make it a holiday. What happened in the Temple 2200 years ago is that the hearts of Jews – miserable in defeat, locked away from their source of religious observance – were in darkness. They were in despair. And when the light came back on, when they saw the international, wordless, perfect symbol of We Are Here, they rejoiced in it.

This year, Hillel: The Foundation for Jewish Campus Life is taking on the issue of transgender rights as part of its Ask Big Questions programming meant to spark conversation about difficult and universal topics. Ask Big Question’s discussion guide, which explores the question, “When Do You Take a Stand?” is based in part on Bergman’s essay, a larger excerpt of which can be read here.

“At Hillel, we want students to learn about Transgender Day of Remembrance in an effort to create inclusive Jewish student communities that are open and loving of people of all gender identities,” said Sheila Katz, director of Ask Big Questions, in an email to the Forward. “Trans Day of Remembrance is a solemn day to remember those who have lost their lives to hatred, and it is also a day for Jewish students to commit to being more empathetic and caring to people from all walks of life around them. We strive to raise awareness which in turn will inspire action.”