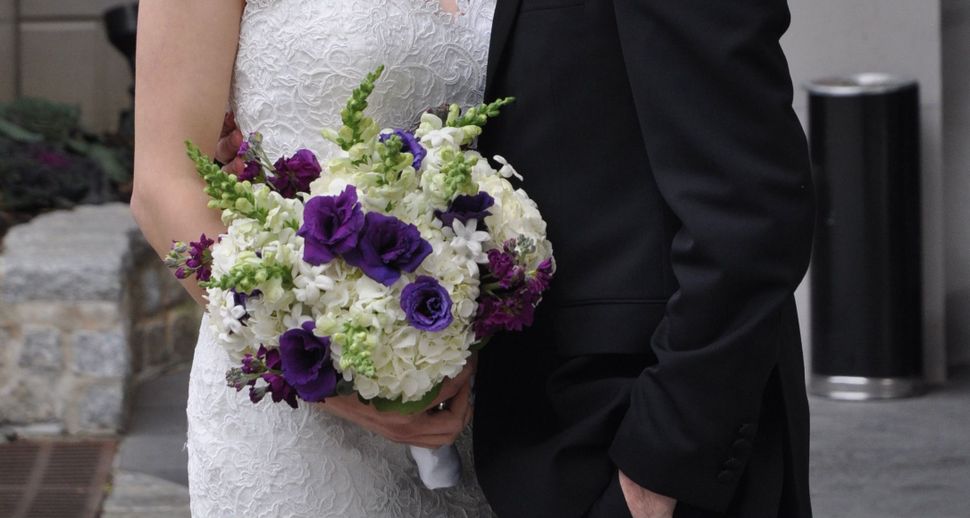 I was supposed to be a low-maintenance bride. I am usually “the easygoing one.” Our florist would disagree. As I stood in front of his 20 foot refrigerator and pointed to every type of flower, telling him which to put in our arrangements, and which should, under no circumstances , even come near our venue, it was clear that “easygoing” was long gone.

To be fair, ours was not an easy wedding to plan. It had to be carefully calibrated to satisfy myself, my fiancé, my Conservative Jewish feminist mother, my steadfastly egalitarian, Reform-leaning father, and my halachically-minded Modern Orthodox in-laws. There were times when we were so at odds that I honestly thought we would have to call it off. When something came up that halacha had no ruling on, that somehow was left to my discretion, I overcompensated and became controlling. For instance, when the caterer tried to replace the broccolini in our entrée with asparagus, I sent a flurry of emails confirming and reconfirming that the broccolini would stay.

When it came time to pick a song for the first dance, I hyper-analyzed the lyrics of every song we discussed to make sure they reflected the true spirit of our relationship. When the bridesmaids asked about accessories, I told them they would only be allowed simple silver jewelry and strappy, silver or nude sandals on their feet. (In retrospect, their dresses were long and I have no idea what shoes any of them actually wore.) Small details to be sure, but this was our wedding and I needed to feel like I had some say in how it turned out.

There was one more detail that I was set on — the rehearsal dinner. Compared to the rest of the wedding, how hard could one casual dinner be to plan? Of course, we would have nothing to rehearse, as most Jewish ceremonies do not come with a run-through, but that wasn’t the point of a rehearsal dinner anyway — the point was to have our close friends and family toast us in an intimate setting.

It should have been simple. There would be no overtly religious function for the meal, no ceremonial points to disagree over, no music or dancing to raise issues of tznius. We’d have to keep the food kosher and start the meal after the Sabbath, but that seemed easy enough.

Apparently, there are very few kosher restaurants — real restaurants — in the particular corner of New York where our out-of-town guests would be staying. And by very few, I mean none. There are plenty of cute cafes and pizzerias, but when it comes to a sit-down-with-your-friends-and-family-for-a-nice-occasion-type places, pickings are slim. Understandably, my in-laws were uncomfortable co-hosting, let alone attending, if the restaurant wasn’t kosher. What’s more, they would be hosting guests during the Sabbath, and were reluctant to add another event to the agenda, particularly one that involved a schlep from Long Island to Westchester.

We could have made things easy and scrapped the dinner entirely. But I had spent months running around trying to put together a wedding that would make everyone happy, and I had made up my mind. The dinner was going to happen. After much back and forth, we persuaded my fiance’s parents to come, have some coffee, and partake in the celebration, even if they couldn’t partake in the food. The dinner would be at a non-kosher restaurant, but the menu would be free of any overt treif — pork chops, cheeseburgers and shellfish would all be nixed. Everyone was in agreement, until my parents announced the restaurant they had chosen…Legal Seafood. In their defense, they were working with a litany of constraints — the restaurant needed to have a handicapped accessible private room, be close to the wedding hotel, and fit within the budget. I’m sure Legal Seafood had a very nice private room and would have served a very nice dinner. But to my fiancé and I, “seafood,” screamed “shellfish.” All we heard was that we were inviting my in-laws to dinner at “Shrimp, Lobster, Crab, and Co.”

That wouldn’t do at all.

I felt bad creating more trouble for everyone. But this dinner was important, and I was going to push it through. Ultimately, we booked a private room at the hotel where our out-of-town guests would be staying. It had everything — it was convenient, it was innocuous, it was budget-friendly. It made sense.

On the night of the dinner, we arrived at the hotel to find that the event in the function room across the hall from ours had put up a bright blue sign so big it took up half the hallway: “Welcome Members of the Church of Jesus Christ of Latter-Day Saints.” So much for meticulous planning. My parents were, understandably, mortified. But as the toasts began, the unfortunately placed sign, (and the Junior Miss pageant occurring upstairs, with its masses of young girls swarming the lobby in teeny, sparkly dresses), became just one more thing to laugh about.

My Maid of Honor regaled the crowd with a warning about the perils of depriving me of coffee. Our friends poked fun at our penchant for plaid shirts. My mom, who wouldn’t have wanted to speak in front of the large wedding crowd, got the chance to tell us how she felt. I got to tell my soon-to-be-husband just how incredible he is, and thank his parents for welcoming me into their family. And my fiancé cracked everyone up with his football analogy of a toast, a tale of how he had only planned to “pick me up off waivers” to add to his “bench” as a back-up, but ultimately came to realize that I was not just a starting player, I was the only one he needed on his team. I guess that’s what you get for getting married at the peak of fantasy football season.

Ok, ok, it still moved me to tears.