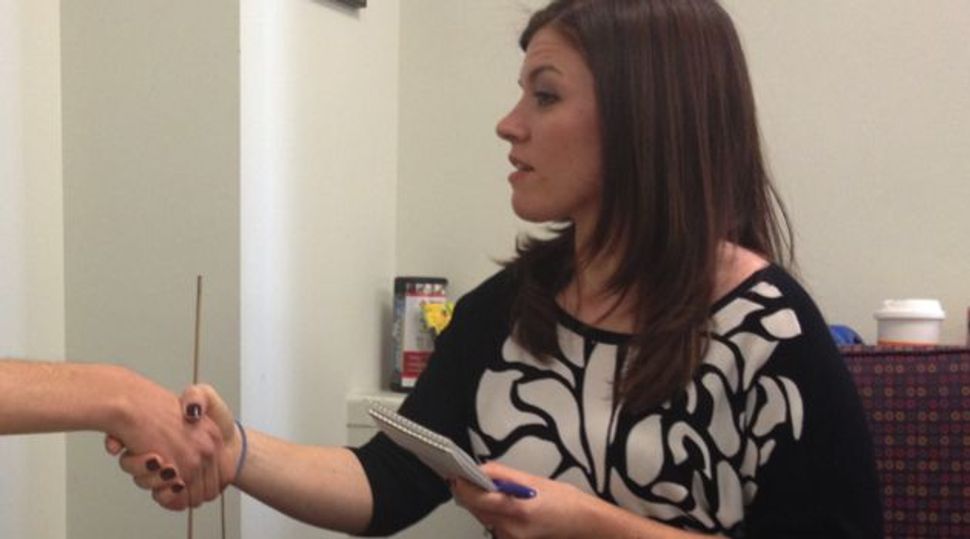 Like every member of the female species, I read Tuvia Tenenbaum’s interview with Racheli Ibenboim, an up-and-coming female Hasidic politician, with great excitement. This is the interview in which Ms. Ibenboim answers deeply personal questions, thereby revealing everything Tuvia ever wanted to know about Hasidic sex.

When I read his highly apologetic, I’d-be-equally-voyeuristic-when-interviewing-a-man response to all the criticism hurled at him, I was reminded of this one time I interviewed a famous male Hasidic wannabe politician under the pretense of writing a profile about him.

But before I begin, let me tell you a little bit about myself.

To start with, I was not raised in a secular world where poking and prodding strangers about their wedding nights is common practice. I’m a “progressive Jew” by default but not by education. I come from a long line of men and women who prefer not to discuss their wedding nights with strangers. I grew up alongside the most renowned gatekeepers of wedding night sex of the ultra-Orthodox world and I was groomed to become one too. But with the years I have come to the conclusion that what they have taught and preached had more to do with common decency than with Judaism. And so I left them.

Now let’s talk about the interview with Plony Almony (his real name is irrelevant).

We meet at a café on the outskirts of town. Mr. Almony, after all, is a popular man. Luckily, no rabbi knows that I’m in town and no one has forbidden Plony from meeting me. A man, as every child of God knows, never shakes hands with women, unless she is his wife and he is not on his period. So when I approach Plony, I extend my hand to see whether he is menstruating.

He is not, and I am shocked that he would reveal that so soon into our meeting. For shame!

I get right to it.

“How does this work, this sex thing? You didn’t know your wife-to-be but you married her, a woman, and you were supposed to have sex with her. What went on in your head? Were you scared?”

Plony blinks, stares at me for an uncomfortable few seconds and asks if I am demented.

I blink back and continue.

“How does something like this work in practical life? You never touched the woman and now — how does it feel?”

“How is it supposed to feel?” he asks. Whoah, he’s bold. “It feels like every first sexual encounter does. Awkward. Good. But mostly awkward.”

He pauses, smiles sheepishly, and asks if we can move on now.

“It was tough at first, this new life. But I got used to it, eventually. Life, you know.”

“Used to it? As in, there is no excitement in your marriage? And what about love?”

“I don’t know why you want to know all these things…” He’s still smiling. I take this as a sign to patronize him.

“You’re a special man, and that’s why I don’t let go of this topic.”

“Special man?” he asks. “This is the first time anyone has ever called me that. Thank you so much!”

And with that, we wrap up our interview.

To be sure, we also talked about his community in the greatest of details and about an organization he’s involved in. But that’s completely irrelevant to his profile so this isn’t included here.

Please, don’t rush to “protect” Plony, as if he were a fragile thing in dire need of some secular Jew’s protection. Just don’t. Remember that the rabbis of the Talmud had opinions about penis size, and therefore it is okay to question a soon-to-be-famous man about his wedding night.