Too Sexy for Purim? 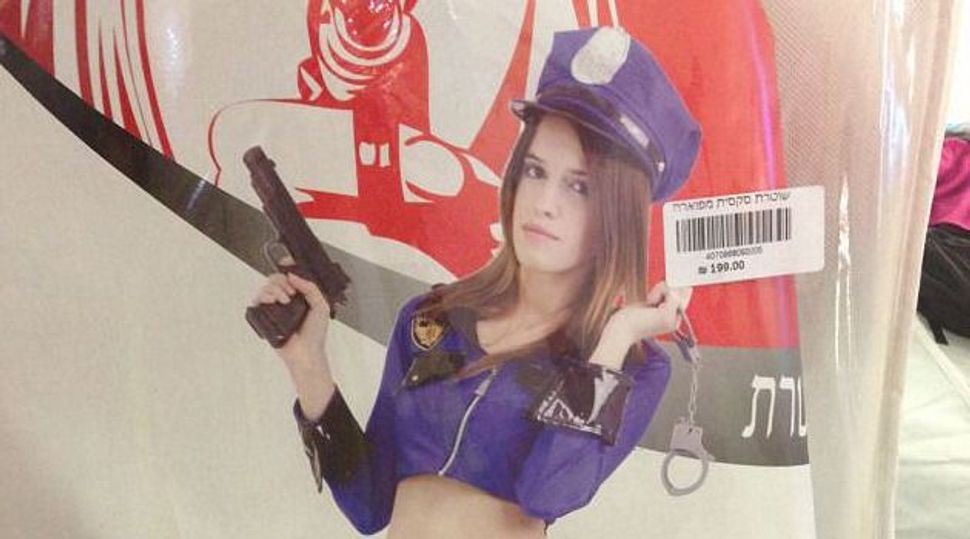 (Haaretz) — It seems terribly appropriate that International Women’s Day was happening this year as Israelis were caught up with preparations for the holiday of Purim — and not just because it is the only Jewish holiday with a woman, the heroic Queen Esther, who saved her people by charming a king, at its center.

On one end of the spectrum there is the ever-present issue of ultra-modesty and fundamentalism and how that plays into the preparations for Purim costumes. Just before Purim of 2012, when the awakening in Beit Shemesh that sparked showdowns regarding “exclusion of women” was fresh – a fierce backlash took place regarding advertisements for Purim costumes in community newspapers aimed at the Orthodox population.

It had become the norm in such publications for advertisements for costumes to be divided into two. On one side: pictures of lads dressed as cowboys or pirates with smiling faces. On the other, girls covered in tulle fairy, bride or princess costumes – with their faces blurred out.

Over the several years, the women in Beit Shemesh and Jerusalem at the forefront of battling extreme modesty in the public sphere have spoken out against the phenomenon, covering the Facebook pages of the toy stores that allowed their advertisements to be altered with their complaints and pointing out the disturbing trend in the mainstream media, and in some cases, even eliciting an apology.

This year, Nili Phillip took action early when her local Beit Shemesh paper, called Tmura, showed up on her doorstep several weeks ago with blurred faces of little girls. She decided to “make a big stink” and complained to the editor – who is modern Orthodox – for kowtowing to ultra-Orthodox standards. The next week, the ad ran complete with little girls’ faces.

“It just goes to show you that when you push back just a little bit, you can create change. For so long we told ourselves ‘that’s the way it is, there’s nothing you can do.’ It’s so not true, and such a cop-out. If you speak out and say ‘No, it is not acceptable,’ you don’t ignore it and you aren’t going to be quiet. You don’t have to be militant about it – it’s just basic decency. A line was crossed a long time ago, and the fact is that wiping out little girl’s faces is just obscene.”

But obscenity cuts both ways. In secular Israel, periodic outrages erupt over what many people see as the extreme sluttification of Purim costumes for women and girls.

A friend with twin boy and girls summed up the differences in costume options presented to her as laid out in the store catalogue. For the boy the options were policeman, ninja fighter, soldier, palace guard, soccer player, a lion or a tiger.

For her little girls to choose from: Little Red Riding Hood, a bride, girl with a lollipop, assorted Disney princesses, and angel. And regardless of the specific costume, the girl’s options were all midriff-baring, corseted, short skirted outfits with plunging necklines.

This year, critics have specifically taken on the degradation of professional women, because after all, it sends a disturbing message to little girls when they are told dressing like a policewoman means baring your stomach and wearing miniskirt — an outfit that looks less like a real policewoman than a stripper dressed as a policewoman.

So are these really the alternatives for our daughters? Being covered from neck to wrists with her face blurred out, or dolled up in a micro-miniskirt and fishnet stockings and handcuffs as a sexy policewoman, or, better still, with glittery handcuffs as her “sexy prisoner”?

The complaints abound – I know mothers who aren’t religious or conservative in any extreme, the kind who would be outraged by the blurred-faced ads – taking the store-bought costumes and adding fabric to the necklines or skirts – or choosing the alternative of making the costumes themselves or hiring a seamstress.

Too Sexy for Purim?