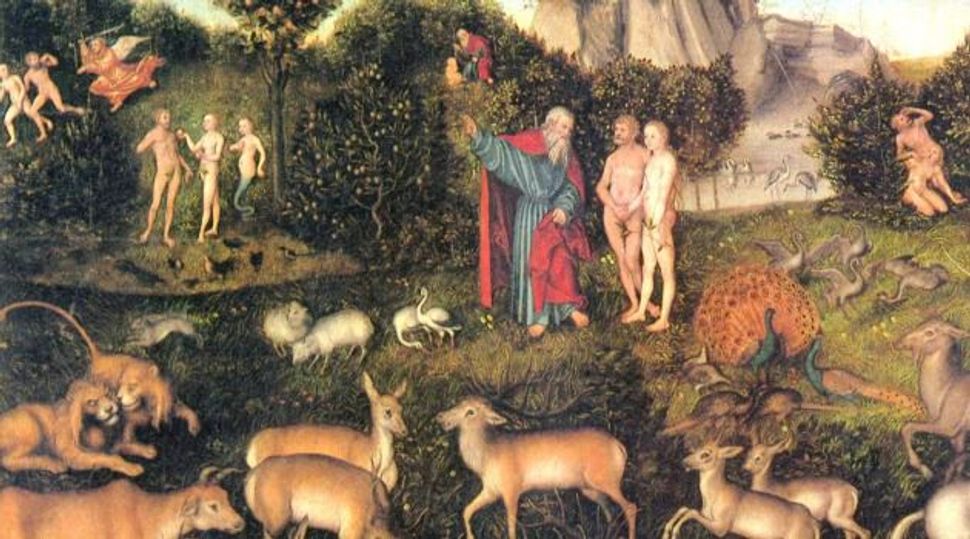 Image by lukas kranach the elder

(JTA) — For some Hasidim, the Torah is too hot to handle.

A recently published Bible study guide in use in a Hasidic village in suburban New York omits certain risque passages and entire passages of the Book of Genesis, according to Israeli scholar and blogger David Assaf of Tel Aviv University.

The censored chumash, or Bible, was printed for Beit Tziporah, a girls school in New Square, a village of Skverer Hasidim in New York State’s Rockland County.

For example, the chumash edits out a section at the end of Genesis 19 in which Lot’s two daughters get their father drunk and sleep with him so they can get pregnant. The chumash also omits the entire first two parshas, or Torah portions, of Genesis, cutting out the story of the world’s creation, Adam and Eve, Noah and the Tower of Babel, beginning instead at the story of Abraham.

Is this because the first two portions are about non-Jews?

Among other omissions in the chumash: The story of Onan, who spilled his seed rather than impregnate Tamar; Judah’s sexual encounter with his daughter-in-law Tamar disguised as a prostitute; and Potiphar’s wife’s attempted seduction of Joseph.

Meanwhile, other seemingly risque stories are left in, such as the tale of Dina’s rape, Assaf notes.

To be fair, this edition clearly is intended as a study guide, rather than a full account. Each of the verses intentionally leaves one word blank, for the girls to fill in from memory.

I suppose the girls aren’t expected to commit to memory the wholesale passages that have been omitted.