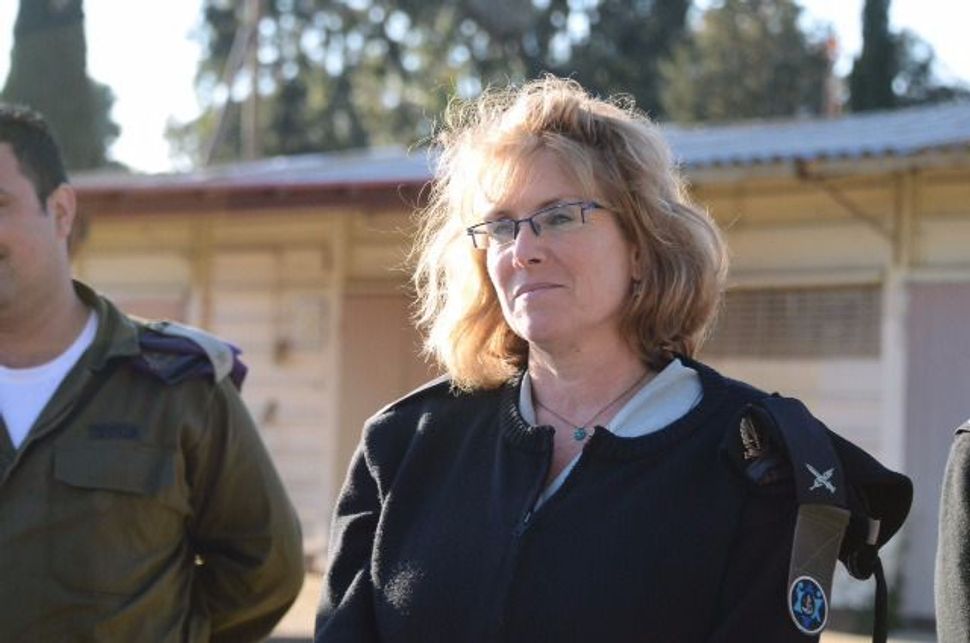 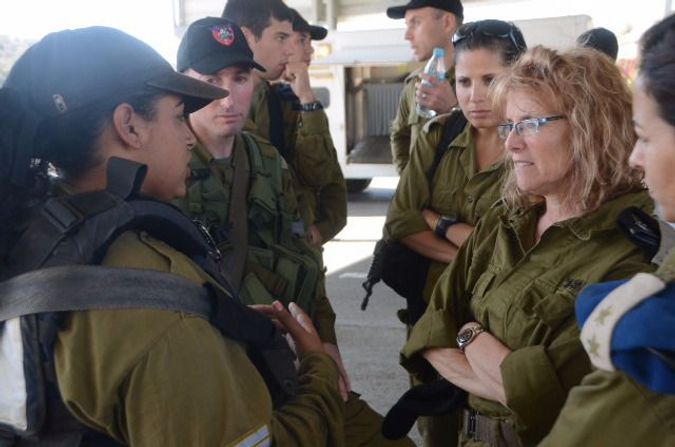 You would think that spending two years as a field commander would be enough time in the Israeli military. But after returning to civilian life as a lawyer, Rachel Tevet-Vizel found that there was something missing. “In Israel, it is not enough to be a lawyer,” she says now. “To contribute to this country, you have to be a lawyer and something else.” Today Tevet-Vizel goes by the title of Brigadier-General, and is one of the four highest-ranking women in the Israeli Defense Forces. Serving as the army’s chief gender advisor, she oversees all matters of gender and women’s issues for the soldiers who serve in the IDF.

This is no small task. Whatever your politics, when it comes to gender, the IDF is among the most progressive and inclusive armies in the world.. Lesbian and gay soldiers, for instance, were fully integrated into the Israeli army decades before the United States repealed its Don’t Ask, Don’t Tell policy in 2011. 92 percent of the IDF’s combat positions are open to women. Today, as transgender issues take the fore, the terrain is shifting yet again. The Sisterhood’s Rachel E. Gross spoke to BG Tevet-Vizel about the IDF’s opportunities for women, how to combat gender discrimination, and her approach to transgender soldiers who are beginning their transition during their service.

Rachel E. Gross: What does it take to make progress for women in the IDF?

BG Rachel Tevet-Vizel: When I was in the army for the first time, there were only a few women in high ranks. I think that’s wrong for the country and I think it’s wrong for the army. In the last decade we’ve had a tremendous progress in this issue. Today, for example, 40 percent of the intelligence forces are women. We have women in combat positions, women as warriors, women as pilots, women in the navy, women in artillery. Iron Dome, for example, is 30 percent women.

Getting more women into these places requires making real changes. For example, if we want women in combat positions, we need special vests for them. It cannot be the same vest for a man and a women. We need special equipment for women. These kinds of things seem small, but it really affects the way they can serve in the army. I think that there is progress, but there are a lot of things that we can do. It’s not enough yet.

What are some other things you could be doing?

That’s a good example for where we are today. They are part of what’s going on. I think this is an important thing. And this is my goal: more women in those places, doing their job. It can be education, it can artillery, it can be anything. But they should be part of everything. In most places today, 92% of the professions in the army are open for women. It’s something that happened in the last five years. 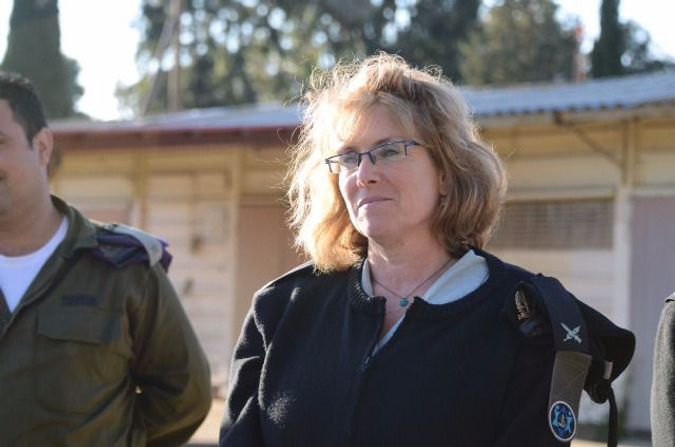 What is the role of technology in integrating women into the army?

Technology is something where gender doesn’t matter. You don’t need muscles, you don’t need to be a warrior in the battlefield: you need your brain. Right now we have a big project with the Ministry of Education and the Ministry of Science that takes young girls at the age of 16 or 17 and encourages them to go into technology. They train them in technology, and then they come to the army and are in all kinds of units that deal with technology. I think that’s a great step toward equal opportunities in the army. For the women, it’s also a great opportunity for them later in their lives. I know for sure that women who are in technology units in the army get very good occupations when they leave the army.

You’ve talked about how the IDF is good for women. How are women good for the IDF?

First, it is a very practical thing. Women in the IDF are 33% of the manpower. It’s going to be a big waste for the army not to take those 33% and put them in all those places that they can be part of the mission of the IDF. It’s a waste of good people that can do the job. Secondly, if we are really talking about equal opportunities, they should be there. It’s part of being there, being part of what’s going on. The third thing is that making good decisions depends on hearing all the voices, including women’s voices. This is one of the reasons that I want more women in high ranks in the army, so they have a real influence on what’s going on in the army.

Unique problems arise from having women and men serving together. How has the IDF dealt with sexual harassment in the past few years?

We have a very strict policy against all kinds of things that you can call sexual harassment. In each unit, we have a person who is something like a representative of the gender adviser in his unit. Three years ago, we opened a special center called Mahut, which deals with sexual harassment in the army. You can call the center directly without first going to your commander. For example, a soldier who was attacked by another soldier can call us, and we will take him to the military police and give him the treatment he needs. A few weeks ago, I got a call from a general from the American army, saying that she wants to come to visit our center and learn from the IDF how we’re treating these cases of sexual harassment.

In combat units, there are actually less cases of sexual harassment compared to the rest of the army. That’s because they are like brothers; they are fighting together, they are part of the same unit. Interestingly, something like 10% of the harassment cases we face are men, not women. Overall, we have less cases of sexual harassment than other big organizations in the country, such as the police, but we have them. Each one of these cases is dealt with, with very strict policies.

Because the IDF is the only army in the world with mandatory service for men and women, you’ve had much more time to adjust to these problems. Do other countries come to you for advice?

Every year in May or June I give a lecture at the NATO Committee on Gender Perspectives. At the Committee, delegates from all kinds of countries and armies around the globe come to me and ask about women in combat zones—about dealing with sexual harassment, women in technology, recruitment, social rights for mothers, maternity leave. In 2016, Norway is planning on becoming the second country in the world to institute mandatory service for men and women. I’ve been talking with the gender adviser from the Norwegian army and advising them. For them, they talk about equal opportunities as the reason of having a mandatory service in Norway.

How has the Israeli army worked to integrate LGBT soldiers?

Recently, we have been fielding cases in which people have come to us saying they are transgender, and are in the middle of a process. The issue is that, according to the law of Israel, you cannot have an operation to change your sex before the age of 18. And at the age of 18, you are already in the army. So, if someone will come to us and said, “I am a man already,” or “I am a woman already,” we can treat them as they are. But most of these individuals are doing the process while they are in their service. So the challenge is trying to adjust his condition of serving in the army to the process that he is doing.

If a man comes to us who wants to be a woman but hasn’t yet had an operation, we ask him: can he prove to us that it’s a serious process? What are his needs? For example, if he wants to be a women, hey may want to go with long hair, or wear a women’s uniform—these things not allowed for men in the army. So we will give him a special permit that says that’s okay. Or he may need a special shower. So we will change the place he is going to serve in so he can be in a place where he can go home and can take a shower in his house. So we’re trying to adjust. We’re trying to understand what’s going on. Progress and tolerance are the key words.

In many ways, the army is ahead of Israel when it comes to progressive policies. How does what happens in the army influence the greater Israeli society?

We are ahead of it. We are far more tolerant than the other places in the country. What happens in the army influences what happens in Israeli society, and is in many ways the future of Israeli society. More people in the army are exposed to people who are different from them. They learn to be more tolerant. For example, if you are a commander in a combat unit and you have under you a very good soldier that is gay, he’s part of the unit. You understand that they are part of it and there is no real difference. You understand it’s the same; it’s not an issue. There are commanders who are lesbian or gay, so a soldier can look up to them and say “My commander was gay, so what?” There’s no issue. That’s part of his education. So you’re going to understand that and take it with you after your service.