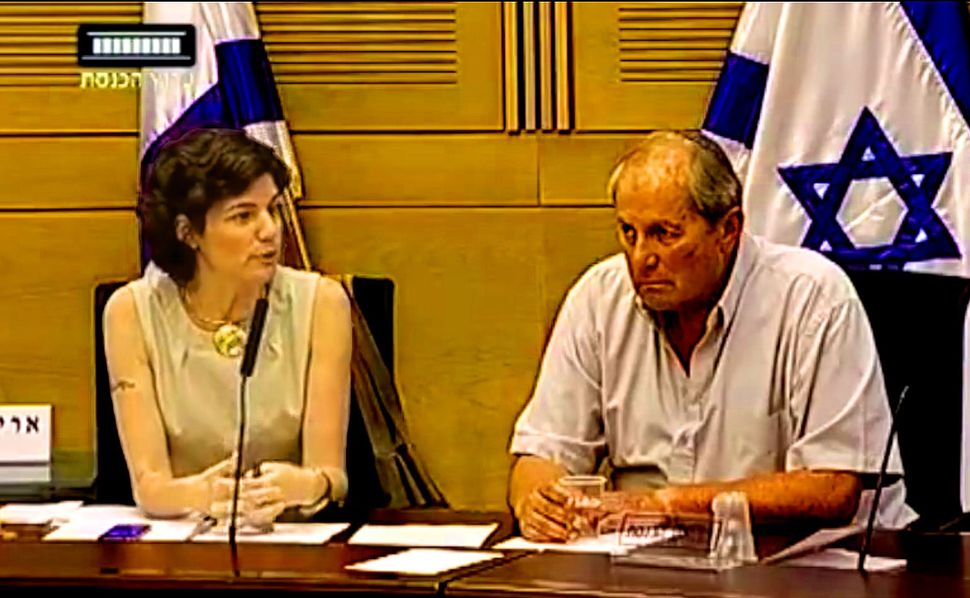 Have you been witness to men in the workplace behaving unprofessionally and immaturely?

Well, Israeli women members of Knessets (MKs) are not having any of it.

But this week, Meretz’s Tamar Zandberg had to put another grown man in his place after totally suffering through his completely infantile behavior.

At a meeting of the Committee on Drug and Alcohol Abuse which Zandberg chairs (she is the first head of the committee who is pro de-criminalizing Marijuana), she had an altercation with head of Israel’s Anti-Drug Authority former MK and apparent 65-year-old toddler Zvi Hendel.

Zanberg asked a very legitimate and disconcerting question about the director-general of the Anti-Drug Authority (a government organization, paid for with taxpayers money), who has been on paid leave for a whooping eight months, due to allegations of corruption. Zanberg asked, how long will his leave continue, and what is the salary he is receiving.

A pretty easy question. Hendel’s response? “Once you explain to me how come a person who supports smoking drugs of all kinds becomes the chair of a committee that fights drugs, I will explain the rest to you.” he waves his hand dismissively, not even making eye contact.

As applauds erupt from the crowd over Hendel’s remark, Zanberg patiently starts to reply, “You can forward your question to the coalition agreements.”

“Excuse me, anyone who clapped, please leave right now.” She asks security in the room to escort them out.

Zanberg asks the question for a third time, and Hendel responds: “no clue,” and a few minutes later mockingly imitates her.

A grown man, a CEO, mocking a Knesset member like a child. Actually, most children are mature enough to know better. Zanberg stares at him incredulous. It’s too much, it’s unbelievable, but we have a video that proves it did indeed happen.

“With profound regret, I’m going to have to ask you to leave,” she says.

She adds: “I was a parliamentary aid for five years and an MK for two, and I have never seen an invited guest who disrespected the chair of a committee to this extent in a chauvinistic, disgraceful manner.

Professional and firm! Bravo, Tamar! And to that women across the globe responded “YAAAAS” and high-fived. The end.

I have an unfortunate surprise for you. Apparently, some women in Israeli media thought that this tour de force was a good opportunity to criticize Zandberg’s behavior and dress.

Over at NRG, a reporter called Zandberg’s feminism too strident. She should’ve been more manipulative, more humble and softer about it, writes the reporter. She suggested that while Zanberg’s feminism has good intention “the road to hell may be paved with good intentions.” Really?

But it was Hila Kobo, Walla News’ most un-feministic self-proclaimed feminist, who really stood out. Wearing a blazer over a T-shirt OR TANK TOP? she suggested that Zanberg may have been right in her consternation towards Zvi Handel, but wasn’t she dressed provocatively and unprofessionally while doing so. Must she “flaunt her tattoo”, Kubo asks? “And what about a dress code “isn’t it [Zanberg] and her youthful friends in the Knesset who sometimes fashionably discriminate in favor of women and to the detriment of men.”

Kobo went on to say that women in the workplace have way more freedom, that they wear short dresses “because it’s fashionable and sexy to expose a curve or two.” I love it when women in the name of “feminism” reduce all women to fashion fiends who just want to appear sexy to other men.

Good job on using the oldest trick in the book, policing how women speak or dress instead of listening to what they’re actually saying. And even using it inaccurately, because Zanberg was not wearing a sleeveless t-shirt as Kobo claimed, but instead a formal sleeveless dress. The Knesset does have a dress code, and as of 2006, it does not allow sleeveless shirts, t-shirts and shorts.

It’s time for women to stop with the click-baity nitpicking, instead of applauding the small, but incredibly important thing Zanberg did during that committee meeting. 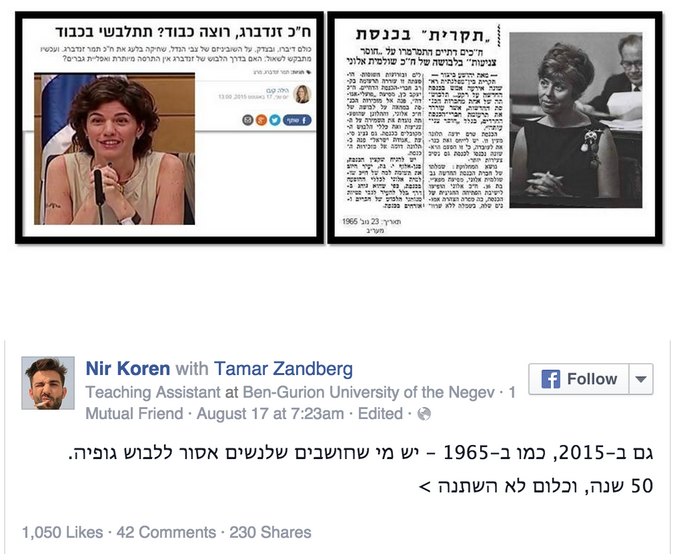 Firstly, it’s important for women in the workplace in general, many of whom have to deal with immature and inappropriate behavior from men that would never be acceptable for women. It’s also behavior that, were it directed towards a man, would have much worse consequences. Zanberg put this man, who really should’ve known better, in his place. There was a correct and professional way to voice his opinion. She even told him the channels for it.

But more importantly, by kicking Hendel out of the meeting, Zanberg did what she was trying to do by questioning t he eight months of paid absence of a highly paid government official. She wanted respect for the time and money of the public that elected her.

She wanted to get work done. Her behavior was completely on point and professional. No one disputed that – and yet, no one adequately praised it either.

The bottom line is, you want any paid government official to behave in the way that she did, to have a mature, professional and yet respectful attitude. Because chauvinistic and childlike behavior makes a workplace less productive.

Zandberg’s behavior in that committee showed her complete and unwavering respect for the Israeli public that elected her— so shouldn’t that public show her the same respect?