Why I’m Shocked and Inspired by Kids4Peace 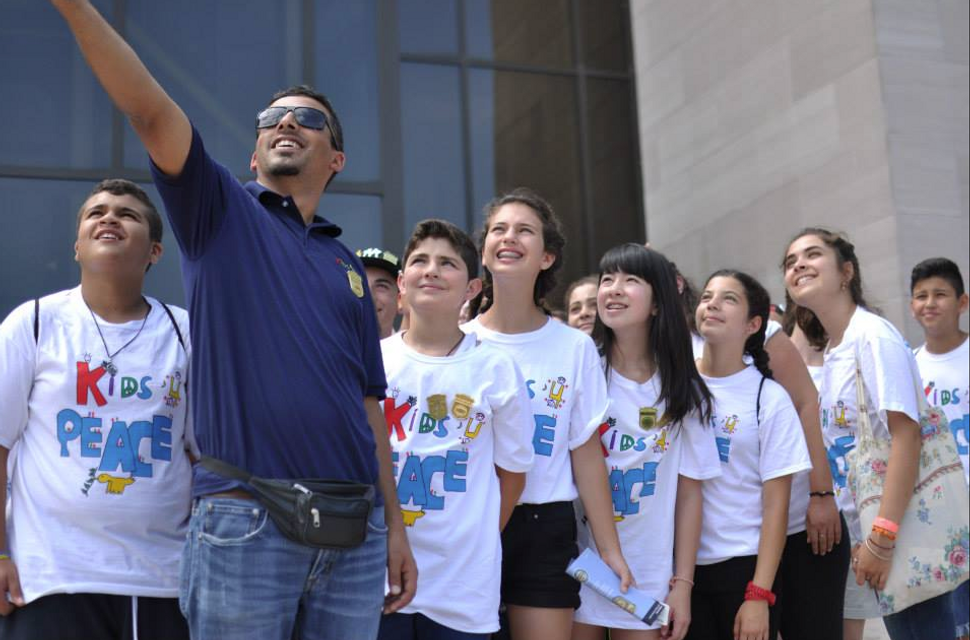 Last Thursday, at a meeting of parents of Kids4Peace, I had a remarkable experience that both shocked me and inspired me. It’s unique Jewish-Muslim-Christian camp for residents of Jerusalem and its environs, in which my daughter participated last summer. Over the last year, the children have met regularly and their parents have met simultaneously in adjoining rooms. It has been an eye-opening experience, a powerful reminder of the importance of getting to know people around you — especially people who are different from you.

This sounds like such a simple concept. But it is a remarkable fact of life in Israel that Arab and Jews who are sharing the same air and the same space and the same hot, daily grind, whose lives are so intricately bound up on one another, for the most part barely speak to each other.

One of the most precious aspects about the Kids4Peace parent meetings is the discovery that, as parents, we are all pretty much the same. We all try to get our kids off the computer, we all try to get them to clean up their rooms, we all live for school plays, academic presentations, sports games, and we all really just want a nice life for ourselves.

Still, Thursday night, October 22, was a little different. This was the first time we were meeting in a context of violent tension. Many people at the meeting said that they don’t remember a time when Jerusalem was this edgy: when life had completely come to a halt as everyone seemed to be staying home.

People are so anxious right now that Kids4Peace held a phone meeting for parents a few days earlier, under the assumption that most would not want to come in person. Significantly, Thursday’s group proved them wrong and, despite the surrounding events, some 60-70 parents turned up, from all sectors of society.

As people began sharing feelings and experiences, one Arab woman described a scene that really shook me. She had been looking after her elderly father in the hospital for the past few weeks, which gave her a ringside view of the comings and goings in the hospital around terror attacks. One day, when a female soldier had been stabbed and badly injured, the hospital staff made visitors make room for them to wheel the victim through the corridors. As she stood with her 8-year-old son she had a jarring conversation with him. He assumed, she told us, that the victim was an Arab woman. The mother said, “No, she’s Jewish”

“I don’t understand,” the child replied. “Why would a Jew stab another Jew?”

“No, no,” she gently explained. “The attacker wasn’t Jewish. He was an Arab.”

The boy could not comprehend this. His mother recounted that in his mind, the only violence that exists is Jews hurting Arabs. This is all he knows, and it’s all he has seen. He had no idea that the violence goes the other way, too.

When he realized his mistake, he said, ”That’s okay then.”

The woman, who is a long-time peace activist from Jerusalem who currently works in hi-tech, was also shocked by part of the conversation. And she said plainly, “I failed as a parent.” How can her son ever justify violence, she painfully wondered out loud.

Still, I don’t think she failed at all. First of all we cannot control everything our children see and experience. Second, she is trying to have compassionate conversations with her son and instill in him a deep sense of shared humanity — which is I think what many of us are trying to do. And let’s face it, considering the social and political tensions we are living through, it is a hard task. I told her, in the way so many of my female friends are constantly telling one another, to be kinder to herself. Still, she was shaken by the discovery that her son had it in him to believe that sometimes violence is okay, if it sort of “balances the scales” so to speak.

I was shocked because I could not believe how different the world looks for Arab children and Jewish children living in the same city.

Jews like to deny this. When “numbers” of killed and injured on both “sides” are counted, Jewish pundits will go immediately to arguments of self-defense. Israeli news outlets frequently report only numbers of Jews dead, not Palestinians. News reports say, “There was an attack. No casualties reported; three terrorists were eliminated.” So actually, three Palestinians are dead, but their deaths don’t count as deaths if we can call them terrorists. Nobody dead means nobody Jewish dead. It is chilling that this is standard reporting in Israel.

Why are we then surprised that in the Palestinian community, they do the same thing? Why do Jews have so many media watchdogs to correct Palestinian narratives when our own narratives are just as skewed? It’s all messed up.

Plus, there is something even more chilling in this new round of violence in that so many of the terrorists are kids. I cannot conceive of a 13-year-old boy as a terrorist. I don’t know how he got to be a knife-wielding, but we cannot simply label a 7th or 8th grader as a “terrorist” without asking difficult questions about how he got to where he is. I don’t know the stories of these teenagers committing acts of violence, but I do understand that their families and friends will mourn their death regardless of their weapons. Israel may not count Palestinian dead as dead, but we should not be surprised that 8-year-old children witnessing events certainly will count their dead as dead.

One of the opinions shared by almost everyone in the group was that there is an awful lack of leadership — on both sides. When Palestinians said that Israelis need to elect better leaders, I could feel myself sinking into my post-election depression. Bibi again? What’s worse, he won precisely because of how successfully he instilled a fear and hatred of the other in Jewish Israeli minds: Run to the ballots because Arabs are voting in swarms, he effectively told voters on Election Day. And it worked! When people in the group last night said, “Elect different leaders”, all I could think was, I wish I knew how.

Significantly, it seems from our discussion that the Election Day experience has had a powerful impact on this current wave of violence. The dreadful validation that Arab Israelis — citizens and taxpayers of Israel — are still viewed by Israeli leaders as “the enemy” was a slap in the face to so many people. I totally get that. Rather than embrace Arabs who want to create a normal life for themselves in Israel, rather than look for ways to build bridges and find common ideals and passions, Bibi time and again reverts to the narrative that all non-Jews are potential enemies. Bibi created this nightmare that we are all living in.

Still, I said that I also came out hopeful. And that is because despite all of this, there are still many people (many? I don’t know exactly what many means, but enough to fill two large rooms with engaged conversation) on both sides who believe that another way is possible. There seems to be a growing number of people who are willing to think differently from friends around them, who are willing to challenge traditional narratives that we have all been fed about the “other” in society, and who are willing to consider perspectives other than their own.

This makes me hopeful because, previous elections notwithstanding, I think we are living in changing times — times when social media creates blink-of-the-eye awareness of events and at times unexpected relationships. Although researchers are mixed about whether social media makes people change their views on things or whether it creates millions of echo chambers, I think that it is impossible not to be influenced, even a little, by the volumes and volumes of ideas and perspectives that come through our personalized news feeds. It’s just not possible that we are not all changing, even a little, as we learn more about others. We are exposed to so much stuff all the time. And sociologists generally confirm that we are all becoming a little less driven by traditional communal affiliations and are instead redefining boundaries of affiliations, creating our own customized connections and communities. I think maybe this creates new opportunities – like the Kids4Peace parents meeting – for all of us to come to new understandings and new awareness.

At least I can hope. Hope itself is an idea worth hanging onto at times like this.

Why I’m Shocked and Inspired by Kids4Peace