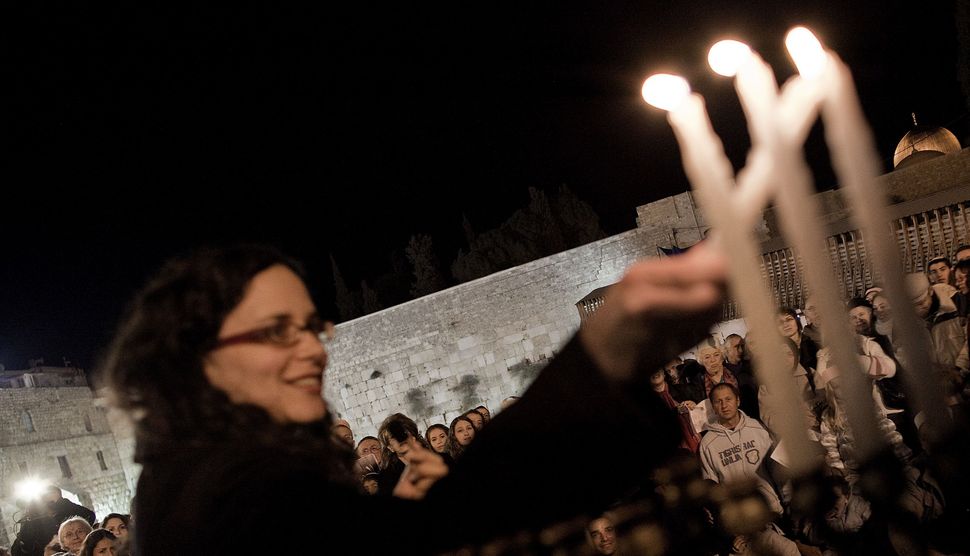 A Hanukkah near-miracle reminds us of feminist divisions

The quarter-century-old feminist prayer group Women of the Wall was on the receiving end of its very own Hanukkah near-miracle this week, when Israel’s attorney general’s office ordered the Kotel rabbi to include women in the state’s official Hanukkah ceremony.

Women of the Wall launched a campaign in November, “It’s My Right to Light,” railing against the exclusion of women from the annual event. Kotel Rabbi Shmuel Rabinowitz “invites ONLY men to have the honor of lighting and blessing the candles — and the ceremony is held in the men’s section,” the campaign site explains.

Their push got the backing of lawmakers Tamar Zandberg and Michal Rosin from the leftist party Meretz and Ksenia Svetlova from the Zionist Union. It was also complemented by another, separate campaign when the Center for Women’s Justice petitioned the attorney general’s office to act, a call they also made last year. Pushes came to shove, and on Tuesday, Deputy Attorney General Dina Silber called on Rabinowitz to provide a list of possible female invitees to the ceremony, which begins when Hanukkah does on Sunday.

Yet, it wasn’t quite the full-blown miracle. Rabinowitz reportedly responded to the letter saying that female cabinet ministers Gila Gamliel and Miri Regev would be taking part in lighting the menorah, but that women would not be included in the ceremony at the men’s section.

On their Facebook page, Women of the Wall are calling on supporters to come to the holy site on the first night of Hanukkah to kindle a flame in defiance.

That wasn’t it for the week though. In related news, Original Women of the Wall, a splinter group, filed a Supreme Court petition challenging the legality of women not being allowed to read from the Torah at the Kotel, Haaretz reported. The right to read Torah at the Western Wall is a major struggle of the movement. According to Women of the Wall’s Facebook page, they managed to sneak Torahs into the Kotel’s women’s section six times this year.

So by any stretch of the imagination, it was a dramatic few days for this particular feminist struggle. Though the Hanukkah ceremony story made headlines, however, getting a lot of flack in the Haredi press, it hardly ruffled the feathers of the average Israeli. When the attorney general’s office sent its letter to the Western Wall rabbi, it wasn’t touted all round as a major feminist coup. It wasn’t the story of the day. It certainly wasn’t the story of the week.

The ongoing fight of women to pray as they see fit at the Kotel is pretty niche by Israeli standards. Women of the Wall have dedicated supporters on the other side of the Atlantic, who cheer when a Torah is snuck into the women’s section of the Kotel, much to the chagrin, or downright offense, of Orthodox worshipers. In Israel, their victories get far less attention.

The short answer to both of those questions is no. There are plenty of feminist causes that Israeli women and men get out of bed and onto the streets for. Take the recent case of a woman being filmed having sex with multiple partners at Tel Aviv nightclub Allenby 40, which had protesters demanding the place shut down..

Or this summer’s viral online protest over Israeli schools banning teenage girls from wearing shorts too far above the knee lest they “distract the boys.”

Perhaps the answer lies partly in the size of Israel’s Reform movement, with which Women of the Wall is widely associated (though the group defines itself as pluralistic, not Reform). According to the Forward, Reform Jews make up less than 4 percent of Israel’s population.

Israelis tend to be traditional and religious or secular. So while American Jews, 35% of whom are affiliated with the Reform movement, follow the struggle for an equal Kotel prayer space with great interest, in Israel it remains a sideline issue.

The lack of broader interest and support for this struggle reflects divisions among Israelis, and in turn, division among feminists. Ultra-Orthodox Jews, for one, don’t support the goals of a group like Women of the Wall, who they see largely as provocative troublemakers. And secular Israelis, on the whole, don’t relate to them.

Which is a shame because women lighting candles at the Kotel isn’t inconsequential. It is a matter of feminism, of pluralism, and yes, of equality.