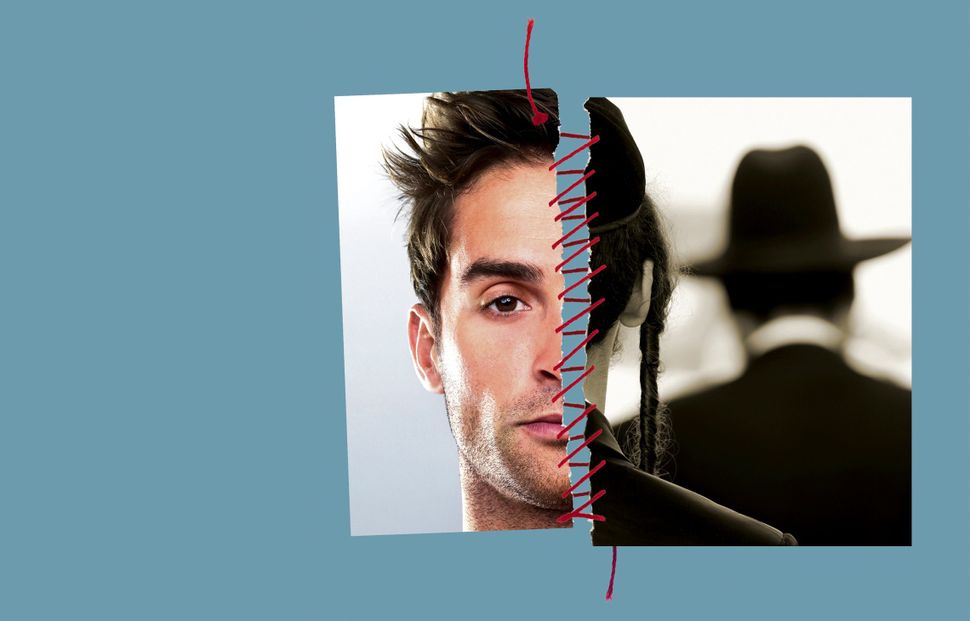 Just when I thought I was ridding myself of my past, it rushed back at me with a single phone call. It was late evening during the fall of 2012. I had been out of the Hasidic world for five years, now living in Bedford Stuyvesant, Brooklyn, and was making progress with forgetting, moving on. Then the call came.

The man on the other line – call him Mechel — was a member of my old Hasidic group, the Skverer Hasidim. He was also royalty: a junior member of the rebbe’s family. I knew him well, although we’d never spoken. Several years older than I and in a considerably higher class, he and I had had little in common.

“I wanted to wish you mazel tov,” Mechel said. “I saw your son had an aliyah last Shabbos.” My thirteen-year-old boy, who lived with his mother in our old Hasidic community and with whom I had little contact, had been called up for the Torah reading. “For his bar mitzvah,” Mechel added helpfully, in case I’d forgotten the protocols.

I thanked him, feeling genuinely touched. The call was brief, no longer than a minute, but this man, whom I hadn’t seen in so many years, forced a rush of memories from a time and place that felt, all of a sudden, real and present again. Memories I had been trying to suppress. To forget. Clearly, I was bad at it.

Memory, for better or worse, is central to humanity. And it is central to the Jewish consciousness, which this month of Tevet, beginning as Hanukkah ended and extending into January, speaks to uniquely.

Rabbi Eliyahu Kitov, in his classic Sefer Hatoda’ah (The Book of our Heritage, in English), calls Tevet a “Month of Pain,” due to its three successive fast days — two of which, the eighth and ninth days of the month, are Ta’anetei Tzadikim, fast days for the righteous, and the third, the Tenth of Tevet, a public fast for everyone. The three fasts are for the memory of painful events: the translation of the Hebrew Bible into Greek during the third century B.C. by order of King Ptolemy (and thus, the rabbis believed, losing its essence in translation), the deaths of the prophets Ezra and Nehemia during the fifth century B.C. just as the second Jewish commonwealth was getting under way, and the beginning of the siege of Jerusalem during the sixth century B.C. by the Babylonian king Nebuchadnezzar.

When we think of our monumental national catastrophes, we tend to think of the summertime month of Av, during which we mourn the destruction of the first and second temples in ancient Jerusalem. Tevet, however, highlights the centrality of Jewish memory in a more subtle but arguably more profound way: it is not about our cataclysmic wounds, but the more prosaic pains —the pin pricks, the sprains, the aches, the everyday illnesses in the memory of our people.

Tevet contains a somberness of tone more consistent with the totality of Jewish memory; not grief, but despondency. It is less about tragedy, and more about a history of wintery gloom.

In many ways, the modern-day journeys of those who part from ultra-Orthodoxy echo the historical Jewish experience in microcosm: alienation, displacement, and the tensions of holding onto the past while looking to the future. It is not simply the replacement of values and beliefs, but a profound transitory experience of both body and mind.

Of my own experiences, one memory stands out — an evening in May 2005, when I was summoned before the rabbinical court of my town and community, the all-Hasidic Village of New Square, and delivered an edict of expulsion on charges of heresy. While in a larger sense, I, myself, wanted to leave that community, the order of expulsion left me feeling alienated, exiled, subject to a future of physical and psychological wanderings. To be forced not only from your home but from the nearness of friends and family, from the landscape familiar to you like your own skin, from the only world whose cultural rhythms you truly know and understand, is to be left feeling uprooted and disoriented.

As I walked home that night, before I could break the news to my then-wife Gitty and our five children, I was struck by the irony of the rabbis’ order. Jewish history — Jewish memory — is replete with the traumas of expulsion: England in 1290. France in 1306. Spain in 1492 and Portugal in 1497— and the many smaller scale Anatevka-style expulsions from towns and villages across the globe. The rabbis issued their edict as if it was a fairly innocuous matter: heretics could simply not live among the faithful. To me, however, it felt like an encounter with the many historical acts of persecution, events that cannot be excised from memory.

I think of this in response to a question I hear often: “Why live in the past? Why don’t you just move on?”

You can often see it coming: there’s a look, a curl of the lip, a dismissive flick of the wrist. It is meant to end the conversation.

“If you no longer want to be Orthodox, why must you go on and on about it?”

It’s one of the standard rejoinders from the faithful to those of us who have chosen to leave our former insular, restrictive, and religiously rigid lives, but choose not to be silent about it. It is as if we are being asked: Why must you retain your memories? They are so troublesome, so inconvenient for the rest of us.

The issues themselves don’t appear to matter — the problematic dogmas, the oppressive rules, the societal dysfunction, the great cost of leaving it all behind.

The past, however, is not easily discarded.

I’d tried. For some years after I left, I was determined to detach completely. I kept my visits to Orthodox neighborhoods to a minimum; stopped watching YouTube videos of singing and dancing Hasidim; stopped visiting the Kave Shtiebel website (literally, the Coffee Room) — an online Yiddish-language forum popular with Hasidim — for a quick check on the goings on and a roundup of gossip from my old world.

Still, much as I tried, my old world would return, often when most unexpected, and Mechel’s phone call was just such an incident.

Mechel would call again some months after his first call, this time to invite me to the upcoming wedding of his son, which would take place in New Square’s main synagogue. “I understand you might feel uncomfortable coming back, but I want you to know that I think of you.”

I told Mechel that the last time I had appeared in the New Square synagogue I was spat upon, and he clucked his tongue.

He sounded genuine, but I didn’t attend the wedding; I was not ready to go back. Mechel, however, kept in touch a while longer. His calls were always brief, and often came before Jewish holidays. Have a good Passover. A happy Rosh Hashana. An inspiring Yom Kippur. Before the Shavuot holiday, he sent a delivery of cheesecake. For Hanukkah, he sent doughnuts, and for Purim, a basket of assorted goodies.

What does he want? I would wonder, though he himself offered few clues. When I tried to draw him into conversation, his responses were evasive, often monosyllabic, as if wary of where our conversation might lead. His gestures were frustratingly touching, kind yet distant. Even more frustrating was that Mechel was keeping me from moving on. His calls would draw out the memories, triggering pangs of nostalgia that left me at once intoxicated and unsettled; I felt not reconnected, but chained.

Memory, however, cannot be erased. A major transition, furthermore, demands not a severing from the past but a greater reckoning with it.

“A rupture creates a fragmented self,” the psychologist and author Dr. Eva Fogelman told me. “There’s the period before, the rupture itself, and the period after.”

Fogelman has written extensively on the effects of collective and individual memory, and, in particular, has worked closely with Holocaust survivors and their descendants. “A person needs to have an integrated self in order to function fully in the present,” she told me. Attempting to repudiate your past, individual or national, is therefore a denial of identity, a refutation of your potentially integrated self, an act of violence to your own consciousness.

Jewish memory and Tevet’s commemorations contain within them this timeless wisdom; integrated selves are created by facing our pasts, never by denying them. Memory, I would come to realize, is not only our history. It might be of the past, but it is in the present. Held up, examined, confronted rather than suppressed, it can sometimes be painful, but it can also illuminate our paths to a more wholesome future.

Mechel, for his part, would eventually stop calling. Maybe his mind drifted to others who’d left. Maybe he didn’t get the result he wanted deep down — perhaps my return to observance. Or maybe he’d made his point; he cared.

Strangely enough, I began to miss his calls. I had come to appreciate them, to embrace the evocation of my past, with all the psychic turbulence that came with it. Not only could I more fully appreciate the choices I made, but I could more fully remember that my past included people like Mechel, who made phone calls and sent cheesecake and doughnuts to near-strangers. That, too, is a past worth remembering.

Shulem Deen’s column appears monthly. He is the author of “All Who Go Do Not Return.”