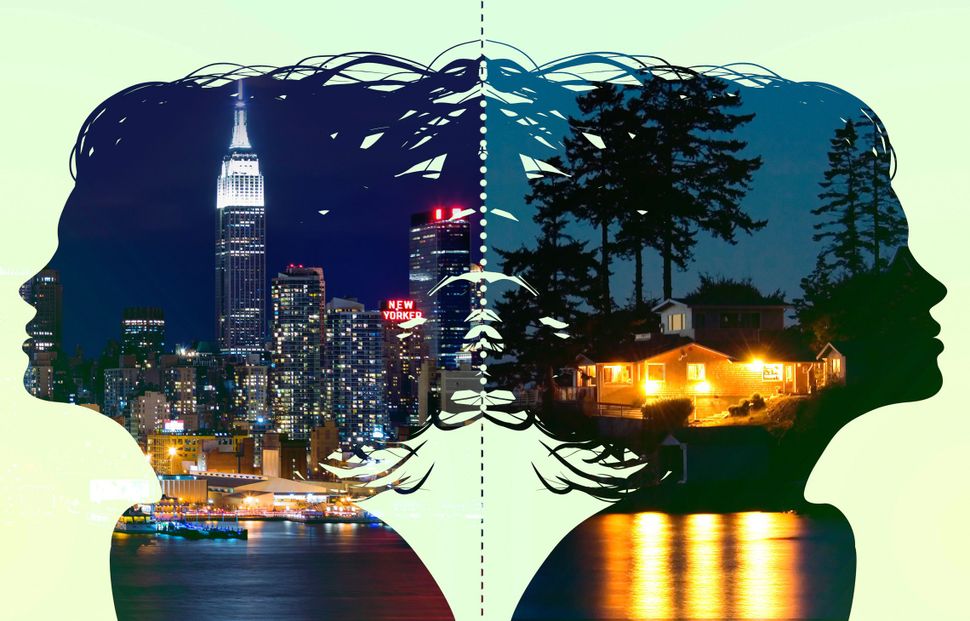 “If it’s what I fear, he may need neurosurgery,” my internist father whispered.

I tried desperately to decipher the squiggles on the M.R.I. scan of my brilliant, robust husband, my hand trembling. He’d taken the test last week, after dizzy spells had left him off-balance. Before he could see a specialist, I’d asked Dad’s opinion during our annual Michigan trip.

“Do you have disability insurance, if he can’t work anymore?” my father asked.

My husband and I had just celebrated our 19th anniversary. We’d recently lost his brother-in-law to a brain tumor. At 54, I was the exact age that his sister was widowed. I’d waited too long to wed; my husband’s health, and our happiness, could already be over. My parents were still together after six decades. In my panic, I was thinking in numbers, tallying everything: years, mistakes. I regretted our too long, tumultuous courtship. Would I only get twenty-two years of love?

As a rebel who’d escaped to Manhattan, I didn’t think I’d ever marry. Especially at 32, after I’d had my heart slaughtered. I wasn’t anywhere near over it when a relative said, “You have to meet Charles.” A staid Midwest Jewish doctor visiting the Big Apple was not my type. But after hours strolling the San Gennaro festival in Little Italy, eating zeppole and playing carnival games, I was surprised he spoke three languages and quoted Milan Kundera. He was funny and warm. Could I be smitten with Dad’s suburban colleague?

Keeping in touch long distance for months, I asked Charles to escort me to my high school pal’s hometown wedding. My parents were coming too; we’d never double-dated before.

“What are you wearing tonight?” Mom asked, driving me home from Detroit Metro airport.

“My black dress with the eyelet sleeves.”

“Not that old shmatte?” She cut across the highway. “You need a new dress.”

“I haven’t slept with him yet,” I confided.

“Buying his widowed mom a house and moving in because she’s afraid to be alone shows he’s a great son,” she argued. “Dad thinks he’s a top-notch neurosurgeon.”

“Dad said he’d pay him to marry me.” I didn’t divulge that I was meeting Charles’s mother at his 36th birthday party Sunday, afraid my mother would send The Jewish News an engagement announcement.

After sharing three lovely dinners in New York, Charles asked if I’d ever move home. I couldn’t imagine being so far from the off-and-on boyfriend – a struggling scriptwriter I’d just given up on after four years. Twenty blocks from my Greenwich Village apartment, he wouldn’t even commit to living in sin. Although he was a big, burly six foot four, just my type (I couldn’t fall for man who had smaller thighs than I did), I’d walked away. Still, I remained wounded. My mother had moved to the Midwest for my father. Should love dictate your location? At the Michigan Neiman Marcus, a saleswoman pointed to my gold heart pendant. “This is nice.” “Used to wear it on my sleeve, now I wear it around my neck,” I joked.

“Size eight. Has to be noir,” I added. In the dressing room, I slipped a mini-frock over my head which got tangled between my shoulders, hair, and elbow.

Mom marched me through Ann Taylor, Lord & Taylor and Saks in a frenzy of sequins, feathers and taffeta. When she offered to pay for a tight Armani that could cover three months of my rent, I realized she was searching for the dress to bring Charles to his knee.

Alas they all were tight and constricting. I couldn’t fake it. Since none felt like me, I decided to be myself in my eyelet sleeves. We drove home in silence.

That night at 8, Dad greeted Charles. They cursed the price of malpractice insurance in his den while Mom applied Russian Rose lipstick to my lips, sprucing up my dress with her diamond necklace. (I preferred my gold heart, which I’d misplaced.)

Downstairs, Dad showed Charles an antique anatomy text. They were the same height, matching tuxedos, thick dark hair, my dad’s graying. They could have been father and son.

“Let’s take separate cars,” I told my parents, nervous to revisit my old temple, the only unmarried girl from our crowd. Although I’d heard my scriptwriter had reunited with his ex-girlfriend, I hadn’t touched another guy in six months. I pictured getting a hotel room with Charles later.

At the temple, the Rabbi’s wife said, “The big shot New Yorker. This must be your husband.”

“Wouldn’t be terrible, would it?” Charles teased, winking.

Guzzling Champagne, I was stunned to think: maybe it wouldn’t.

Mom rushed up. “You won’t believe it! When the groom’s father was in the hospital, guess who saved him? Charles!”

It was a conspiracy. Dancing to Stevie Wonder’s For Once In My Life, as Charles rubbed my back, I was swept up. He sashayed us near my parents, who grinned. Tipsy, I loved eliciting their delight, albeit only for my suave blue-ribbon Jewish wedding date. When they left, Charles insisted we stay, bunny hopping with the Rabbi and his wife, Macarena-ing with bride and groom. I’d dropped out of this town after flunking suburbia. If I couldn’t find love or work in Manhattan, could I re-enroll? What was so great about Gotham anyway? I was broke, exhausted by rejections from editors and the man I loved. With millions of people crowded into tiny apartments, I was still lonely.

“I feel like the prom queen.” I hiccupped, drunk.

“Then I’m the king,” he said. “Hold your breath, count to ten.” It could be fun, having an in-house doc, like Mom had; we could grow old right around the corner from my parents.

Leaving, Charles gathered cookies and brownies from the dessert table in two napkins in his pocket. “For my mother and your parents.” How sweet!

Driving back to my folks’ West Bloomfield house in his Mercedes, I was about to suggest a detour to the nearby Hilton when he said, “So tomorrow you’ll meet my mom, Uncle and Leah. She’s flying in too.”

She was in her twenties? “Leah’s not related?” Why would she fly in for his birthday? I was plastered, confused. “She’s your date?”

“Sort of. Mom told her about the party. Leah surprised me.”

“You’re DATING her?” I hiccuped again, shattered. At the door, he gave me a quick peck.

What an idiot I was, misreading everything. We were buddies. He was only flirting.

“Best wedding ever. See you tomorrow at twelve,” he said, handing me the crumbled cakes.

I waved goodbye wistfully as his car pulled away. Inside the house, everyone asleep, I ate his stolen sweets. In my pink childhood bathroom, I threw up all the bubbly, dessert and little hot dogs. Then I booked an early flight home Sunday, leaving my parents a note.

Back in my Manhattan apartment by noon, I felt ashamed, double dumped, spurned by a suitor I wasn’t even seeing. I returned the insufficient eyelets to my closet. I was fine on my own. So why couldn’t I stop crying? Noticing my answering machine flash, I imagined Charles asking why I’d missed his party.

“Hi, honey,” my mother’s voice said instead. “The salesgirl found your heart at Neiman Marcus. You left it in the dressing room. I’ll mail it back to you.”

The next message was from my scriptwriter ex. “Hi, it’s Charlie. Just wanted to say hi. Hi. I missed you. I mean, I miss you.” He stumbled awkwardly, re-melting me.
So odd they had the same name.

Standing under the chuppah with my scriptwriter at 35, I wore a different plain black dress in Soho and West Bloomfield, to my parents’ joy. Turned out, they didn’t care about a guy’s geography or profession, just my happiness.

It felt secure until two decades later, when I couldn’t breathe as Dad fretted over my mate’s brain images, saying, “He might need a shunt.”

Vaguely recalling that word, I Googled my former Charles: His expertise was “shunt insertions” for “cerebrospinal fluid,” coincidentally my husband’s exact ailment.

I phoned him, two blocks away. He drove over. He and Dad caught up on medical gossip, then he read my Charlie’s scans. He had him walk a straight line, then walk sideways. Nervously listening to their hour-long neurology talk, I noted Dr. Charles had aged well, just thicker glasses, grayer hair. My handsome Charlie, also bespectacled and graying, was two inches taller, with longer hair.

“The men in my family either lose their hair or their marbles,” my Charlie said. Dr. Charles’ opinion: marbles intact, no cancer, no surgery. Just mild hydrocephalus, fluid on the brain, to be monitored by a Manhattan specialist. Charlie exhaled in relief; I swallowed back tears.

The next day we brought a thank-you gift to Dr. Charles’ house that was overstuffed with his three kids’ toys, videos, clothes. His wife (not Leah – another slim, younger beauty) was putting their daughter to bed. His sprawling quad level on the lake, like my parents’ home, was the opposite of our sleek New York high rise, filled with books I’d published and DVDs of Charlie’s TV shows. The doc showed off his vast backyard where, he said, his whole family camped out in the summer. He cursed raccoons, deer and insects who’d munched his home-grown veggies. “Here’s some tomatoes for your folks.”

More comfortable amid taxis and skyscrapers, I would have never fit in here. Someone once commented that my husband was the least likely person to ever make me sleep in a tent.

As my neurosurgeon friend walked us home, I was grateful he’d taken care of my spouse and crushed my heart at the wedding twenty-two years before. Time had transformed my humiliating memory into a sweet rescue. Strolling between the two that day, I’d won the best of both Charles.

Susan Shapiro’s new novel “What’s Never Said” is set in the ‘80s in New York and Tel Aviv. Follow her on Twitter @susanshapironet