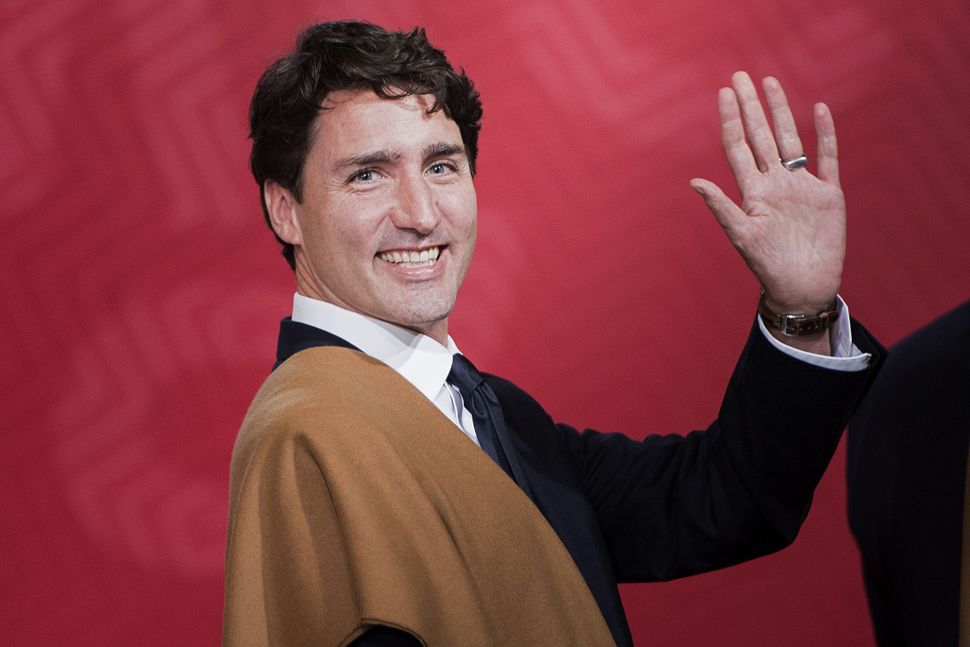 Justin Trudeau is two things at once: a real Canadian politician and a dreamboat.* Americans, at least according to the Canadians I know (and I think they’re right about this) are familiar mainly with the dreamboat qualities. Qualities including: a) he is very beautiful, and b) he is not Donald Trump. A Canadian Liberal politician may not be as far left as things go in Canada, if that’s your preferred barometer, but for the US, he’s like some sort of fantasy Democrat, as well as really good-looking. His flaws are, from that vantage point, easily forgotten.

Anyway, the Canadian prime minister arrived in DC this morning to meet with the relevant Trumps, Donald and Ivanka. Donald, fine, they’re neighboring world leaders. Sure, the Trudeau of my dreams wouldn’t give him the time of day, but I get it. Why Ivanka? Is it because they sell her brand in Toronto? No, or not exactly: According to the Associated Press, there’s going to be “a round table discussion about women in the workforce.” Because Ivanka, symbolically if not directly, there will soon be “a task force called the United States Canada Council for the Advancement of Women Business Leaders-Female Entrepreneurs.” According to an unnamed White House official quoted in the piece, seems “Ivanka Trump was involved in recruiting participants and setting the agenda for the meeting and will attend.”

Do we credit Ivanka, then, for the attention being given, however tepidly, to women’s concerns? Or might it just have something to do with women worldwide marching in opposition to the new US administration?

*I mean, how many politicians get put on multiple dreamboat sweatshirts?

Do you prefer Justin Trudeau riding a moose or horse? https://t.co/qnHTX9ElHB pic.twitter.com/MbZXcZ9BHg