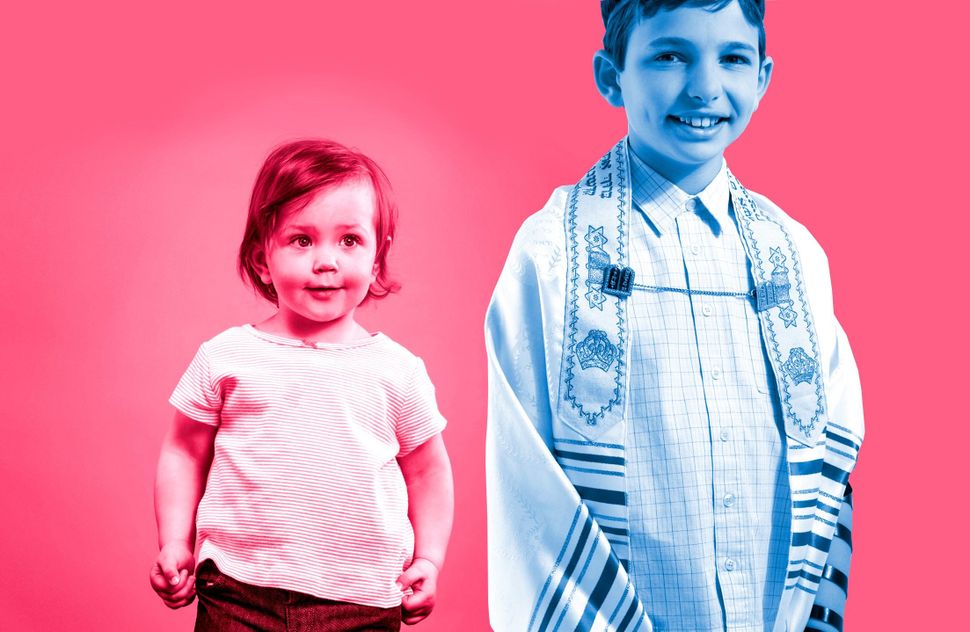 The day that I never thought would come, never imagined would be a milestone for me or my daughter, is here. I am buying my daughter her first tallit.

I’m not sure why this feels so groundbreaking to me. She’s two – to her, the tallit is just a toy. Her 4-year-old brother found his great-uncle’s old tallit in a pile of my grandmother’s long-abandoned miscellany, which is when this fixation began. Who could have predicted that my son would fall in love with that turquoise, plush velvet, stained tallit bag and the tattered rust-colored tallit folded inside?

But there were more surprises. Not only had my son chosen to indiscriminately pray and convene an imaginary minyan daily for extended periods of time (while chanting loudly), but my daughter had taken to the ritual as well. Now, to be fair, Leela is only copying her brother. And to be even fairer, my son is only mimicking his father. My son’s love for his tallit does not come from true religious zeal, any more than my daughter’s desire for her own prayer shawl comes from a need to imitate her older brother’s every move. Even in our Modern Orthodox community, where women do not traditionally wear a kippah or tallit, there would be little controversy in a little girl playing dress up. It wasn’t strange to let her wear kippot around the house when she was trying to magically transform herself into her big brother, so why is the step of buying her a tallit so daunting?

The difficulty in finding a tallit has not helped. The Internet charges either $100 or more for a new bar mitzvah tallit, or $30 for a beautiful pink one that has Christian prayers on it. I even tried calling the local Judaica store in case it was me and not the Internet that was holding my daughter back from her single-minded pursuit. Alas, even the Judaica store had not anticipated what must be a large market for play prayer shawls. Someone had thought of wooden block tefillin for children, but the toy tallitot they manufactured would sooner fit an American Doll than a 3-year-old girl. My daughter had no interest in this smaller, clearly disingenuous version of what she saw as the real thing.

I was ready to throw in the towel. She was not.

If I am going to be honest, I’m not excited about her having a tallit. But I should be. As a feminist and Jewish feminist at that, I should be proud that at such an early age my daughter is not seeing the world through gendered eyes. She should enjoy a time in her life where she can put on any article of clothing and can transform herself into any animal, superhero or object she desires.

So why do I want to end the search? I realize that I am worried about the choices I have made and the doors they have opened or closed for my daughter. I choose to raise her in the Modern Orthodox world, knowing full well that this community does see the world through gendered lenses. Only men must wear tefillin, participate in a minyan, wear tallitot. Women light the Shabbat candles, take care of family purity laws and separation of challah, unconstrained by other time bound mitzvot (laws). I do not believe the categories of gender are a problem, or that men and women need to be the same and have the same roles. Still, I’ve been surprised that as I get older, instead of feeling that there is more gender equality in the world, I feel there is less.

The Orthodox Union is pushing back against having female rabbinic leaders in synagogues, many women still struggle to obtain a get (a Jewish ritual divorce) and new synagogues are being built with ever higher mechitzot (barriers between the men and women’s section).

A part of me is grateful that as a young girl I didn’t want to don my father’s tallit, kippa or tefillin. I think that would have been very hard for me. As an adult there are things I want that I can’t have as a woman. Maybe watching my daughter want to wear a tallit is hard because it makes me think about the opportunities that she is going to want as an Orthodox woman, but not be able to have.

I grew up in the Modern Orthodox world and believe in its ideology and institutions. Yet, wearing a tallit is part of a series of rituals that are seen as non-normative for women. So I will buy Leela a tallit, but with the knowledge that I might have to coax her to become less interested in it over time, because it is not something that would be easily accepted in Modern Orthodox institutions or schools. There has been a debate about whether to let girls wear tefillin in Orthodox high schools and there is only one school I currently know of that does not ban the practice.

I love being a woman and I feel truly blessed to have a daughter. I believe in the Modern Orthodox Jewish community and that it is doing so much in terms of grappling with finding places for all our traditions and halachot (Jewish law) in the twenty-first century. However, there is reason for concern. If the community does not change its power structures and find more ways to involve women in leadership roles, will my daughter want to be a part of it as she gets older?

While I watch my son and daughter jointly playing shul for hours every day, shuffling with their kippot and tallitot, praying with fervor that only a toddler holding a siddur (prayer book) upside-down can muster, I wonder: If the community does not change its power structures, will I even want to be part of it as I get older?