How A Christian School Helped My Son Find His Judaism 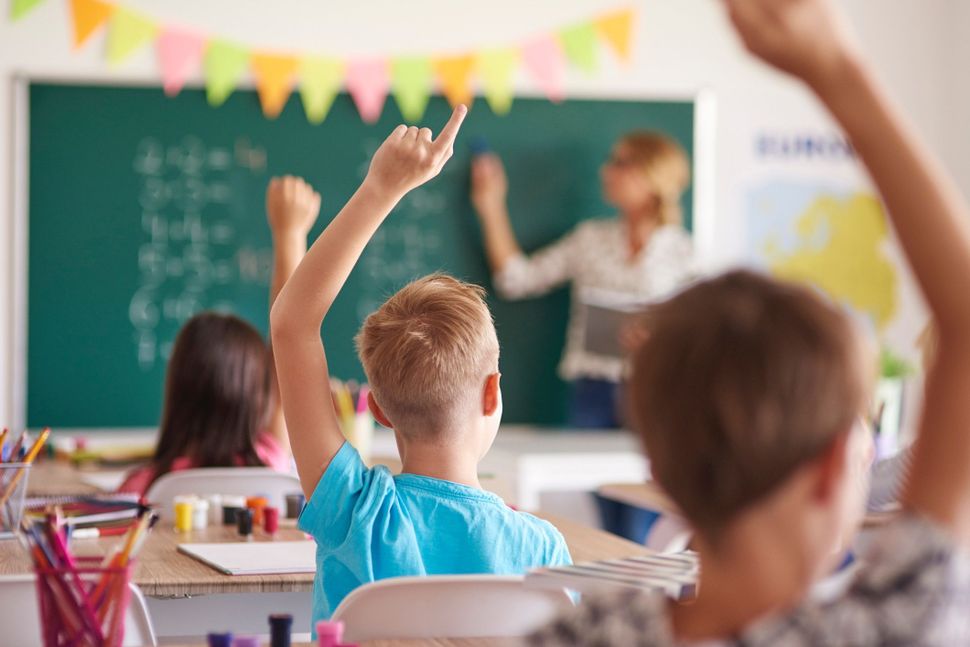 When we find out that the local primary school to which we are about to send our son is affiliated with a Christian Methodist church, we begin to worry what it will do to our child’s malnourished Jewish identity.

The school has a friendly atmosphere, claims to be tolerant of all religions and views, and aims to raise kind, liberal and open-minded children.

But still, the Christian aspect is inevitably there: in the daily worship and the weekly assembly in church, the reciting of prayers, the Nativity play every December.

We are concerned. Since we don’t observe traditions at home with any regularity, if the only religious input he gets is from school, how is he even going to know that he is Jewish? Is his singing about baby Jesus during our frantic last-minute lighting of Hanukkah candles an early act of defiance, or an earnest attempt to contribute to the festivities, and not understanding that the two don’t go together?

I have been procrastinating, for years, on defining the Jewish aspect of myself and my family life. As an Israeli of Russian descent, and having lived in North America for years before coming to the UK, my Jewish identity is rather complicated.

But the push to find a definition finally comes from the very child who we worried would forget his own Jewishness in a Christian school.

Ironically, it was this very environment which nurtured our son’s Jewish identity more than we ever imagined.

It turns out that our son is a contrarian. He wants to stand out, not blend in. He is the one who now starts family conversations about Judaism and faith, pushing me to define and refine my own beliefs.

“What do Jews believe in?”

Here I run into problems. I don’t consider myself an atheist but I realize that my belief in God at this point is too vague and internal, and its connection with outside rituals and traditions is not obvious to me. I worry that I’m only confusing him with this talk. But he persists:

“Who is right, Jews or Christians?”

“There is no right or wrong, that’s just a matter of belief and traditions.”

“In the Church assembly today I didn’t say ‘amen’, because I didn’t agree when they mentioned Jesus. But who is right?”

“I don’t know, that’s not the right question to ask.”

Like an exile seeking remnants of home, he keeps looking for ways to actively assert his Jewishness.

Frustrated with the lack of clear answers to his theological explorations, one day at school instead of annotating a prayer, he simply writes “Jews are right” in his religious education class workbook. The teacher deems this act aggressive enough to call me in for a “talk”.

In December, he begs me to make sufganiyot and bring them to the school’s Christmas fair.

In April, at his request, I go to his class and tell children all about Passover.

And during our annual trip to Israel, more questions ensue.

I explain that there are different ways to be Jewish depending on what you believe in. That the people in black coats believe that Jews have to follow very strict rules, like not watching TV on Saturdays and waiting three or six hours after eating a chicken nugget before they can have ice-cream. I choose these examples strategically, of course, to highlight our advantageous position as secular Jews (see — we are Jews too but we can watch TV on a Saturday while dipping our chicken nuggets in a bowl of ice-cream! How lucky for us!)

But the effect is exactly the opposite.

“Mama, I want to have a lot of rules too!” he whispers to me in awe.

Apparently inspired by the sight of the people in black coats, he later asks us to buy him a kippah. He had seen his dad wear his on Yom Kippur, the only day of the year he wears it. But we’re in Israel, and suddenly I feel that having him wear a kippah on a daily basis is not such a great idea considering we’re secular. But we buy him a kippah in any case — he chooses a dark red one with geometrical patterns — and make it clear that it’s for special occasions only.

I still don’t know what and how we want to observe. I still don’t know what I believe in or what I want to pass on to my kids. Joining a synagogue doesn’t feel right, having been a secular Israeli for many years. But if there were one in our vicinity, we’d probably go there occasionally. How to maintain our sense of identity and belonging while outside of our home country? How to feel Jewish without feeling too Jewish?

And while I’m searching for answers as a parent, my son continues on his own quest in his Christian school.

One day, he comes home with a craft project. In religious education class that day, the children learned about Judaism and made handmade paper mezuzahs. The teacher had explained to the children what a mezuzah is, and asked them to write something on their mezuzahs that they think Jews believe in. I squint at the little rectangle of paper. And in my six-year-old’s cursive writing, a message to the school’s Christian God, yet also a perfect description of our family’s confused Judaism:

Tanya Mozias Slavin is a writer and linguist who has lived in Russia, Israel, US, Canada, and now lives in the UK. Find her at www.tanyaslavin.com or follow her on Twitter @tanya_slavin or on Facebook.

How A Christian School Helped My Son Find His Judaism