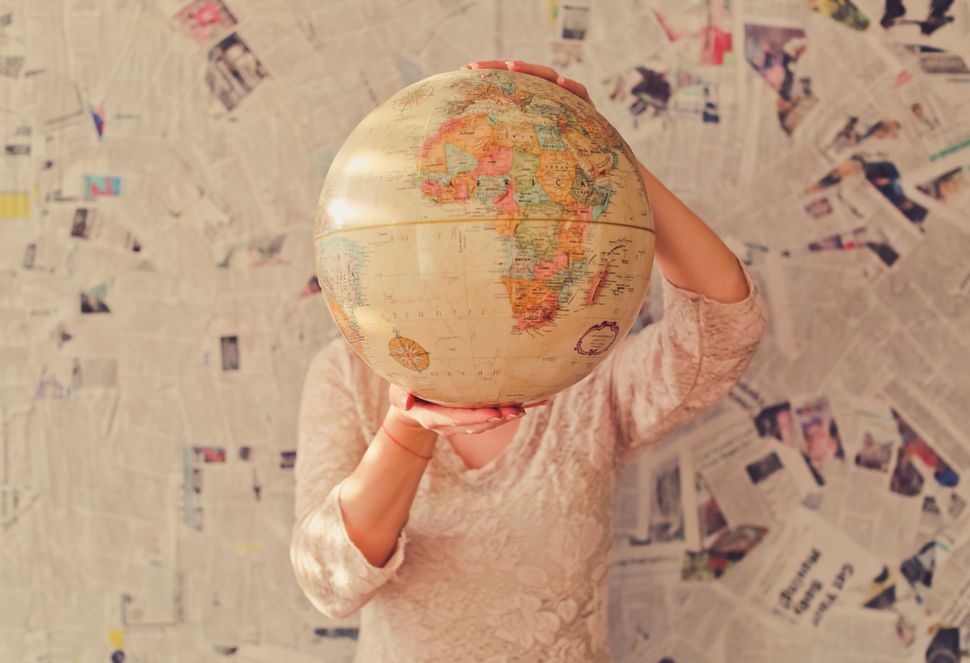 Two things happened to me in first grade. Number one: I was minding my own seven-year-old business when a girl spit at me during recess. Number two, which took place right after that: my parents yanked me out of public school.

It was 1968 and I’d recently been yanked from my home in Buenos Aires, Argentina, where I was born, to the United States. By then my mother and father were well versed at dragging me and my siblings around from one country to another. In 1962, when I was just one and had no say in the matter, my parents and their friends, a restless clan, had orchestrated a mass exodus from Argentina to the Promised Land.

Logic would follow that our group of urban Spanish Jews would settle in a thriving metropolis like Tel Aviv or Jerusalem. But no: We ended up in a commune — a cooperative farming complex called a “moshav” — in a remote section of northern Israel. There we literally lived in wooden shacks and as they say, worked the land. It’s where I learned to walk and talk. But by the time I had turned four, the romance of Zionism for the adults gave way to agricultural reality: calloused hands and aching backs. And Israeli poverty, it turned out, was no better than Argentinean poverty. 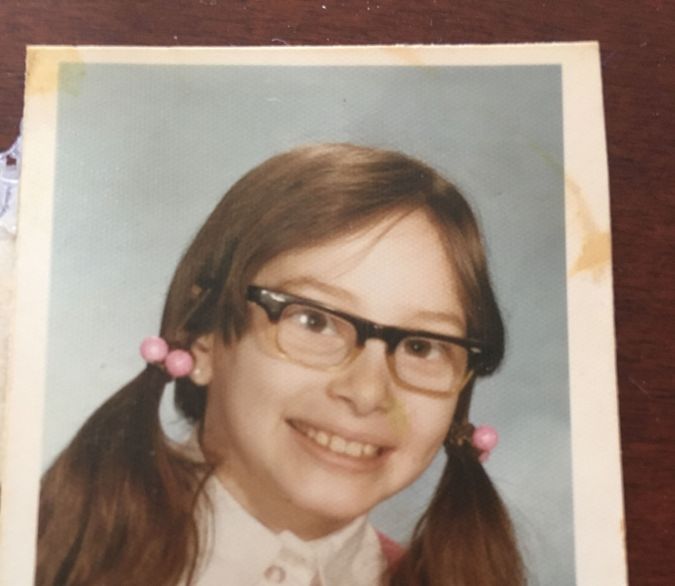 So we all packed up and retreated back to Buenos Aires, where the grownups swiftly put into place a new and improved migration plan: USA. That my siblings and I didn’t speak a word of English was not even a consideration. And no sooner did we pick up our luggage at JFK International Airport than we all found ourselves planted in public school classrooms, where I was flag-shamed on my very first day of school in America because I didn’t know how to say the Pledge of Allegiance.

I didn’t understand the teacher’s words as she stopped the class when they began reciting, but I got the harsh tone as she angrily pointed to me to rise up in pretend patriotism and place my hand to my heart like the other kids.

The humiliation didn’t stop there. We didn’t know from pilgrims, Betsy Ross, the Revolutionary War. No one had primed us on the meaning of turkey in the month of November or the importance of reindeer in December.

I remember one day being handed pink and red construction paper and scissors. What now?? I wondered, as all the children launched into a frenzy of heart-shaped cutouts. At that point, I was doing my best to assimilate by just going along with whatever activity was happening at school each day. But blending in isn’t easy when you carry homemade empanadas in your Peanuts lunch box.

The youngest of my three siblings, I was the weakest link. Habitually silent and frightened by everything pre- and post-America, I was a skeletal child in oversized hand-me-downs. I had uneven gaps between my teeth, bad posture and sported gigantic Woody Allen glasses. Taking a cue from my hostile teacher, I could hardly blame the little blonde-haired bully for spitting on my left lens.

But for reasons beyond my understanding, I was the one who was punished for the crime — I was banished by my parents from P.S. 69, and enrolled into full-time Hebrew school. An Orthodox one, at that.

Still struggling with English, I was now expected to master an ancient language as well. Where I once worked up a substantial sweat trying to comprehend the difference between an adjective and a noun, at yeshiva, every day began with an hour of prayers, followed by reading, writing and religious classes, all conducted in Hebrew.

In this conservative school, strict adherence to Jewish laws and customs was mandated. Girls were not allowed to wear pants. We were restricted to dairy lunches, but before we could take one bite of our egg salad sandwiches, prayers had to be recited—in Hebrew, of course. And we were all expected to be somber and reflective after hours upon hours of hearing who God had smitten that day and why. Afternoons were reserved for the general American curriculum — more or less as an afterthought.

It was a given that the belief systems and practices at Hebrew school were supposed to spill over to our private lives. But at home, we were merely cultural Jews. Not even. Observing the holidays for us simply meant massive meals with other Argentinean families. We never attended temple services. We spoke Spanish and ate pork for dinner. My mother told me it was kosher. I believed her.

During those early years here, my parents, fatigued factory workers, were contending with struggles of their own. To pay for my tuition, my mother had somehow, in broken English and Yiddish, negotiated helping out at the school during her few off-hours. Adding to the daily exhaustion: dealing with three teenage children suddenly vying for the adolescent liberties inherent to our strange new land.

As parents in South America, they had full authority over their kids. Here, my older siblings quickly discovered, rules were made to be broken. So I quietly bore witness to their clashes, happy to keep myself obscure within a fantasy world about American girls. Every Saturday after household chores I was rewarded with a visit to the local library. I’d go back home balancing piles of books in my twiggy arms, and then devour stories about American girl detectives; about American girls who were pretty and popular and in puberty; about American girls and their boyfriends, their cars…their golden locks.

It was under the influence of the borrowed library books that I finally became fluent in the English language. That and Muriel Stahl.

Mrs. Stahl was my fourth-grade teacher. She wasn’t warm and fuzzy or nurturing in any way. In fact, she was a stern disciplinarian, one with high expectations. Despite our mornings of rigorous Talmudic study, in her afternoon classroom she demanded excellence. So everyone went out of their way to please her, competing for praise after surprise quizzes in grammar, spelling and vocabulary. As for me, perpetually overshadowed academically by the natives, I was content to skirt by.

Then one day, when our class had finished reading William Armstrong’s “Sounder” — the story of an impoverished black sharecropper family from the Deep South — we were given an unusual assignment: to write an essay about a poster Mrs. Stahl had put up on the wall. It was an image of a black child, sitting alone by railroad tracks. He had an air of despair and solitude that I well recognized.

The following afternoon, one by one, Mrs. Stahl returned our essays. Prepared for the usual insipid checkmark my schoolwork generated, I stared blankly at my paper. At the top of the page, in large red script, Mrs. Stahl had carefully scrawled:

“You have a talent for writing.”

I had … something special? What a revelation! Suddenly, scrawny, fearful, anxious little me felt a glimmer of promise.

If only every foreign child who feels insignificant and scared could receive such a gift.

I kept that piece of paper among my most cherished possessions, even after leaving yeshiva for public school when I became a teen, and then in college where I majored in English Lit. 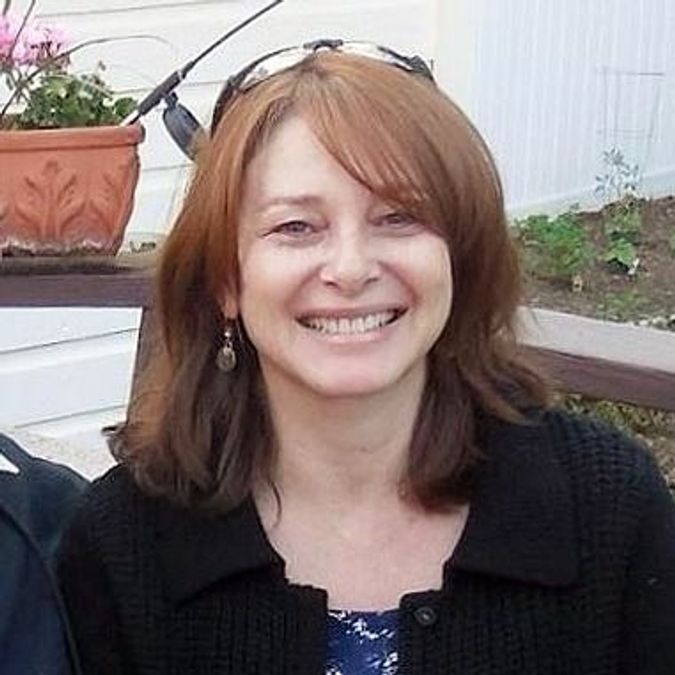 I still have it, decades later, after I’ve had children of my own and my words have been published in newspapers, magazines and in a few books. It takes me back 50 years, when my middle-aged parents left everything familiar to bring me and my siblings here. It recalls my mother’s tiresome sacrifice so I’d be educated in a sheltering space, one which initiated me to a strong Jewish foundation.

Today, as America spits on immigrants, it reminds me of that little blonde haired-bully, who didn’t know any better than to reflect what she was learning from adults about welcoming strangers.

Claudia Gryvatz Copquin is a New York-based freelance writer, author and the founder of Word Up: Long Island LitFest