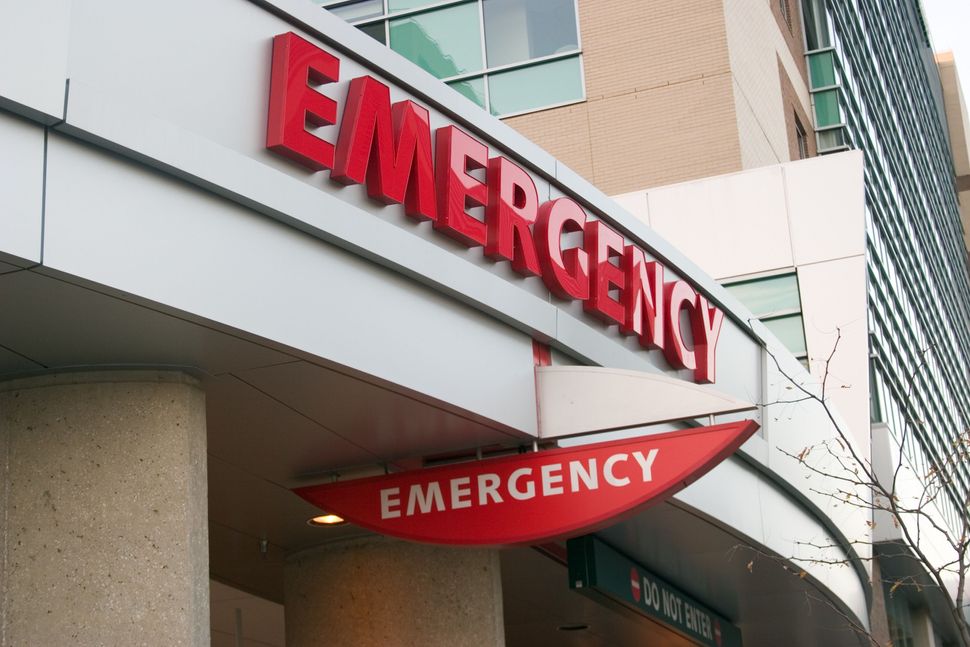 My dad always says that his most valuable possession is his relationships. Human-to-human connections make life worth living. Shared experiences with friends and family bring meaning into our lives, and even a chance encounter with a stranger can be incredibly fulfilling.

This past weekend, my husband, Ira, a plastic surgery resident at NYU Langone Hospital, was on call. After spending most of Shabbat alone with my two young daughters, I decided to take a long walk with the double stroller to the hospital. Before he left, Ira mentioned that he would be quickly checking on a few patients, and then we could walk home together.

Winter Shabbats with toddlers cooped up in an apartment are challenging, so I welcomed the adventure. We bundled up and headed out for the 40-block walk. Halfway there, we got caught in a windy snowfall. My girls were crying, and I was kicking myself for thinking this walk was a good idea, but we were already halfway, and I hoped the snow would subside in time for our walk home.

My daughters love this room, because it offers every snack imaginable. But this room is also used by men as a makeshift synagogue. I walked in and discovered several Hasidic men in shtreimels, about to start the afternoon prayers. Because religious Jewish men don’t pray in the presence of women, I left the room while the men helped my daughters locate the chocolate wafers and potato chips.

I went out into the hallway to wait for the girls, and saw a Hasidic woman standing by herself. Her name was Chaya, and she was waiting for her husband who was praying with the other men. Even though we were the only two people in the hall, I didn’t speak to her. Whenever I see Hasidic Jews, I assume they do not want to talk to me, because I am not a part of their world. I thought she would be judgemental of my Jewish observance: It was Shabbat, and I was wearing sweatpants and sneakers.

However, she struck up a conversation with me about the girls. She was very friendly, and I immediately felt like a jerk for falsely stereotyping her.

She came over to sit with the girls and me while I waited for Ira and she waited for her husband. We chatted for a while and made small talk — I avoided asking why she was at the hospital, because I did not want to pry.

But then she mentioned that I seemed very stressed. I opened up to her: I told her about Ira’s work schedule, and how I had been alone all of Shabbat, and how the girls were fussing, and that I was about to hit my breaking point.

Chaya was sympathetic: She was also a mom and could completely relate to how I was feeling. She encouraged me to take time for myself as soon as I could. At this point, I felt comfortable enough to ask her why she was at the hospital.

Chaya told me she had just had a baby girl on Tuesday. The baby was born with a heart condition, and the doctors were also concerned she likely had Down syndrome. Chaya was shocked: Down syndrome is rare in children born to young mothers. She is only 27 years old and had three healthy babies prior to this.

Before Shabbat, Chaya left her baby in the NICU to go home to her husband and three sons. But then, on Shabbat, she received an emergency knock on her door from a hospital liaison who told her that her baby was about to undergo emergency intestine surgery. She and her husband left her sons with a family member and rushed to the hospital. I met her only a couple of hours after the surgery.

I was blown away by her strength. She faced the worst nightmare a mother can have — a sick child she was powerless to help. And yet, she seemed so at peace.

I was amazed at her ability to counsel me about my petty complaints when she was suffering such a heavy blow. Chaya explained that this situation was out of her control — she had no choice but to surrender. She said she did not understand how people encountered problems of this magnitude without faith in a higher power. Her stability came from her emunah (or, faith) that Hashem (God) was watching over her baby girl.

Just then, her husband, in his shtreimel and bekishe, emerged from the bikur cholim room with a small bottle of grape juice to make kiddush, since they had missed their Shabbat day meal. As they spoke in Yiddish, I was reminded how little I had in common with this woman on the surface. During our conversation, I had completely forgotten what different worlds we came from. When we were speaking, our differences melted away — we were just two moms talking about our children.

Ira never showed up, because he had a problem with one of his patients. After Shabbat ended, he called an Uber for the girls and me to go home while he stayed to operate. Normally, I would have wallowed in my pity party — I would have been annoyed that we schlepped all the way down to the hospital, while Ira was nowhere to be found. I would have been frustrated that it started pouring rain as we waited outside for the car to take us home (I could not go back inside to wait, because I had no phone and I couldn’t reach Ira to ask which car was ours). I would have been furious with the girls misbehaving and fighting. But this time, I wasn’t in the mood to wallow or be angry: Instead of feeling sorry for myself, I was overcome with emotion from this chance encounter with my new Hasidic friend.

Our hour together changed my life. She taught me three critical lessons:

1) Snap judgments are not accurate. I falsely stereotyped this woman based solely on her appearance. How many times do we miss out on seeing someone for who he or she really is? It is important to unlearn surface-based assumptions about people.

2) Human-to-human connections are irreplaceable. Normally, when I find myself in situations with strangers, I stare at my phone and avoid engaging. I wonder if people used to talk to each other on the subway, in elevators and in waiting rooms before cell phones. Because it was Shabbat, I had no phone and no chance to avoid conversation with this woman. How many life-changing encounters am I missing out on the rest of the week when I am busy scrolling through social media? We need to put our phones down more often and interact with actual people.

3) Emunah creates strength. I have a tendency to both worry and wallow over things I cannot control. Chaya taught me to surrender and have faith that Hashem only gives me challenges I can handle. The magnitude of her unfortunate situation is so much greater than any of my problems, but her faith-filled approach gives her a positive outlook and the resilience to push through.

I once heard a quote that has stuck with me: “There’s a king in every court.” So once in a while, let’s remember to find the kings in the courts among us – let’s lose the headphones and ask the person in the airplane seat beside us how her day is going. Let’s look up from the iPhone and cheerfully greet the person in line behind us at Starbucks. Let’s smile and make small talk with the man waiting to cross the street. Brief, unexpected visits with strangers can be as fulfilling and enriching as any deep conversation with a trusted friend.

I will never forget my encounter with the new mother at the hospital. I can only hope that I make the next stranger I meet feel as strongly connected with the human soul, as Chaya made me feel on a Shabbat afternoon outside a bikur cholim room.

Elizabeth Savetsky is an NYC-based wife, mother, and accessories blogger who defines her style by incorporating over-the-top pieces into everyday life. Through her blog, ExcessoriesExpert.com, and social media channels, her mission is to make accessorizing accessible to every woman and encourage mamas everywhere to embrace their inner glamour girls.