How I Got Enslaved By A Holiday Of Freedom 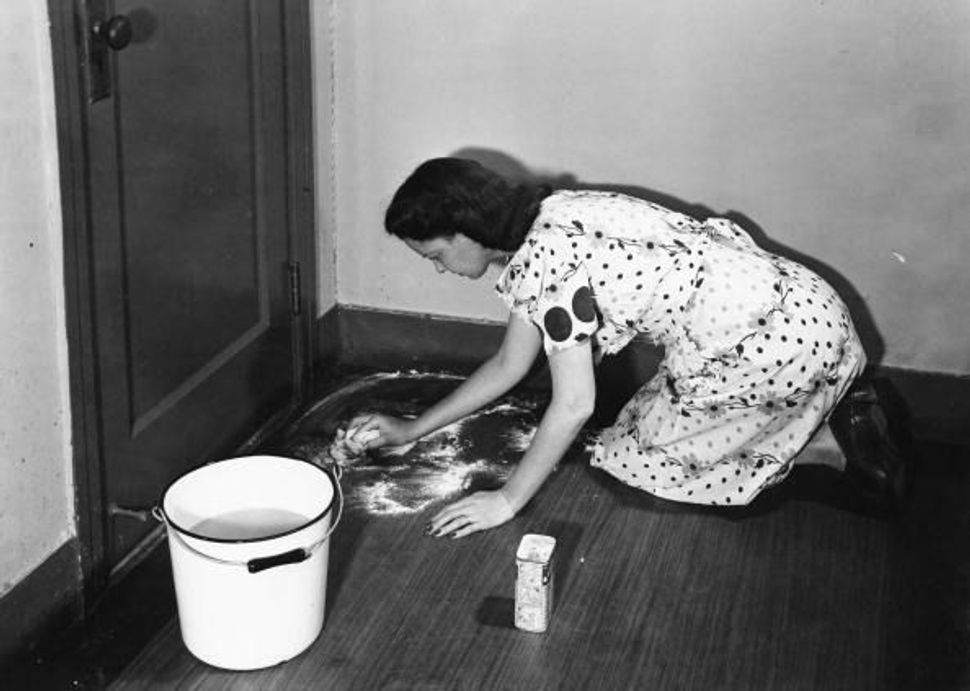 The holiday of Pesach is a dance, the ritual choreography of the Jewish people reenacting their flight from bondage in ancient Egypt.

But for those of us who bear the burden of the holiday preparations, it often feels like we’re dancing in the wrong direction.

It is spring here when we tell our slavery-to-freedom story around the seder table, a tale of God’s awe-inspiring special effects, of His signs and wonders and the splitting of the sea. Other miracles await us now, too – the earth comes to life again, stretching its limbs after the long months of a cold winter.

Yet too many Passovers, I was far too distracted to savor any of the miracles of the season. I let the smell of Fantastik overpower the scent of the hyacinths. Rather than stretching my limbs outdoors, I squeezed inside the refrigerator to reach the schmutz lodged in the divots behind the vegetable drawer. I emptied and restocked cabinets that would be tied shut for the holiday anyway, unfolded and refolded the linens, and took a toothpick to the base molding in the kitchen.

Who had time to think about our exodus to freedom?

What might appear as obsessive-compulsive under other circumstances, we justify in the name of the holiday. We traditional Jews like to one-up one another in our holiday preparations, and clean far more than prescribed, wearing ourselves to the bone. Even when we know we are no longer looking for chametz and are in the realm of sterilizing an operating room — we keep going.

Meanwhile, I would laugh at the cautionary videos and memes of women going to absurd lengths to clean for Pesach or standing behind the prison bars of holiday prep. I watched and shrugged — not realizing that’s who I was on the verge of becoming.

I continued to plod away at my own intense pace. I would stay up too late (or all night) and crawl into work the next morning, surviving on a bottomless cup of coffee. I became cranky and snapped at my family for not helping enough. And every year, when Pesach arrived, I was too physically and mentally drained to enjoy a holiday I adored.

I had gone way past the symbolism of remembering that we, too, had once been slaves in Egypt. Instead, I had become a slave to the holiday itself.

Still, it never occurred to me change anything. Year after year, I spent two weeks absorbed in preparations for as many hours as I could stretch out the day.

But one year, when I collapsed onto the couch with a migraine so serious that I was unable to sit at the Seder table at all — I realized I had been missing the point the entire time.

It dawned on me that something had to change. While I continue to empty each cabinet, air the mattresses, and sweep my way through the garage, I embrace the fact that the process is ultimately about humility — and not about the amount of cleaning products I use. It’s about letting go of the chametz that bloats our pride and drives our quest for perfection, which remains elusive even if we turn our houses upside down. It has nothing to do with the imaginary crumbs that might live in the branches of my dining room chandelier.

Over the years, I have begun to to say enough is enough. I’ve learned to plan better. I start earlier, taking baby steps instead of long jumps. I have simplified my menu, and developed an affection for disposable pans. And I never stay up all night.

Only this way have I broken free from the yoke of enslavement to the holiday. I have finally discovered how to to breathe, reminding myself that though we have been tasked with preparing for the holiday, we aren’t meant to be its sacrifice.

This year, I am excited to enter into eight days of a holiday I have found magical since I was a little girl, taken by the aroma of chicken soup, the sparkling china on the table, the vase of daffodils, the flames of the holiday lights dancing in the shadows above the sideboard. Mostly, I’m grateful for whoever is around our seder table: It’s the closest to an idyll I get.

Back in the day, we packed our faith together with our belongings and left generations of slavery behind, fleeing Egypt in the dead of night. G-d split the sea in two, allaying our fears by allowing us to walk to safety on dry land. I imagine we stood wiggling our toes in the sand when we reached the other side, shaking our heads in amazement at the sudden and awesome reality.

Finally, this year, I’m awake enough to join in.

MMerri Ukraincik is a writer, blogger, and the author of “I Live. Send Help: 100 Years of Jewish History in Images from the JDC Archives.” Her work has appeared in numerous publications, including Tablet, Hevria, The Wisdom Daily, and Grok Nation. Read more on her website, and follow her on Facebook and Instagram

How I Got Enslaved By A Holiday Of Freedom