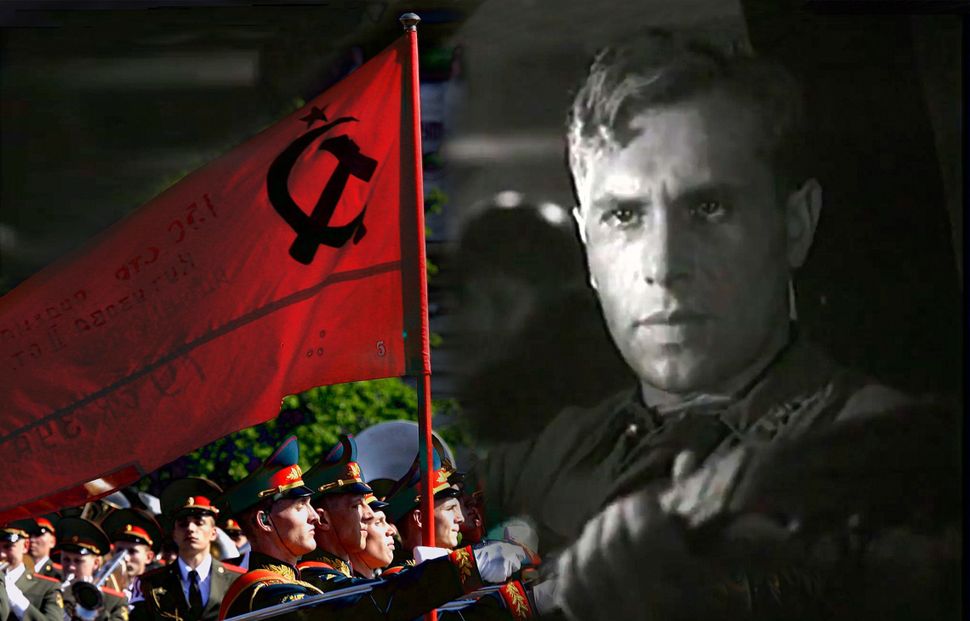 Today is Victory Day in the former Soviet Union, commemorating the USSR’s defeat over Nazi Germany. As Russia’s most important national holiday, today Red Square will be replete with the usual fanfare – larger-than-life military parades, decorated veterans, and of course big, bold numbers performed by the Red Army Choir.

Not all Russian wartime songs are military-style marches the likes of ‘Katyusha,’ however. Some are soft as lullabies, and I heard a great many as a child, sung at my bedside by my Ukrainian-born Jewish grandfather.

I didn’t understand their significance at the time, but they must have made an impression, since I grew up incorporating many into my repertoire. Today, I moonlight as a singer of Russian standards and eastern European folk tunes, and have performed my grandfather’s favorites at bars and cafes throughout New York.

If there’s one thing I’ve learned since embarking down this road, is that in the business of (ethnomusicological) show business, there is often much more than meets the ear.

Take the famous Soviet wartime song, ‘Temnaya Noch’ (Dark is the Night), for example. In the 1943 war film Dva Boitsa (Two Soldiers), actor Mark Bernes captured the hearts of millions with his poignant rendition of Nikita Bogoslovsky’s song about a soldier longing for his beloved while away in service. In the scene, Bernes’ character solemnly strums a guitar, crooning:

Dark is the night, only bullets are whistling in the steppe. Only the wind is wailing through the telephone wires, stars are faintly flickering. In the dark night, my love, I know you are not sleeping, And, near a child’s crib, you secretly wipe away a tear.

Despite its now-iconic status, forever tied to the Great Patriotic War in the annals of Russian pop, it was once disparaged by the regime’s official critics for being “sentimental, trivial and Philistine.” Writes musicologist Tatiana Egorova: “unpretentious and restrained, [‘Temnaya Noch’’] strikingly differed from war songs of the time,” i.e. field marches or other choral numbers endorsing civil patriotism. It was made famous by its unique lyricism, which captured a sense of humanity enduring in service; of personhood otherwise eclipsed by catastrophic warfare.

And yet, like most cultural sensations, ‘Temnaya Noch’’ was destined to enter the realm of kitsch in postmodern times.

Today, Bogoslovsky’s song lives on on YouTube, in renditions ranging from Hvorostovsky’s operatic and austere; to a jazzy, near-unrecognizable version sung by a contestant on Golos, Russia’s answer to The Voice. In my cursory survey of YouTube covers, versions generally fall somewhere between sultry and cheesy, are often in bad taste, and occasionally strike the bizarre.

In my experience, ‘Temnaya Noch’ — much like stadium performances of the national anthem — can tug heartstrings if done right, or draw a surprising amount of ire if done wrong.

Yet technique and delivery only account for so much in judging the performance of a piece so long-embedded in popular culture. So much more is subject to context — which presents all manner of quandaries when performing a tune that is aesthetically gorgeous but carrying historical and/or thematic baggage.

I’ve found this to be especially true of folk music.

As a Jewish vocalist with a penchant for Ukrainian village songs, I’m aware of how exulting in the traditions of my ancestors’ Christian neighbors may be perceived as ironic, at best. I’ve managed to upset at least one Soviet-born Jewish acquaintance with my choice of repertoire, and had to think twice before posting a video of myself once singing a Cossack melody, wary of Facebook friends I might inadvertently scandalize.

All of this is just the name of the folk song game. Music is powerful, imbued with complex meaning and often sorely lacking in footnotes or trigger warnings. While I recognize that culture doesn’t exist in a vacuum and that everyone is entitled to their own opinion (or visceral reaction), this does raise a few important questions: Namely, how does one reckon with the sometimes-fraught underbelly of folk traditions? Who is the authority on what is kosher to perform, and — if we’re talking art for art’s sake — to what extent should politics underpin a performance?

I am Ukrainian-Jewish on my mother’s side, which makes me feel as if I can lay some semblance of a claim to Ukrainian culture (which, again, depends who you ask). But in the case of singing songs from other cultures — particularly historically oppressed ones — I err on the side of caution. As much as I adore the heartrendingly beautiful romances of 19th-century Russian Roma, I wouldn’t perform Romani pieces without offering the least bit of historical context behind them. And what of the appropriation-shaped elephant in the room? Can one be an informed, culturally sensitive artist and still unwittingly do disservice to tradition?

It’s a delicate balance to strike, but not an impossible one. I find that the most successful traditional music projects are those acknowledging the fluidity of culture, and the existence of a shared cultural code between ethnic groups. Some great examples of this would be the Goyfriend/Drug-Goy program presented by Sasha Lurje and Litvakus, the klezmer collective led by ethnomusicologist Zisl Slepovitch, and Night Songs From a Neighboring Village presented by master musicians Michael Alpert and Julian Kytasty. Both collaborations explore the complicated relationship between Jews and their gentile neighbors, taking great pains to not portray the relationships as definitively hostile or one-dimensional.

But even scholarly undertakings like these barely scratch the surface of the convoluted (musical) politics of Eastern Europe. While there is no guidebook on the ethics of performance, a good rule of thumb is to always do your homework, stay as informed as possible, and be aware of your own privilege (a good rule of thumb for life, generally). And, as ever, be sure to know your audience. Chances are you won’t please everybody. Unfortunately for us musicians, you don’t need a PhD in ethnomusicology to have an opinion — when it comes to folk music, as with everything else, everybody’s a critic.

Samantha Shokin is a freelance writer and vocalist. She works at the Center for Traditional Music and Dance and resides in Brooklyn. Visit her at www.samshokin.com.