Not every bagpipe-playing altar boy considering joining the priesthood grows up to be a Hasidic Jew — but Ian Sherman did.

Ian, known today in many circles by his Hebrew name Ephraim Eliyahu, was born to a Scottish Catholic mother and an Eastern European Jewish father, and was raised in Goshen, New York.

Brought up Catholic, Sherman was christened and baptized at an early age, later serving as an altar boy. His mother’s older sister was a nun, which always fascinated him as a child.

In third grade, Sherman’s parents enrolled him in a Catholic school.

It was two years later when he heard about a local place offering bagpipe lessons and signed up. 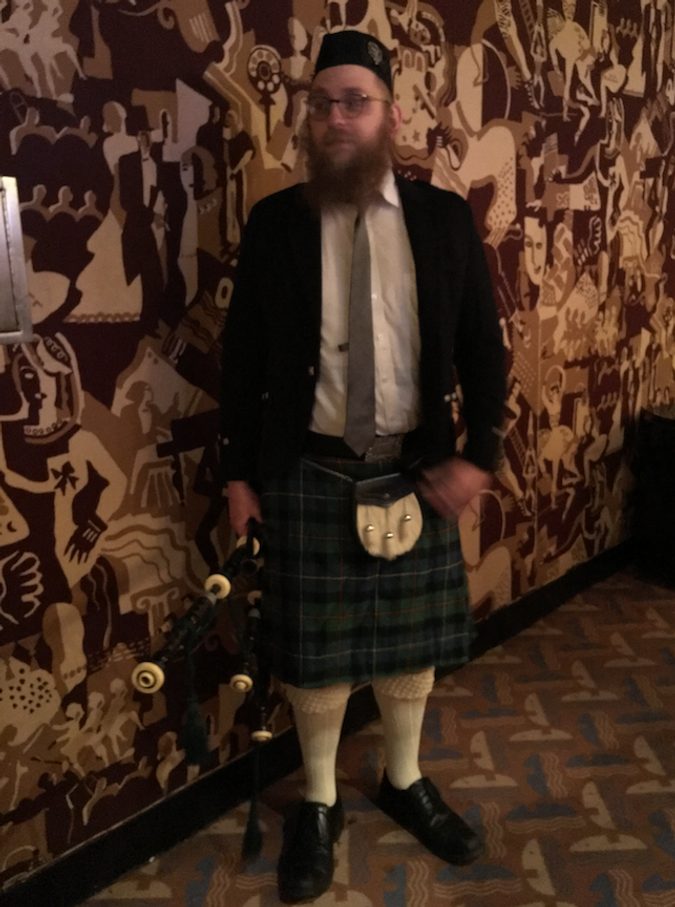 By the time he was a teen, he played well enough to be invited to perform at weddings and funerals. Around the same time, he considered enrolling in Dom Bosco, a prep school that funneled boys into the seminary and priesthood, but decided against it in the end — instead planning to go to Hunter College for a nursing degree. “I was only at Hunter to get a nursing degree because firefighters need a second job to make ends meet, and carpentry wasn’t my thing,” he says now.

Though carpentry may not have been his thing, when his friend Larry invited him to help build a sukkah at the local Chabad House, he agreed.

It was there he met Rabbi Dov Yonah Korn and his wife Sarah, who would later become his mentors.

“Over time it was clear to me that Orthodox Judaism was where I belonged in the world,” Sherman says, adding, “ Before I had a lot of questions, there seemed to be a lot of holes and things didn’t make sense. Judaism washed all those questions away for me. Finally, I could take the spiritual and make it practical in my every day life. I now had the mystical along with the theoretical.”

After a heart-to-heart conversation with his concerned mother and getting her blessing, Sherman took on a series of time-consuming and laborious studies for eighteen months. In 2006, two days before Chanukah, he became an Orthodox Jew.

Many things in Sherman’s life have changed since his conversion. For instance, as he became more observant and grew out his beard, he had to give up his volunteer firefighter position and his dream of joining the FDNY because he says his full beard precludes him from wearing the breathing mask of a firefighter because it cannot seal around his face. Nursing has become his passion now.

While life may have taken an unexpected turn in the religion department, Sherman is not alone. His wife of nine years, Tara was born into an Irish Catholic family and like Sherman, became drawn to Judaism in college and decided to convert. 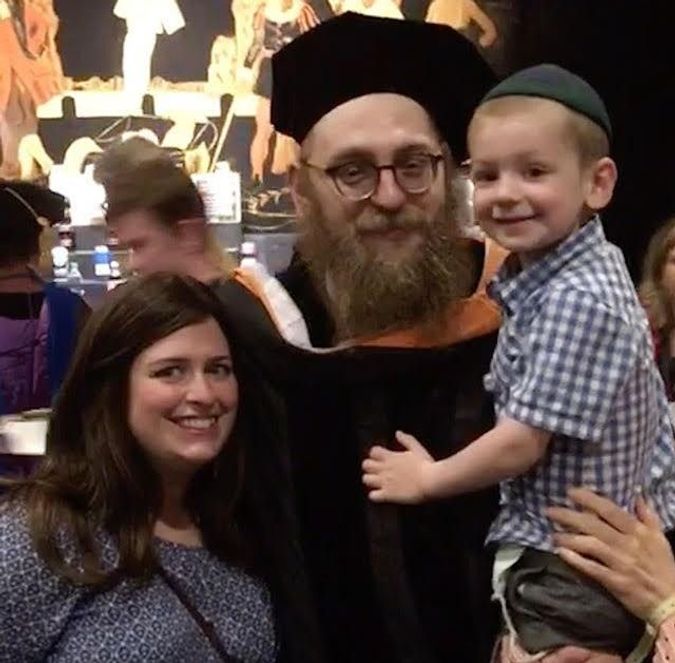 One thing that hasn’t changed though is his love of music and playing the bagpipes. Sherman says he “still plays mostly traditional Scottish tunes, as Jewish music doesn’t usually fit in the bagpipes very narrow nine note range.”

While it may seem unusual to see a Hasidic Jewish man in a kilt playing the bagpipes, Sherman is quick to tell you he’s not the only member of the tribe to do so, referencing another one of his mentors Rabbi Avraham Bloomensteil of Dallas, Texas along with a few others he’s heard of which include a husband and wife duo, a man informally known as “the Crown Heights bagpiper” and even a guy he says plays competitively.

This past week, Sherman took on two distinct roles at the Class of 2018 Hunter College Graduation ceremony. He was a proud graduate, having now earned a Nurse Practitioner Masters and Doctorate of Nursing Practice, and he was also a performer, playing a tune called “The Rowan Tree” on his bagpipes for the crowd of nearly two thousand graduates and their guests at Radio City Music Hall.

Between his studies, nursing career, a wife and three year old son and another child on the way, there’s not much time to practice the bagpipes. “Even if I did have the time, I don’t think my neighbors would particularly appreciate it,” he said. “But it’s like riding a bike. I just dust off the cobwebs, pick it up and get back on it.”