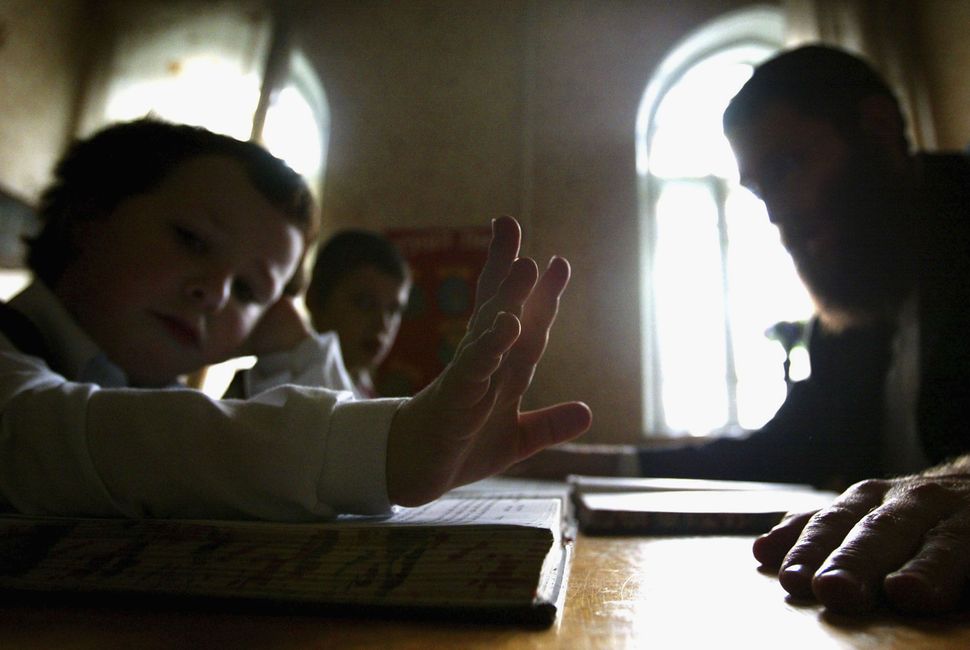 Young Jewish children undertake their daily studies at a heder, or Torah school, December 9, 2004 in the Ukranian port city of Odessa. A thriving jewish community of some 80,000 in the Odessa region underpins a network providing for educational, spiritual and care needs. Image by Getty Images

If you open the Talmud, to the first chapter of Kiddushin, you’ll find that it has plenty to say about how to treat one’s parent — a fitting reading for Father’s Day.

Four of the Torah’s commandments address how children must behave toward their parents.

Most famously, the Ten Commandments: “Honor your father and mother.” It’s one of the few lines most people have memorized from the Torah, and chanting it at your children is a tried-and-true parenting technique. The Torah goes into more specifics than just “honor” — it also forbids cursing or striking a parent. (It’s soothing to know that even biblical families needed these rules nailed down.)

The final parent-oriented commandment (Leviticus 19:3) demands that one shall have “yir’ah” for their mother and father. “Yir’ah is a term that is generally translated as “fear” but can also mean “awe” or “reverence”.

The exact language in that Leviticus commandment is “One shall have yir’ah for their mother and father.” The Talmud explains the meaning of “yir’ah,” and notes that the mother precedes the father here, a reverse of the order in the Ten Commandments. The Talmud comments: “A son [naturally] has more yir’ah for his father than his mother, for his father teaches him Torah; the Holy One placed yir’ah of the mother before the father.”

If yir’ah means fear, then the Talmud would say that children fear their father more than their mother because the father is stricter, or scarier, or strikes them harder. But if yir’ah means reverence, we can understand why children would have more reverence toward the parent who teaches them Torah.

So it is not a mitzvah for children to fear their parents. It is a mitzvah about reverence for the people — mothers and fathers, alike — who connect their children to our great tradition. In my home, and many others, this is the purview of both parents.

The Talmud’s exemplar of parental honor is a non-Jew from Ashkelon named Dama ben Netina. ben Netina turns down the business opportunity of a lifetime because his father was sleeping on the keys to the merchandise, and he didn’t want to wake him. 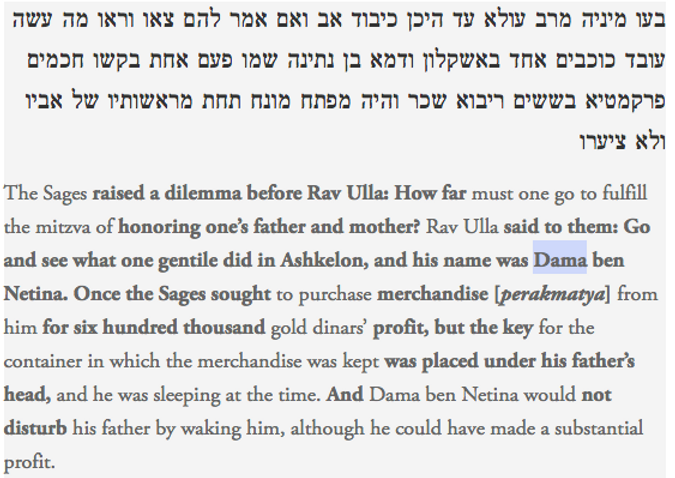 Another tradition records that his mother tore the fancy clothes he was wearing in the presence of Roman noblemen, while he sat silently and bore the embarrassment. This must be roughly the equivalent of showing up at your child’s high school and making him publicly don overalls. But ben Netina allows it.

A comment from the Tosafists sheds new light on these stories. They cite a tradition that Dama’s mother was insane. Perhaps his father was, too. After all, most fathers would want to be woken up if it meant concluding a lucrative transaction. A normal mother would want to be stopped before she causes such embarrassment to herself and her child. Nobody, say the Tosafists, should be forced into overalls in front of his teenage peers (so to speak.)

The implication here is that the duty to honor your parents is specific to your parents. It means knowing and understanding the specific situation and temperament of a parent, and showing them respect accordingly.

It’s All About Tone

A statement by Avimi bar Rabbi Abahu cited in the Talmud highlights the importance of subtle, human elements to the mitzvah of parental awe: “One can feed his father pheasant and it removes him from the world, and another can make his father grind at the millstone and it brings him into the world to come.”

Rashi explains that if one feeds his father delicacies begrudgingly, with complaints about how much it costs him, he has not truly honored his father. On the other hand, assisting one’s father in regular work is indeed a form of respect. Rashi then cites a passage from the Palestinian Talmud about a man who was drafted indefinitely into the imperial service. His son, who worked at the millstone, offered to take his father’s place and install his father at the mill.

The mitzvah of honoring one’s parent, according to the Talmud, is defined by context — and by how the actions are interpreted and experienced by the parents. A great bottle of whiskey isn’t a good gift for a father who’s more interested in wine these days, in other words.

Honoring a parent is not like the mitzvah of blowing a shofar or eating matzah. Our parents are not objects with which we perform mitzvot. In fact, perfunctory deference that they can detect as mere lip service is no honor.

Perhaps what the Talmud is telling us, through these stories, is that there can be no rule book that tells us how to revere and honor our parents. The most that our texts can do is give us guidelines and present scenarios that show how the ancient rabbis honored (or failed to honor) their parents under specific circumstances.

It is up to us to interpret these guidelines and apply them to our own lives. A little fear, a lot of honor, reverence for the Torah — and maybe a thoughtful gift — ingredients for a great Father’s Day.

Elli Fischer is a rabbi, translator, and writer living in Modi’in, Israel.