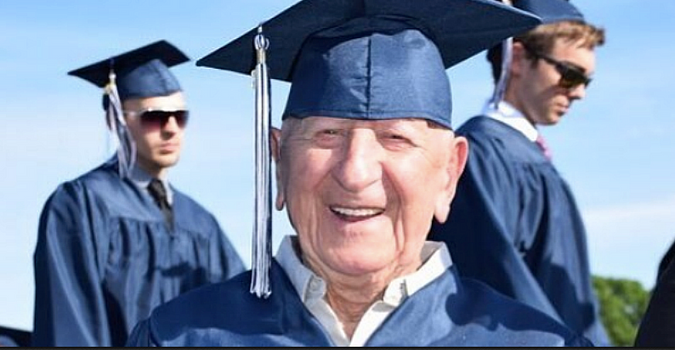 “I just woke him up to tell him [that you called] and he was very excited,” Leah says about her father, long time Forward reader Mordechai Miller.

For a Holocaust survivor like Miller, receiving an education during the war was unusual. “My education from Poland was nothing. I only made it to the first grade in ‘39,” he explains. Thankfully, the now-Long Island resident survived the war in hiding with his family.

“I was a hidden child. [I was hidden] in a forest, in a bunker, by Polish people. We paid them money to hide us out,” he remembers.

The only form of education Miller did receive after the age of 8 years old came at a makeshift school in Germany’s Displaced Persons Camp. Eventually, his family made their way to the United States after a stint in Israel, where Miller served in the Israeli Army. When the family finally arrived on American soil, his father became sick. “Me and my brother went to work to make a living,” he says.

Even without any formal education, the self-made man speaks multiple languages fluently, and was able to open up his own junkyard business, which thrived. Over the past 30 years, the optimistic survivor has travelled to different public schools near his home, speaking about his experiences in Nazi Germany. He feels it is his duty to bear witness — both for those who claim the Holocaust never happened, and in honor of those who didn’t survive to tell their stories.

Miller’s daughter Leah remembers, “Education was always a big priority for my father. He always pushed to ask questions and learn more. He doesn’t blindly believe what anyone says just because someone is in power.”

Now, at the age of 87 with a loving wife, four children, six grandchildren, and two great-grandchildren, Miller has finally been recognized for learning — he received a high school diploma from Smithtown High School just a few weeks ago.

“I was involved with the school for ten years,” he said. “I felt honored. They made a big thing about it.” He sounds, more than anything, excited.

His daughter Leah took to Instagram to show her appreciation to the Long Island high school for helping to fulfill her father’s life-long dream of achieving a diploma. “He made it a priority to educate people about the Holocaust, something he continues to do while fighting pancreatic cancer,” she wrote. “Thank you to everyone who supported him, listened to his story, and made this happen.”

If you were looking for a pick-me-upper amid the latest morbid immigration news, Miller’s story — a story of the triumph of truth and knowledge over baseless hatred — may be just the thing.

My dad finally got his high school diploma! Born in Poland, he wasn’t allowed to get an education past first grade, because the Nazis invaded Poland and banned Jews from getting educated. He survived with his immediate family by hiding out. He moved to the US and became a self-made man, marrying a great woman, having four children and a thriving business. He made it a priority to educate people about the Holocaust, something he continues to do even while fighting pancreatic cancer. At 87 years old he finally got his diploma. Thank you to everyone who supported him, listened to his story, and made this happen. #smithtown #holocaust #survivor #graduation2018 #happy

Mazal tov, Mr. Miller! Thank you for being both a student and a teacher.

Bonnie is an intern at The Forward