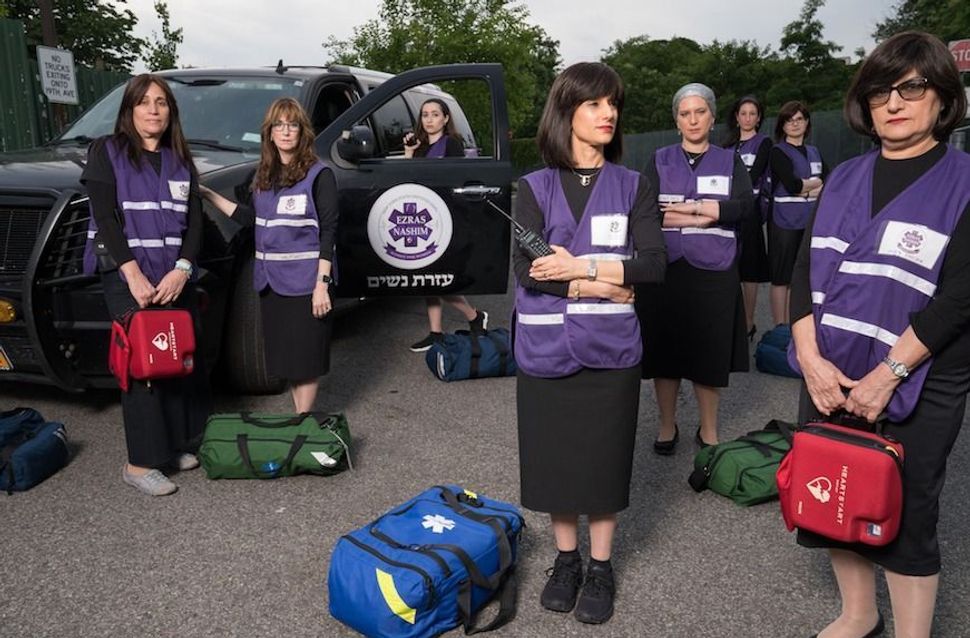 (JTA) — Like many heavily Orthodox sections of Brooklyn, Borough Park has been served for decades by an all-male volunteer ambulance corps called Hatzalah.

The corps caters to a religious Jewish community with particular needs and customs — including one custom that can increase the tension for patients in already stressful emergency situations.

The strict boundaries between men and women are familiar to anyone who has attended an Orthodox synagogue or has read the stories of airplane flights being delayed because haredi Orthodox men refuse to sit next to women.

In the event of a medical emergency, the male Hatzalah volunteers may touch women — if, for example, a woman needs to be moved to a stretcher or requires assistance while giving birth. But while Jewish law has its exemptions, women concerned about the rules of modesty have plenty of reasons to prefer treatment by a female EMT.

“93Queen,” Orthodox filmmaker Paula Eiselt’s big-screen debut, documents one woman’s attempt to create an all-female version of Hatzalah with only strictly observant Orthodox members. In a statement, Eiselt explains that over four years of filming, she essentially operates as a one-woman crew.

The film opens July 25 in theaters in New York City and Aug. 14 in Los Angeles, with a wider release to follow.

The woman behind the female corps is Rachel “Ruchie” Freier, a lawyer and Borough Park native. She assembles a group of volunteers who are tentative at the start. And, not surprisingly, her plan sets up a clash with the establishment Hatzalah and its supporters. Opponents threaten to boycott the hospital that is training the women and the companies that sell them medical supplies. They also post nasty comments on Twitter, such as “God have mercy if you wait for them to get their make-up and the right dress on.”

But Freier’s leadership and inner strength help the members of what they call Ezras Nashim (“helping women”) persevere.

“The worst thing you can tell me is that I can’t do something because I‘m a woman, a religious woman,” she says.

Part of Freier’s fortitude manifests itself in a my-way-or-the-highway manner. When she insists that only married women can join the team, some members object — including an experienced EMT who recently became religious — and others resign.

“There’s a whole host of issues that come up in a marriage that will give you that level of maturity,” she says.

Though the film is gripping, the viewer is never entirely sure how it all works. The women on call respond from wherever they are to the scene of the emergency. However, it does not appear that Ezras Nashim owns its own ambulance. It contracts with a private company to provide patient transport. Who staffs that ambulance? Men? Do the women EMTs accompany patients in the ambulance?

There are other questions. At one point Freier says she refuses to let the project fail because that might blemish her image and hurt her plans to run for a judgeship. Was the ambulance fight just a way to build a political base, to get her name out there? Does it matter?

In the end, Freier must be doing something right: Last year, Ezras Nashim won the New York Basic Life Support Agency of the Year award, a high honor. And in 2016 Freier was elected as a judge in New York City’s 5th Civil Court District, becoming what is believed to be the first Hasidic woman elected to public office in the United States.

Eiselt calls her film a story of “proud Hasidic women challenging the status quo of their own community and refusing to take no for an answer from the all-powerful patriarchy.” Regardless of your background — religious or atheist, feminist or nonpolitical — “93Queen” is a film that will get your juices boiling.