In Israel, There Are Poetry Slams For The Deaf 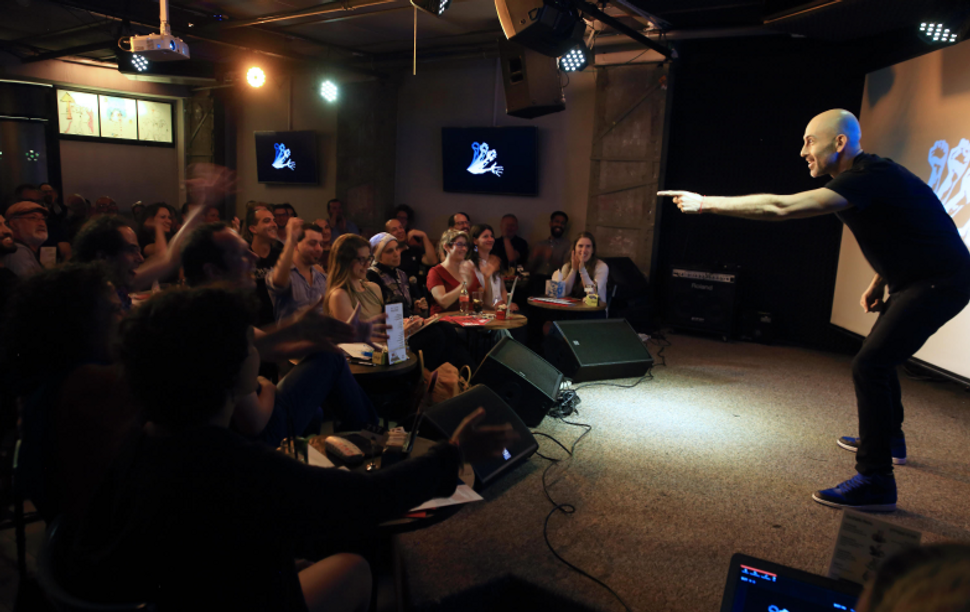 The audience in the Jerusalem basement bar is silent as Douglas Ridloff takes the stage and begins gesticulating, his expansive and wild movements matched by a series of exaggerated expressions reminiscent of Jim Carrey’s early work.

His bald pate gleaming in the spotlight above a stubbled beard, Ridloff cuts a sparse figure in his loose black v-neck tee and dark jeans, his blue sneakers providing the only splash of color on his lean body. As he extends his arms in a series of movements, a sign-language interpreter wearing a traditional headscarf maintains in a low-voiced and intermittent narration, interpreting his routine as a call for unity and cooperation among members of Israel’s Deaf community.

Suddenly, Ridloff stops his set and points at me, a feigned look of rage spreading over his face. He pantomimes typing and looks askance. Sheepishly, I stop taking notes, and join the audience of several dozen people in copying Ridloff’s gestures. This happens several times as the American poet and visual storyteller goes through the rest of his act, and each time the audience has a good laugh at my expense.

It is a typical evening of performance art except for one crucial difference: the room is completely silent throughout the evening.

“Our gift of sign is unique,” Ridloff signed as he left the stage. “It’s a gift of the universe for us. Be strong.” 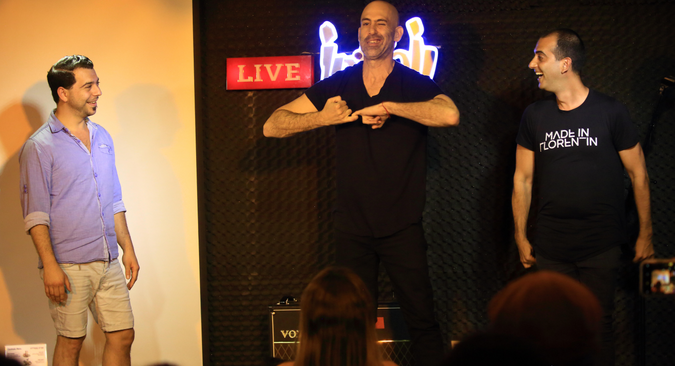 Marketed as an ASL (American Sign Language) Slam performance, Monday evening’s event was one of a series of recent collaborations and workshops for the Deaf community organized in Israel by the SignTalk Foundation, a US-based advocacy group that is promoting the launch of SignTalkers, a new social network geared toward the signing community.

“I realized that there wasn’t an online community that’s available where the signing community can get together and communicate in sign language,” SignTalk founder Dr. Joseph Geliebter told the Forward. Sitting in a corner of the bar before Ridloff’s performance, Geliebter – a native New Yorker from the Upper West Side – said that he had wanted to “build a space where people can exchange ideas and communicate with other people with the same interests but in sign language.”

Israel is “head and shoulders” above its neighbors in terms of accessibility and opportunities for the signing community, though still has not fully caught up to the United States (Israel does not yet have its own ‘Disabilities Act’) — but in some ways Israel has even surpassed the States, says Geliebter. “On the news, there is always captioning and sign language and you don’t see that in the US.”

For his part, Ridloff, who is married to Broadway star and former Miss Deaf America Lauren Ridloff, seemed enthused about the state of the Deaf community in Israel. Coming here after stops in Norway and Australia, he said that he felt a “spiritual connection” to Israel during his previous (and first) visit to Israel a decade ago and that ”was when me and my and my wife decided we were ready to have children.”

Now, ten years later, Ridloff is back with his son in tow, and is gathering impressions of how the hearing impaired live here.

“I don’t really know about their fights and struggles but from what I’ve seen and what they’ve told me they say that they are brought up very oral and [it’s only] recently, like seven to eight years ago, that the signing really began to take off,” he told the Forward.

“I feel like they’re very focused on being oral. They’ll get there but their first choice is hebrew as opposed to ISL (international sign language) but I think the community is great,” he continued. “They are connected and have a sense of humor and have a strong identity and they are proud to be Deaf.”

That much was evident from his performance, which featured poetry by a wheelchair bound American immigrant he met in the Jerusalem shuk and multiple impromptu performances by audience members shanghaied into the show.

And as for my typing during his performance? He said that it didn’t disturb anybody (I’m a very loud typist) but he was glad I was there so that he could use me for comedic effect.

In Israel, There Are Poetry Slams For The Deaf