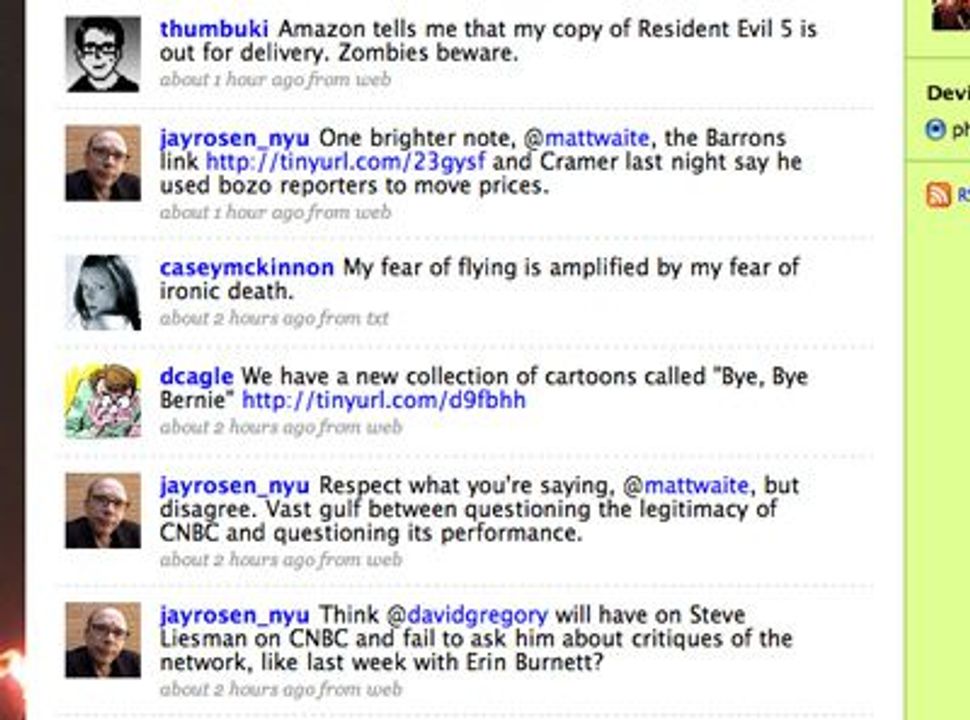 Your Twitter Page: Where your best friends rub tweets with the stars. Image by COMPOSITE SCREENSHOT LIEL LIEBOVITZ

Imagine, if you will, the following scenario: A modern-day Moses, standing atop Mount Sinai, has just received the Ten Commandments. Looking down, he sees the Israelites, impatient to hear the word of God. He pulls his iPhone out from the creases of his robe and starts tapping on it furiously. The Israelites, Moses knows, all follow him on Twitter, and so he tweets the whole congregation, condensing the fundamentals of Western morality to 140 characters. He then takes a photo with his phone, which he posts immediately to his Tumblr account; the people, he knows, will be blogging about this moment for ages to come. 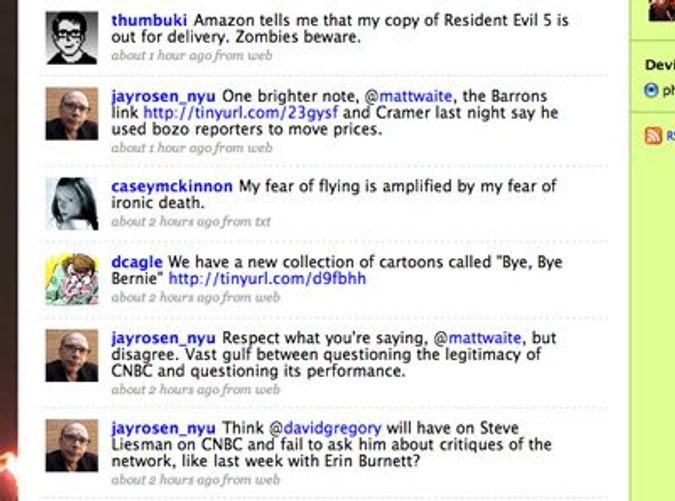 Your Twitter Page: Where your best friends rub tweets with the stars. Image by COMPOSITE SCREENSHOT LIEL LIEBOVITZ

If any of the references in the previous paragraph left you bewildered, don’t despair: This may not necessarily be a sign of your own technological illiteracy, but yet another indication that our new ways of conveying information, briefer and more immediate, are leaving a growing number of us, quite literally, at a loss for words.

For the People of the Book, this may be a very big problem.

Before we proceed any further, a brief history is in order: In the beginning was the word, and the word was good. Then came the book and the newspaper and the pamphlet, and for centuries, mankind was satisfied with communicating in print. All this, of course, changed as soon as the personal computer and the Internet gave rise to all manners of electronic personal expression. Which leads us to Jorn Barger.

Largely acknowledged as one of the founding fathers of blogging, Barger, an Ohio resident and facial-hair enthusiast, started his site, Robot Wisdom, in 1989, mainly to publish essays about such disparate topics as James Joyce and artificial intelligence for a small community of likeminded geeks who could speak a host of computer languages and navigate the Net’s then-unfriendly waters.

A decade later, with the Internet becoming commonplace, Barger had his eureka moment: An ideal Web outpost, he thought, would concern itself less with creating new content and more with aggregating existing materials. There was less need, he claimed, for the sort of long and thoughtful pieces he himself was fond of writing, and more need for pithy dispatches that linked to other people’s work, often accompanied by a bit of sharp opinion or value judgment. A Web site, in other words, should resemble not a book, but a personal journal or a log. And as it lived online, it would be called a Weblog. Ever the student of playful, modernist literature, Barger switched around the term, coming up with “we blog.” A new term, blog, was created, a noun and a verb alike that described the habit of frenetically linking and commenting that more and more people were now finding irresistible. According to the blog search engine Technorati, in 2007, barely 10 years after Barger first coined the term, there were more than 112 million blogs in existence.

Much, of course, has been said about the pros and cons of blogging: Anyone can have a blog, lowering not only barriers to publication, but also standards of writing and reporting. Anyone can have a blog, thereby allowing more voices into the conversation and bolstering democracy. It’s refreshing to hear so many perspectives. It’s tedious to have to listen to so many voices. Blogs give power to the people. Blogs reduce the mysteries of life into minutiae.

Just as these debates were making their way, going from the depths of dorkdom to the sunny meadows of the mainstream media, rapidly changing technology made blogging seem nearly obsolete. We are now living in the age of microblogging.

As developments occur at a breakneck pace, there is little need to try and place things on a timeline. What you do have to know is this: At some point, probably early in 2007, writing blog posts — averaging, usually, around 300 to 500 words — began to seem like an imposition. Even blogs, after all, demanded a modicum of respect for the English language and a few minutes to form a coherent thought. What was needed now was a “quick and dirty stream of consciousness” containing only “the barest whiff of a finished published work… really just a way to quickly publish the ‘stuff’ that you run across every day on the Web.”

The aforementioned statements come from Jason Kottke, another respected elder of the blogosphere. He was writing in 2005 to describe Tumblr, a blogging platform that favored microscopic posts, often just snapshots or short video clips, over actual sentences. This revolution, commonly referred to as microblogging, was completed in 2007 with the advent of Twitter, a service that allows its users 140 characters to answer this maddeningly mundane question: What are you doing?

The service’s 5 million users spend their days providing brief status updates, often as they enjoy such a thoroughly ordinary activity as eating dinner, working out or walking around. Barack Obama was among the twitterati as he campaigned for president, as are most media personalities, a smattering of politicians and a growing swath of corporations. And unlike, say, text messaging or communicating via the popular social network Facebook, Twitter and Tumblr are not platforms for interpersonal exchanges, but rather means of publishing one’s missives to the world at large, as pithily and immediately as possible.

Examining this thinning of language — these starved forms of communications that favor the quick and the inconsequential while remaining unsuited for thoughts that may take space to unfold and time to read — it is easy to succumb to a technologically deterministic depression and declare the end of intelligent civilization near. But since Jews have been forever defined — even constituted — by our relationship with the book and, as a result, with the written word at large, we must pay special attention to these winds of change. Without being unduly alarmist, one can say that the Internet may be killing off the Jewish mind.

If you’re looking for an easy point of entry into this discussion and are given to conspiracy theories, feast yourself: The very same Barger of blogging fame is also — can you guess it? — a noted antisemite who suggested that the Jewish idea of chosenness was comparable to Hitler’s ideology. Barger placed the catchphrases “Judaism worships fraud” and “Judaism is racism” atop his blog.

For centuries, we have been the high priests of commentary, writing books that comment on books that comment on other books. The Talmud, famously, is the masterwork of this practice, containing both text and interpretation, and presaging, in its unique structure, the coming of hypertext — as Jonathan Rosen famously argued in his 2000 book “The Talmud and the Internet.” But for all our devotion to commentary, we were always strongly committed to one sacred source: the object of all our investigations and interpretations, the divine word we sought to understand.

And the new culture of microblogging, for all its enthusiasm for commentary, lacks precisely this source: The twitterers and tumblrs are not debating with each other the merits of one urtext, several key documents or even substantive issues in the raw; rather, they are commenting on commentaries. They’re like Talmudists who have never read the Torah, as they are given purely to speculation and whim.

The real Talmudists, then, not just the literal ones, but also those of us who apply the same pilpul — or method of intricately examining every iota of meaning in a given text — in academia or in journalism, in court or from the legislator’s bench, must be warned. As the move to microblogging plagues everyone, plunging society in its entirety toward a collective mindset of subjective drivel communicated in short and syntactically stricken sentences, Jews may do well to step up in defense and preserve not only the ailing medium with which we are associated, the book, but also the sort of thinking this medium shapes, analytical and expansive and exhaustive. And as all around us the world’s atwit with Twitter, let us remember that it is only great things — the word of God, say, or, at the very least, a masterful novel — and not the piffle of everyday life that truly merits comment.

Any old rabbi can tell you that. So can Barger. After all, he came up with the crisply titled “Inverse Law of Usenet Bandwidth” — namely, the more interesting your life becomes, the less you post on your blog. Amen to that.

Liel Leibovitz is the author, most recently, of “Lili Marlene: The Soldiers’ Song of World War II” (W.W. Norton & Co., 2008). He has a doctorate in video games. Seriously.