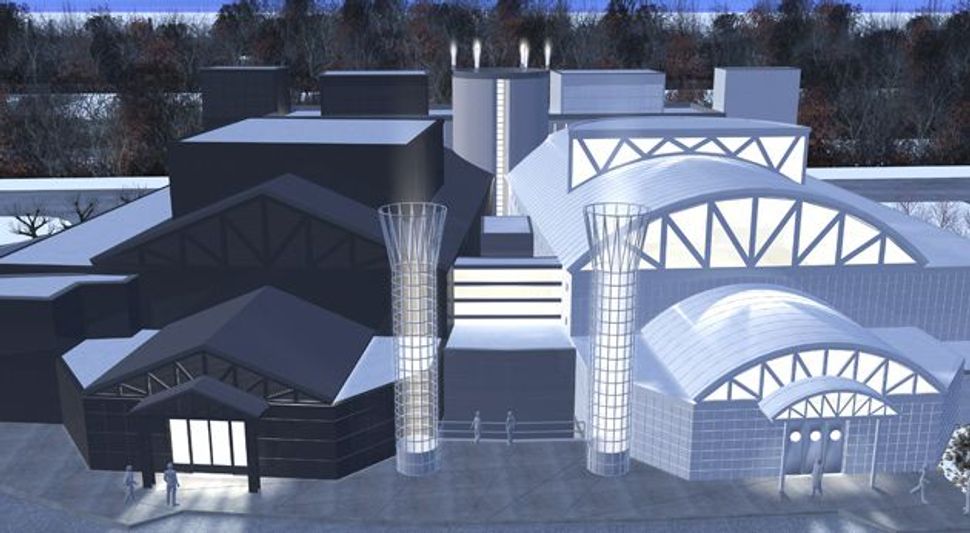 Where it Began: A rendering of the Illinois Holocaust Museum & Education Center, designed by architect Stanley Tigerman. The facility is set to open April 19. Image by COURTESY OF BUILT LIGHT INC.

When former president Bill Clinton officially opens the Illinois Holocaust Museum & Education Center later this month, the village of Skokie will stake its claim on history. Holocaust history, to be sure, but also — and perhaps more significantly — as the place where the seeds of the Holocaust education movement in the United States were first planted in response to a neo-Nazi march.

“It’s not going too far to say that Skokie really catalyzed the way we learn about the Holocaust today and the way we apply lessons of the Holocaust to understanding and learning about contemporary genocide,” said Richard S. Hirschhaut, executive director of the IHMEC. “In the late ’70s, Skokie put the whole subject on the map.”

Many involved with the project believe that this will be the last major Holocaust museum built with the direct input of survivors, the youngest of whom are in their late 60s and early 70s.

What makes this museum different from all other Holocaust museums is the story behind its location. The exhibit dedicated to telling that tale could very well be the museum’s most inspiring lesson.

In the years after World War II, Skokie, located 16 miles northwest of Chicago’s Loop, became a Jewish enclave as people left the city for its new and affordable ranch and split-level houses. Holocaust survivors were among the thousands of Jews who moved there, eventually making it home to what was believed to be the largest per capita concentration of survivors outside Israel.

Skokie’s Jewish identity prompted a group of neo-Nazis led by Frank Collin to seek a permit to march on the village in 1976. Legal battles as to whether the National Socialist Party of America had the right to demonstrate dragged on for

two years. At the time, there were thought to be 7,000 to 8,000 survivors living in Skokie, and nearly half the population was Jewish.

The proposed march rallied the survivors, who until then had been mostly silent about their painful pasts. Attempts by the village to thwart the march resulted in a lawsuit that became a lightning rod for First Amendment rights that eventually reached the U.S. Supreme Court. Although Skokie did not win its case in court, Collin ultimately decided to march in Chicago instead.

But the day the march was scheduled to be held in Skokie “was one of the most frightening days and moments for all of us,” recalled Fritzie Fritzshall, a survivor of Auschwitz-Birkenau and a vice president of the museum’s board of directors. “Being told to pull the shades. Been there, done that. We didn’t want to pull down our shades again. And that is how the museum came to be.”

Meanwhile, the Skokie controversy made national news, spawned a made-for-television movie watched by then-president Jimmy Carter and planted the seeds for the creation of the United States Holocaust Memorial Museum in Washington.

“That was the shot heard round the world for the Holocaust education movement,” said J.B. Pritzker, who, as campaign chair for IHMEC, has helped raise nearly $40 million of the $45 million needed for the new museum.

The IHMEC has all the makings of a world-class institution. A striking edifice of dark and light, angles and curves, the building was designed by internationally renowned Chicago architect Stanley Tigerman. Its exhibits were co-designed by Michael Berenbaum, former project director of the U.S. Holocaust Memorial Museum, and Yitzchak Mais, former director of the historical museum at Yad Vashem, Israel’s official Holocaust memorial.

At the April 19 grand opening, Clinton, who presided over the opening of the U.S. Holocaust Memorial Museum in 1993, is scheduled to deliver the keynote address. Elie Wiesel, Holocaust survivor and winner of the Nobel Peace Prize, is also slated to speak.

At 65,000 square feet, the IHMEC will be the fourth-largest Holocaust museum in the United States, according to Berenbaum. Staffers are conservatively estimating an annual attendance of 250,000, 180,000 of whom will be schoolchildren. In comparison, annual attendance at the Holocaust Museum in Washington averages 1.75 million a year. Although the new museum tells much of the story of the Holocaust through the voices and artifacts of Midwest survivors, it aims to be more than a regional institution; it has already forged ties with other international museums, and to further its mission to educate about genocide beyond the Holocaust, the museum is involved with the Cambodia Tribunal Monitor — a Cambodian court — to record and translate the genocide tribunal going on in Cambodia.

Upon entering the museum, visitors descend into the dark building to learn the story of the Holocaust; at the end, they emerge from the light building (symbolism intended). They will be joined on their tour by the audiovisual presence of 60 to 70 survivors, most from the Chicago area and all from the Midwest, via material that was gathered as part of Steven Spielberg’s Survivors of the Shoah Visual History Foundation (now the USC Shoah Foundation Institute). In the museum’s library, visitors can access all of the 2,100 testimonies from the Midwest that were collected by the institute.

The museum has amassed more than 8,000 artifacts from locals, Hirschhaut says. One extremely rare find emerged from under the bed of a 96-year-old resident at a nursing home: a previously undiscovered painting created at Theresienstadt, a concentration camp in what is now the Czech Republic. One side depicts a pastoral scene mandated by the Nazis; on the reverse are depictions of the actual horrific conditions. Also showcased will be a brassiere that local resident Hannah Messinger stitched together, using clandestine materials, while at the Merzdorf labor camp. Hirschhaut sees the bra as an example of “one individual’s refusal to surrender her dignity. There’s tremendous power in this artifact.”

Both artifacts point to the efforts people made to resist the Nazis using whatever means they had available to them, a narrative distinction that separates the Skokie museum from others, according to museum officials. “We try to balance telling the story of who the killers were and also who the victims were,” Berenbaum said. “The Jews were powerless, but that doesn’t mean they were passive, so we show a range of Jewish responses.” Fittingly, the opening date of the museum corresponds to the anniversary of the 1943 Warsaw Ghetto Uprising, the greatest example of Jewish resistance during the Holocaust.

The desk and eyeglasses of Holocaust survivor and Nazi hunter Simon Wiesenthal will be on view, as will an original volume of the Nuremberg Trial transcripts that had been hidden away in a suburban library. But what’s likely to garner the most attention from visitors is a vintage German railcar, the type used to transport millions of Jews to concentration camps. Housed in the cleave that divides the two buildings, the railcar is bound to be “a very powerful and poignant moment for the visitor if he or she chooses to enter the car,” Hirschhaut said.

The Legacy of Absence exhibit, a project that was originally funded by the Rockefeller Foundation and given a home in the museum, will showcase art related to scenes of modern genocide.

“The art is quite unique and compelling,” Pritzker said. “You would think it would be harsh and violent and gory, but most of it is not. It is as much about the subject of memory and human failing and the general subject of oppression as it is about the subject of genocide in its various forms, whether it’s Rwanda or Cambodia or the Holocaust.”

The youth exhibition, geared to children ages 8-11, is the core of the museum’s mission. Not wanting to expose young visitors to death and violence, museum designers took a broader approach, emphasizing tolerance and social and civic responsibility, and taking a stand against discrimination.

“We’re trying to teach children the universal lessons of the Holocaust,” Pritzker said.

The new museum can trace its own origins to a small storefront museum in downtown Skokie, founded by Holocaust survivors who banded together in the wake of the attempted neo-Nazi march. Although the survivors didn’t have much in the way of financial or political resources, they were determined to instruct people on the past, in hopes that it wouldn’t be repeated. In 1981, they formed the Holocaust Memorial Foundation of Illinois; in 1984, they opened the 5,000-square-foot museum that drew tens of thousands of visitors annually. Around the time the museum opened, they established a speakers’ bureau and outreach program that took survivors into schools to share their message with students.

The survivors knew they had outgrown their space, and as the number in their speakers’ bureau continued to dwindle, they sought to create a more permanent way to continue their teaching mission, said Sam Harris, 73, a child survivor of the Deblin and Czestochowa concentration camps and president of the museum’s board of directors.

But they were out of their league in terms of raising money. Harris set his sights on enlisting Pritzker to chair the capital campaign. Pritzker, a Jewish billionaire who is a member of the family that owns Hyatt hotels and is a managing partner of a venture capital group, admits that initially, he was reluctant to take on the project.

He sent off Harris with a to-do list that included hiring an architect and obtaining state funding; Pritzker didn’t really expect to hear from Harris again. “They came back six or eight months later and said: ‘We did them all. Would you lead the museum campaign?’”

At that point, Pritzker was hooked. “These survivors have put their heart and soul into building this museum. They didn’t have the money to do this, but they had everything else, especially the passion about educating young people.”

For more information about ticket prices, directions and visitor hours go to the museum’s Web site at www.ilholocaustmuseum.org.