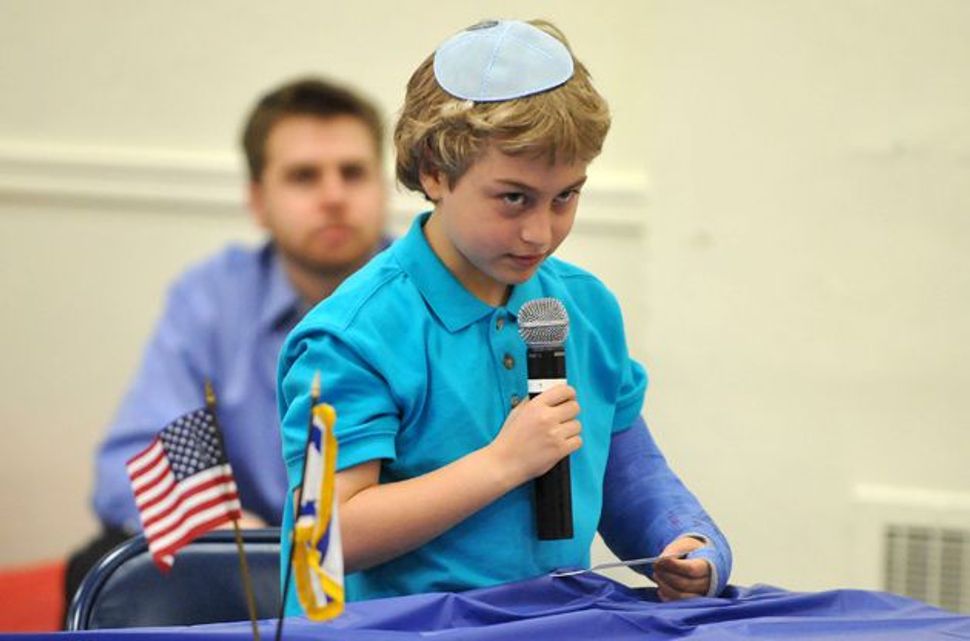 ?A? for Effort: Misha Lerner, a fourth grader at a Jewish day school in Washington, poses a tough question on torture to former U.S. secretary of state Condoleezza Rice. Image by RON SACHS

At 10 years old, the sandy-haired, fair-skinned boy, his broken arm in a cast, seemed cherubic and unthreatening sitting among some 40 students who were listening to former secretary of state Condoleezza Rice at the Jewish Primary Day School of the Nation’s Capital on May 3.

Rice had come to speak at the school as part of JPDS’s annual Yitzhak Rabin Memorial Lecture.

Lerner, whose mother, Inna, left Moscow for the United States in 1996, and whose father, Mark, works as a lawyer for the Department of Labor, had been taught not to pull any punches.

So, amid questions for Rice about figure skating, Led Zeppelin and even growing up under Jim Crow, Lerner’s stood out. “How do you feel about the things the Obama administration has said about the ways you got information from prisoners?” he asked her.

The hard-hitting question won the fourth grader from Bethesda, Md., immediate fame. But reports that the school had asked him not to use the word “torture” drew suggestions that Lerner had been censored. The original question, “If you would work for the Obama administration, would you push for torture?” seemed much tougher.

David Zimand, the school’s director of general studies, who helped Lerner and other students formulate their questions, called the charge “mind-boggling.”

“We let him ask the question,” he said. “Misha’s not this crusading political person. He’s a quiet, shy, sweet, thoughtful little boy. And nobody put him up to this, either.”

Although the question was modified at the behest of Zimand and Naomi Reem, the school’s principal, Zimand said the decision to do so was not political —“There was no chance that Rice was going to work for Obama,” — and that Lerner was happy to rephrase it.

“I told him, ‘I really want you to have an opportunity to ask this question, but I want to make sure we ask it in a way that will give her a chance to answer and to feel respected, even if we’re pressing her,’” Zimand said. He confessed that he and his colleagues “didn’t put a ton of thought into this,” because “we didn’t even remotely think that he was going to be talking to [National Public Radio’s] Robert Siegel and on the third page of The Washington Post.

“We reframed the question together,” he related. “I said: ‘Are you comfortable with this? Is this a question you want to ask? Is it your question?’ And he said yes.”

Lerner himself appeared to confirm this, saying that the removal of the word “torture” from his query “didn’t really matter.”

Asked how he initially came up with the question, Lerner said, “Mr. Zimand came to our classroom and talked about Condoleezza Rice’s background and history, and he also mentioned that there was some controversial stuff about her, and he talked a little bit about torture.” Lerner said he also had “heard about it in the news… So I decided to do my question based on that.”

Inna Lerner, a stay-at-home mom, was surprised when her son popped the question to Rice. “He likes history and politics, and he’s very good at art. He likes physics now; I don’t know where that came from. He likes to write, and he likes to swim. He’s constantly doing research and learning — between playing computer games — and he seems to enjoy that. But I haven’t discussed torture with him,” she said. “I was surprised by the subject.”

Rice, who has come under fire recently for telling Stanford University students that waterboarding was legal because “it was authorized by the president,” didn’t seem surprised at all by Misha’s question. “One of the hardest things about being in government,” she told the students, is criticism from “people outside of government who really don’t have to deal with the daily struggles that you do and aren’t trying to solve really difficult problems. They’re just sitting out there, commenting and criticizing. I don’t think that’s really fair.

“We were all terrified of another attack on this country, but even under those most difficult circumstances, the president was not prepared to do something illegal, and I hope people understand that we were trying to protect the country.”

Lerner isn’t sure that he understands. The Bush administration used torture, he says, which “is basically like robbing someone. Like you put a gun to someone’s head and say, ‘Gimme the money,’ but you’re doing it with torture and information, not a gun and money,” the boy said. For him, Rice’s answer just wasn’t good enough. His mother agrees. “I didn’t expect anything else,” she said.