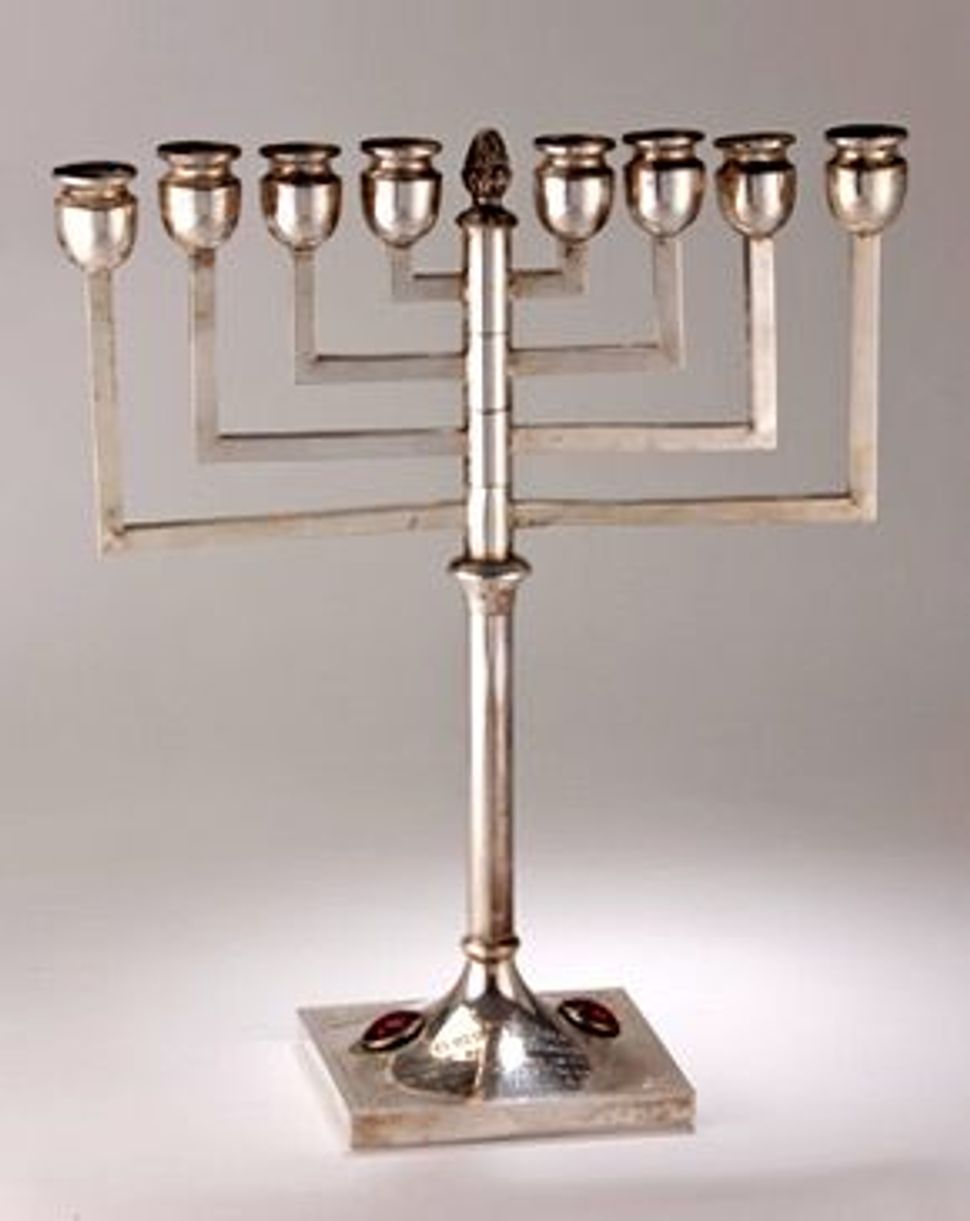 Yes You Can: Own Sammy Davis Jr.?s menorah for $15,000. Image by Courtesy Of Jonathan Greenstein

If you want to buy Sammy Davis Jr.’s menorah when goes up for auction next month, it will cost you a bit more than a song.

The bidding will start at $10,000, and Brooklyn-based auctioneer Jonathan Greenstein says the silver menorah could fetch upward of $15,000. 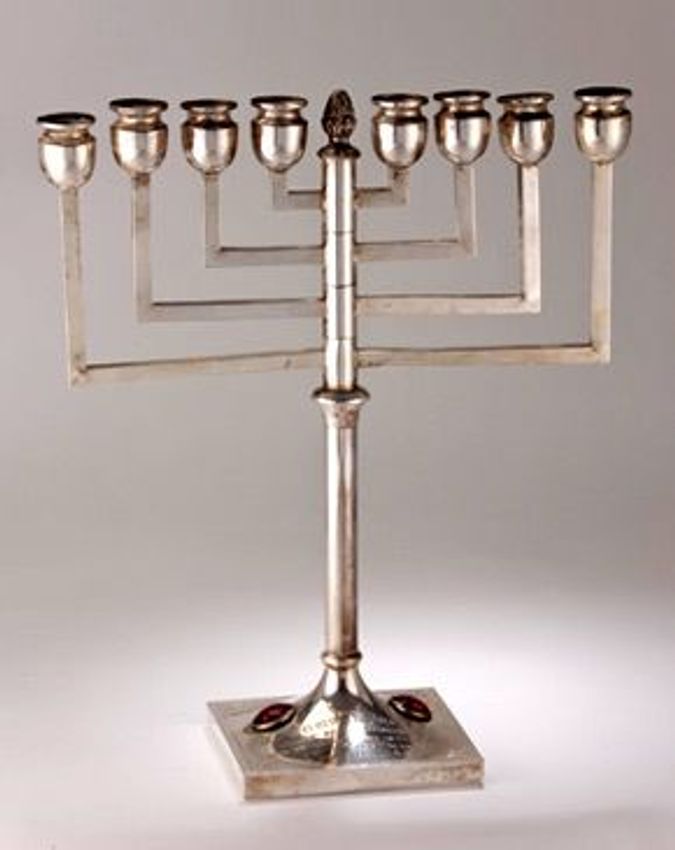 Yes You Can: Own Sammy Davis Jr.?s menorah for $15,000. Image by Courtesy Of Jonathan Greenstein

But even more than its monetary value, both as celebrity memorabilia and as a piece of Judaica, the sale of Davis’s menorah opens a priceless window onto a time a half-century ago, when the popular African-American entertainer became one of Judaism’s most high-profile converts.

Davis’s conversion was played for jokes — often by Davis himself, who seldom refused a laugh at his own expense. (Here’s a favorite, recounted in his autobiography: “What’s your golf handicap, Sammy?” “I’m a colored, one-eyed Jew — do I need anything else?”) But his spiritual journey to Judaism was, according to those who knew him well, entirely sincere.

“He was very, very serious about it,” said Burt Boyar, Davis’s friend and biographer, in a telephone interview from his home in Los Angeles. “He converted to something he believed in and felt for.”

That belief shone through when Ernest Michel met Davis in Las Vegas in the 1950s. Michel was leading the Federation of Jewish Philanthropies’ campaign in Vegas (and he remains on staff as a consultant for the merged UJA-Federation of New York).

“He told me, ‘You know, I’m Jewish.’ I don’t remember if I knew that he had converted or not, but I said, ‘Really?’” Michel recalled. “And he said, ‘I’m the only black Jew in show business.’”

At Michel’s request, Davis performed for a federation annual meeting, where he was a big hit. Later, the two men had lunch, and Davis listened intently as Michel recounted his history as a Holocaust survivor.

“He was very interested in learning more directly about the Holocaust from someone who lived through it,” Michel said. “He felt very close to the Jewish community.”

The feeling was mutual. The menorah going up for auction June 8 was a gift to Davis from the New York Federation and bears the inscription “Women’s Division Jewish Philanthropies, Tuesday, November 23, 1965, Hotel Astor. To Sammy Davis, Jr., whose achievements, won by courage and integrity, say to every man, ‘Yes, We Can.’”

(“Yes I Can” was Davis’s personal motto and the title of his 1965 autobiography, co-written with Boyar and his wife, Jane.)

Davis’s first exposure to Judaism came from Eddie Cantor (born Israel Iskowitz), comedian, singer and actor, and host of television’s “The Colgate Comedy Hour.” Davis got his big break on the show, and after one of Davis’s frenetic dance performances, Cantor hugged him and used his own handkerchief to mop Davis’s sweaty face.

That simple act of affection prompted reams of hate mail to Cantor, Davis and the show’s sponsors, Boyar said.

The show’s sponsors pressured Cantor to cut short Davis’s three-show contract. Instead, Cantor booked Davis to appear on every show for the rest of the season. Cantor also gave Davis a small, gold mezuza, which he wore around his neck for good luck, and planted a few seeds about Judaism by answering Davis’s questions about the religion.

Davis’s real spiritual awakening came after he was nearly killed in a 1954 car accident that cost him his left eye. Friends Tony Curtis (born Bernard Schwartz) and Janet Leigh rushed to the hospital as he was being wheeled into surgery, and they pressed into his hand a gold medallion inscribed with a Star of David. When Davis awoke from surgery, he found he’d clutched the medallion so tightly that the Star of David was imprinted on his palm. While recovering, he recalled in his autobiography, Davis also met a rabbi who encouraged him to pursue the little sprouts of religious faith he was feeling.

The final turning point came, ironically enough, on Christmas Day 1954. Davis had bought his mother a white Cadillac, but when he went outside to show her his gift, he found that someone had painted the garage door of his new Hollywood mansion with the message “Merry Christmas Nigger!”

Furious and heartbroken, Davis reached for a book to distract himself and opened to a random page. The book happened to be “A History of the Jews,” and the first word he saw was “justice.” According to his autobiography, Davis gave a bitter laugh, but noticed that the word kept resurfacing as he skimmed through the text. So he started reading from the beginning and was struck by, in his words, “the affinity between the Jew and the Negro.”

“For thousands of years they hung onto their beliefs, enduring the scorn, the intolerance, the abuses against them because they were ‘different,’ time and time again losing everything, but never their belief in themselves and in their right to have rights, asking nothing but for people to leave them alone, to get off their backs,” Davis wrote (with the Boyars). “I looked at the name of the man who had written the book. Abram Leon Sachar. I felt like sending him a note: ‘Abe, I know how you feel.’”

Davis’s mother was Catholic and his father was a Baptist, but he’d never connected much with either faith. He began studying Judaism in earnest, encouraged and mentored by Rabbi Max Nussbaum of the star-studded Temple Israel of Hollywood. (Nussbaum later officiated over the conversion of Elizabeth Taylor and of Davis’s Swedish-born wife, May Britt.)

Davis’s conversion to Reform Judaism did not slow down the entertainer’s hard-partying, womanizing ways. But behind his boozy, Rat Pack image, Davis did observe Judaism in his own way, Boyar said: He would not work or answer the phone on Yom Kippur, and Boyar remembers watching him light candles to celebrate Hanukkah (though he can’t recall which menorah he used).

“The only thing that made him sad is, he couldn’t go to temple very often,” Boyar said — because Davis turned heads even in the most blasé-about-celebrities Hollywood synagogue. “He didn’t want to disrupt the ceremony.”

The menorah that will go up for auction at the Radisson Martinique in New York was originally sold in an auction after Davis’s 1990 death to cover a $5 million debt he owed to the Internal Revenue Service. It was sold again in 2004, part of a mixed lot that went for $50,000 to a Judaica collector who now, like so many others, needs the cash.

The simple silver menorah with modern lines is decorated with plastic rubies and probably wouldn’t fetch more than $800 if it hadn’t belonged to Davis, Greenstein said. But of course, just as Davis was no ordinary Jew, this is no ordinary menorah.