As Layoffs Mount, Which Jewish Executives Shared the Pain? 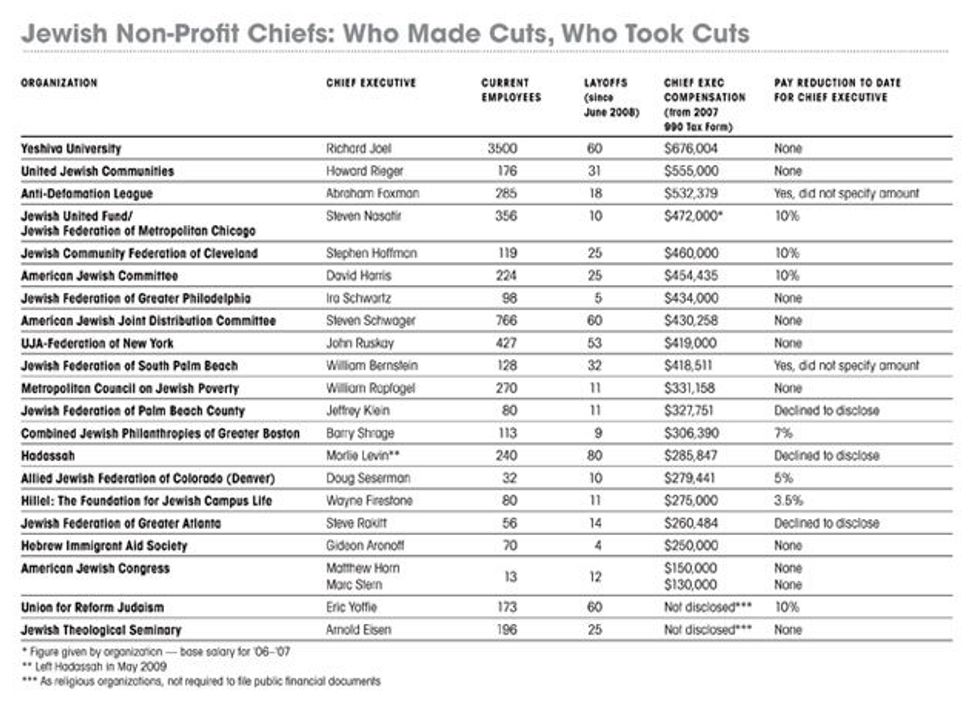 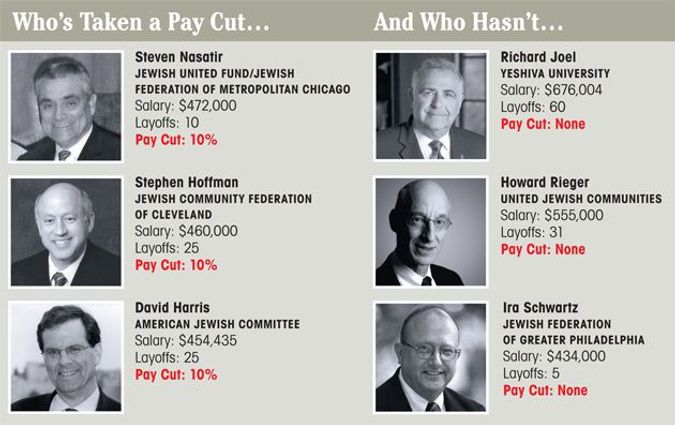 Sacrifices Shared, and Not: A Forward survey of 2006-2007 executive salaries at major Jewish organizations that reduced staff in the past year found no consistent correlation between layoffs and CEO pay cuts.

A tide of red ink is coursing through the hallways and balance sheets of Jewish charitable organizations, leaving slashed programs, reduced allocations and large staff layoffs in its wake. But in the current economic and financial meltdown, the suites of top executives have in many cases stood on high ground, beyond the reach of the crimson lapping below.

The Forward surveyed 21 of the largest and most prominent Jewish organizations that have implemented layoffs over the past year in response to the economic downturn. Of those, only nine top executives revealed that they had taken a reduction in their own pay, and only seven were willing to specify how much of a cut they had taken. Another 10 said that they have not taken a pay cut, and three others declined to reply.

There was no consistent pattern to who had and had not taken a pay cut. Those who did, and those who did not, take salary cuts included some of the lowest and highest earners; nor was there any apparent relationship between salary cuts and the number of layoffs.

Rather, based on a series of interviews, the dividing line appeared to be philosophical rather than numerical. Those who did take pay cuts emphasized that they thought it was an important step to show leadership, or, as a number of executives put it, to share the pain.

“I just think it’s fair,” said Barry Shrage, president of the Combined Jewish Philanthropies of Greater Boston, who took pay cuts and furloughs totaling 7% of his salary, which in 2006-07 was $306,390. “People are looking to those who are supposed to be leaders to do their share.”

Shrage recently laid off nine of his 125 employees — about 7% of his staff — in response to declining revenues and endowment funds.

“It’s not that it made it easier, but I think it would have been a lot harder to accept on the part of the agencies and everybody else if we weren’t doing our share,” Shrage said of the layoffs. “I think people would have been wondering where the leadership is.”

To compile data for this survey, the Forward culled compensation information from federal IRS-990 tax forms, which charities must publish for public inspection. The figures come from 2007, the most recent year broadly available, which documents the 2006–07 tax year. The accompanying data chart includes only base salaries and excludes executive benefit packages, which can be substantial but can vary widely in category and kind, making comparisons difficult.

(In the interest of full disclosure, the Forward Association, which publishes this newspaper, has laid off one full-time and two part-time employees over the past year, leaving 39 full-time and four part-time staffers. Top earners at the Forward are taking pay cuts of 10% of all earnings in excess of $80,000. In 2007, the Forward’s publisher, Sam Norich, earned $211,046 in base pay.)

In the private sector, executive compensation has become a hot-button political issue, as CEOs have been excoriated for earning eight-figure salaries and more while leading their companies into ruin. Executive salaries at not-for-profits never reached such heights, but with dollars for Jewish causes scarce, they are now an obvious target for scrutiny. They are also readily available in published tax forms, making them one of the most tangible expenses that critics can point to as signs of excess.

Thus, a number of executives described cuts to their own salaries as a way to send a signal to their organizations, and to donors, that they are fully taking part in the pain of the economic downturn.

“We have subscribed to the philosophy that we all have skin in this game,” said William Bernstein, president and CEO of the Jewish Federation of South Palm Beach County. Bernstein, whose donors were hard-hit by the Bernard Madoff scandal, laid off 32 out of 160 staff members and slashed his organization’s operating budget by 25%. He said that he had taken a reduction in his salary, which in 2006–07 was $418,511, but declined to specify the amount. “If the agencies we support had to take significant cuts, if the people who are our recipients were seeing cutbacks in service and our donors themselves were having significant problems in their lives managing their own personal finances, it seemed hard for us, even those of us who had contracts, to feel that we could continue to be compensated at levels that were decided upon pre-recession.”

In other cases, the pay cuts were part of a more targeted financial strategy. The Union for Reform Judaism laid off 60 employees — roughly a quarter of its staff — as part of a restructuring and cost-saving measure. At the same time, the top-paid 10% of staffers took pay cuts of 7% to 10% to help pay for raises to the lowest-earning employees, designed to offset a rise in insurance premiums.

“It’s an ethical issue,” said Rabbi Daniel Freelander, the URJ’s senior vice president and chief operating officer, explaining that the organization decided that the top earners could better afford the cost of higher premiums than the lowest-paid staff.

URJ disclosed its executive salary cuts in percentage terms in response to a Forward query. But as a religious organization, it does not have to publish its financial information and does not disclose the salaries of top executives.

Not all executives agreed that it is a good thing for executives to take pay cuts as a way of sending a message.

“I think sometimes people are making those decisions for not the right reason, because it appears to be the right thing to do from a political perspective,” said Howard Rieger, president and CEO of United Jewish Communities, the national umbrella organization of federations. Rieger made $555,000 in the 2006–07 tax year, and also received $150,000 in expenses to offset the high cost of living in New York. His organization has cut 31 staff positions over the past year. Rieger, who moved to New York from Pittsburgh in 2004 to take his job, added that in a competitive marketplace for management talent, not-for-profits needed to weigh the urge to cut salaries for the sake of appearances against the need to pay enough to retain top-flight employees.

A UJC official told the Forward that Rieger, who has taken a salary freeze, was considering taking a pay reduction but had not yet done so. Rieger will step down from his UJC position at the end of August.

The UJA-Federation of New York laid off 12.5% of it staff — 52 employees — March 11, leaving it with a total of 427 staffers. But the senior executives, including executive vice president and CEO John Ruskay, maintained their salaries at the previous year’s level. When the Forward inquired about this, board chair Jerry Levin responded that senior executives “are working harder than ever, due to reduction in force. It would not be appropriate for them to have any sort of salary reduction.”

Rieger and Ruskay are not the only high earners who have not taken a pay cut. Yeshiva University’s president, Richard Joel, who earned $676,004 in 2006–07, has taken a pay freeze but no cut, while the school laid off 60 staffers over the past year. Through a university representative, he declined to comment.

Ira Schwartz, president and CEO of the Jewish Federation of Greater Philadelphia, explained that a recent layoff of five people came as part of a broader, multi-year effort to streamline the federation, rather than in response to the economic downturn. Schwartz, who made $434,000 in 2006–07, has, like all other staff members at his organization, taken a salary freeze but no pay cut.

In other cases, top executives have simply viewed their own salaries as one of many expenses that the organization could consider cutting — and not necessarily the first option.

“We considered all of the approaches and decided that the best way to do it — to leave things as much as possible the way they were before the economic downturn — was this scalpel-like cutting,” said Gideon Aronoff, president and CEO of the Hebrew Immigrant Aid Society. Aronoff, who earned $250,000 in 2007, laid off four of his organization’s 70 employees, in addition to implementing various other cuts in expenses.

Aronoff added that salary reductions for himself and other senior managers were “on the table” when the final budget numbers came in, but that the numbers worked out in a way that made salary cuts unnecessary. Aronoff did participate in an organization-wide giveback of four vacation days for all employees.

Some executives said they have found ways other than salary reductions to contribute to their organizations in difficult times. After the Metropolitan Council on Jewish Poverty laid off 21 employees last summer in a round of cuts, senior executives decided to donate money to a fundraising drive started by the board to raise money for the organization. In all, eight staffers contributed a total of around $70,000, and as a result of the effort, the organization was able to rehire 10 of the dismissed employees.

At the American Jewish Joint Distribution Committee, executive vice president and CEO Steven Schwager likewise pointed to an ongoing fundraising drive among senior staff at the organization, which last year raised $107,000, as an example of the way that he and other top executives give back to JDC. Schwager, who earned $430,258 in 2007, and who laid off 60 employees last summer, did not take a pay cut.

In other cases, layoffs have come amid broader organizational turmoil. The American Jewish Congress saw almost 90% of its endowment wiped out in the Madoff scandal. The organization promptly laid off 12 of its 25 employees. Those doing the layoffs, Marc Stern and Matthew Horn, had been named co-executive directors of the organization just two months prior to the Madoff scandal breaking, while continuing to carry out their previous jobs of general counsel ($130,000) and national policy director ($150,000), respectively, without raises. They did not take pay cuts.

Meanwhile, a few groups implemented broad salary cuts not to set a symbolic example in the face of layoffs, but as a strategy for avoiding layoffs altogether. American Jewish University in Los Angeles implemented salary cuts across the entire staff to avoid having to lay off anyone in response to the economic turmoil.

But Doug Seserman, president and CEO of the Allied Jewish Federation of Colorado, warned against seeing broad salary cuts as a panacea, especially when some layoffs are inevitable. “At times like this, it’s hard enough to lay people off, but the people who are remaining, you’re asking them in many cases to work harder, work longer,” he said. “The last thing I want to do is pay them less for the hard work that they’re doing.” Yet Seserman himself, who laid off nearly a quarter of his federation staff, took a 5% cut in his salary, which had been $279,411 in 2006–07.

Ultimately, executives noted, there is only so much that one can do for morale in a time of financial catastrophe.

“I think for the people who were laid off, nothing helps the pain,” Shrage said. “You have families to feed, and it’s horrible.”

To read this week’s editorial on this subject, click here.

As Layoffs Mount, Which Jewish Executives Shared the Pain?