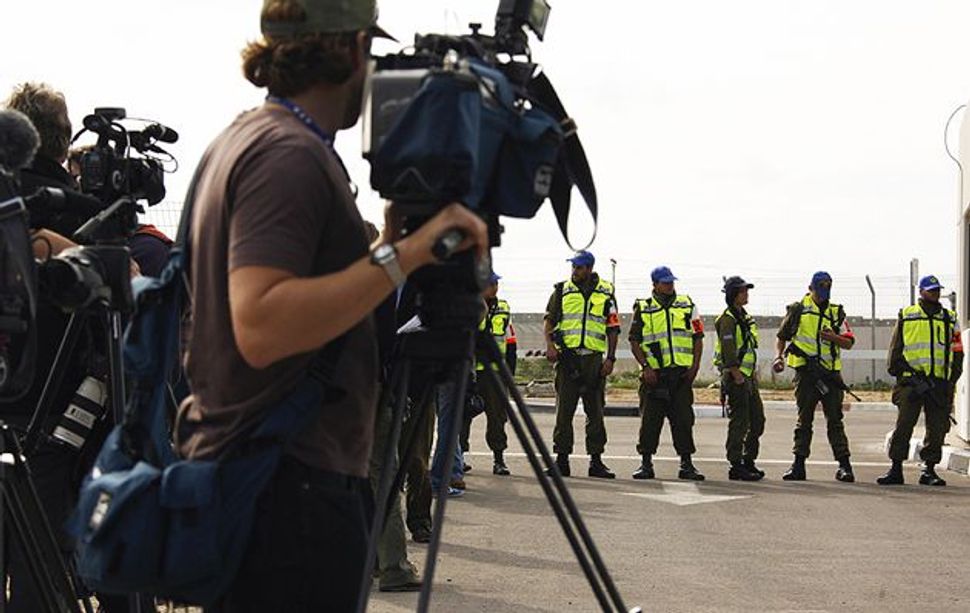 Journalists on The Front Line: The Israeli government?s decision to keep journalists out of Gaza during the conflict earlier this year has become a flash point in a fight between journalist unions. Image by getty images

The expulsion of an Israeli journalists’ union from the International Federation of Journalists is mired in a murky cocktail of politics and money.

The Israeli group –— the National Federation of Israel Journalists — was ousted June 7 in a unanimous vote of the international union’s executive committee. The vote immediately raised the specter of another effort by international unions to boycott Israel for political reasons; recently, a number of academic unions around the world have voted to boycott Israeli professors.

In this case, Aidan White, general secretary of the international journalist union, told the Forward that the decision was purely financial, pointing to the fact that the Israeli union has not paid membership dues in four years.

But the dispute has a distinctly political edge to it, because of the international union’s criticism of the Israeli government. After the recent conflict in Gaza, for instance, the international union published a report criticizing the Israeli government for endangering journalists and keeping them out of Gaza. The report pointed to the number of journalists who were injured or killed during the conflict.

Haim Shibi, a member of the Israeli union’s board of directors, said that the report was an unfair attack on the Israeli government.

“I’m not expecting anyone to sing songs of praise, but I expect fairness,” he said. “If I see a precooked report, I recognize this.”

“The relationship is getting sour because of politics, not because of money,” Shibi told the Forward.

“Many of our unions would like to pay less fees,” White said. “If we bow to this intransigent position… it seems to me it would make our position untenable with our other members.”

A June 19 letter to the Israeli organization outlined the international union’s position: After a year of unsuccessfully trying to negotiate a payment plan for the piled-up arrears, the Israelis were being expelled.

Shibi acknowledged that his union was facing financial difficulties, but he said that the financial hesitation from the Israeli side also arose out of a sense that the international union had treated the Israeli government unfairly.

“When we are expected to automatically pay for anti-Israel campaigns, we don’t see why we should pay for this pleasure,” he said.

Though the Israelis have the opportunity to appeal the international union’s decision at the group’s next major meeting, to be held in Spain in May 2010, Shibi said his group will not be pursue that option.