Ritual By (Re) Design 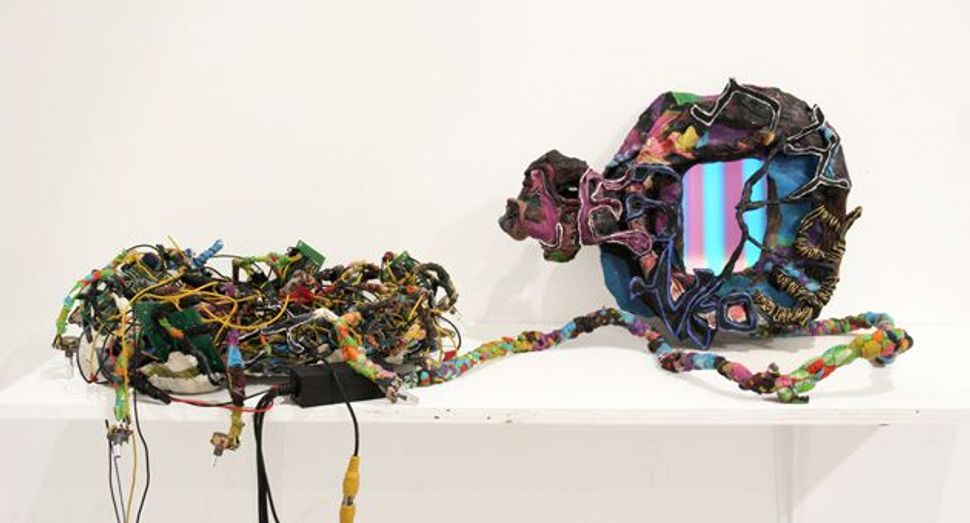 Twenty-first Century Tefillin: LoVid (Tali Hinkis and Kyle Lapidus) reminds us that the iPhone generation needs phylacteries too. Image by The Jewish Museum

Artists are the new rabbis.

Since at least the destruction of the Second Temple exile, adaptation and cultural syncretism have been the hallmarks of Jewish practice. History dictates that rituals, customs and habits are lost, forgotten and changed over time or are remembered only in absences. What remains is a scant trace of the diversity of what has been.

People these days gather not at synagogues (from the Greek for a “gathering place”) but at galleries, wine bars and stores. And given the generally stultifying effects of denominational orthodoxy, those who are exploring the possibilities of practice with creativity — putting the mull into a multi-media Rosh Hashanah with The Sway Machinery at San Francisco’s Temple Emanu-El, or the holy into the HigHolidays 5770 event at City Winery with Storahtelling in New York — are artists.

Reinventing Ritual, the exhilarating new exhibition at New York’s Jewish Museum, attempts to display recent and contemporary objects designed by artists rethinking both the design of the objects and the significance of the rituals, customs and practices for which they were created. From videos of sukkahs to actual Seder plates, from Purim gifts for the poor to mezuzot, and from tallit-aprons to cup-of-tea wedding rings, the range of objects considered is exceptionally broad.

The task of selection is taxing: What should be included because of its consumer aesthetic (Karim Rashid’s “Menorahmorph”) and what should be included because it’s a good idea despite its production (LoVid’s “Retzuot (Shin Shin Agam)” — video tefillin)? For the Jewish Museum, God may be a verb pace Rabbi David Cooper, but ritual is divisible (if not exhaustively) into four gerunds that title the exhibition sections: “Absorbing,” “Covering,” “Building,” “Thinking.”

In each of these categories, curator Daniel Belasco has found provocative artifacts; although, for understandable reasons, “Thinking” is unfortunately shoehorned in. Jewish thought, with concomitant disputation, is an age-old practice, but it’s not really a ritual, and it’s certainly not demonstrated through the display of objects. When Suzanne Treister’s “ALCHEMY/The Independent” deploys a traditional kabbalistic diagram to show the subjects of daily newspapers “reframing the world as a place animated by strange forces, powers, and belief systems,” it’s a plausible meditation on (or perhaps just a capitulation to) the pervasiveness of occult conspiracy theories, but it has little or no bearing on any Jewish ritual or way of thinking.

But it would be churlish to dwell on the marginal when there is so much of central importance here. Gendered absences are questioned quite beautifully in “Hevruta-Mituta” — the exhibition’s poster art of miniature skullcaps knitted by women and positioned as pieces on a chess board — and by Hadassa Goldvicht’s video, “Writing Lesson #1.” Revisiting the tradition in her own Hasidic community as she grew up, a community where young boys lick honey off books on the first day of school to represent the sweetness of reading and study, Goldvicht videotapes herself licking an aleph-bet of honey-written letters off the back of a translucent board. The tangible letters, the sensuous licking of them and the verging into sensuality as Goldvicht leans into the camera with her tongue sticking out show what the promise of honeyed letters can mean; show how she appreciates the sweetness the kindergartners are supposed to experience, and shows what, in submitting to book study alone, we all might miss.

Conducive to both display and gerundive description, however, are coverings. Beyond the merely functional, clothes are markers of identity and occasion. Combining two different contexts, we end up with “Frontier Vest,” Azra Aksamiya’s combination of tzitzit and bulletproof jackets; “Fringed Garment,” one of Rachel Kanter’s apron taleisim, or the ubiquitous Dan Sieradski’s “Tallit Katan Shel Shabbatai Tzvi” — a tallis made from a kaffiyeh. Taken especially in the context of the internal schisms and external politics that mark contemporary Jewish communal and religious life, these are timely reminders of what’s at stake in the everyday.

And this is the beauty of the exhibition. The objects, and the “curatorial activism” that informs their choice (to quote Belasco), reveal and maintain regular rituals, but by highlighting overlooked parts of the (sometimes unintentional) symbology, they also change those rituals. Vanessa Ochs’s book “Inventing Jewish Ritual” (Jewish Publication Society, 2007) — one of the inspirations for this exhibit — talks about the hybridity and acculturation that informs much of contemporary innovation: Hanukkah presents and yoga davening. Reinventing Ritual, on the other hand, takes for its renewal either the material design and technology or Jewish insight from historical or contemporary examples.

Material culture makes belief and practice concrete. The two-part chrome wedding goblet that fastens together to make one working cup embodies the union of two people that the wedding ceremony calls for and discusses. A wholesale revisiting of baal tashchit (the principle of abhorring waste) instead of the now hollow cliché of tikkun olam is noted in the recycled Seder plates and the hugely impressive Jewish Reconstructionist Congregation in Evanston, Ill. — LEED Platinum compliant (the first synagogue to win this highest credential for green building construction) and with sustainable and ethical architecture — imaginatively evoked here.

The Seder plates — old designs covered with a six-section stencil and re-fired — use the kitsch aesthetic to validate the reuse of discarded plates. While the exhibition generally begs the question of where kitsch ends and where art begins (and the associated question of which objects more properly belong in the shop rather than the gallery), it is successful in sidestepping its import. These objects continue rituals while simultaneously asking questions of them.

As is the case for most design innovation or art, many of these objects will be long lost in a century. But sustaining a ritual while breathing new or once forgotten life into it will have written that particular ritual, and the people who practice it, into the book of life for a few more years.

Reinventing Ritual will be at The Jewish Museum in New York, September 13 until February 7.

Dan Friedman is the Forward’s Arts and Culture editor.

Ritual By (Re) Design