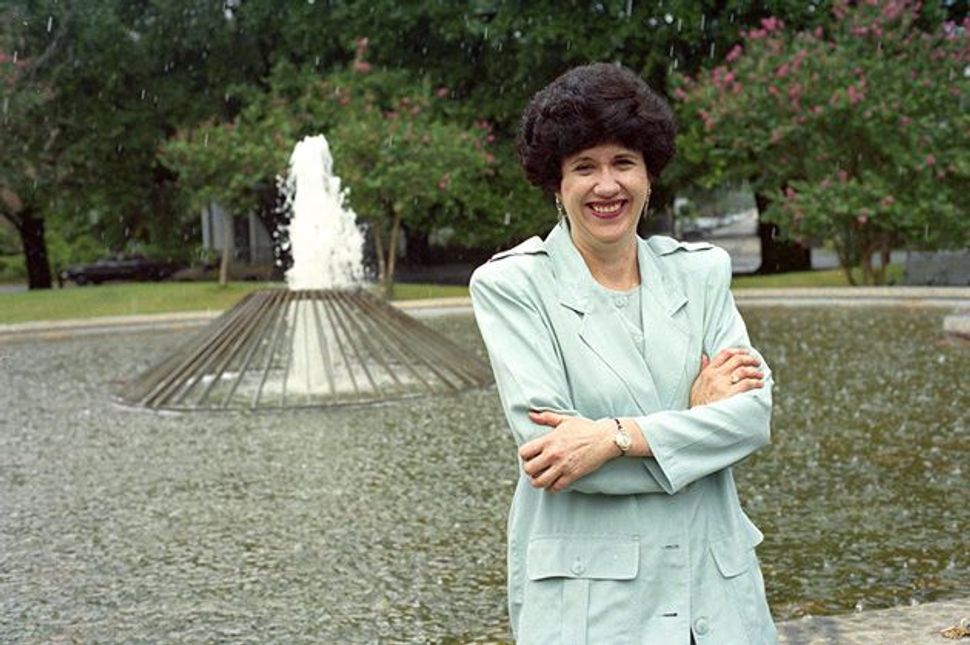 Fought Hatred: Elizabeth Rickey spent her own wealth on causes she championed. Image by Bryan Bertaux courtesy of the new orleans times picayune

One of the perks of fighting antisemitism for a living is the occasional opportunity to meet a genuine hero. On September 12, one of those heroes — a largely unsung one — died at age 53 alone in a motel room in Santa Fe, N.M., after a long battle with Crohn’s disease that had left her destitute.

No one I ever met was braver or more committed to fighting hatred than Elizabeth “Beth” Rickey, the person who, more than anyone else, was responsible for the demise of David Duke, the former Ku Klux Klan member almost elected to statewide office in Louisiana in the early 1990s.

A Southern white conservative from proper patrician stock, Rickey was an unlikely figure to take to the frontline in the battle against Duke. Yet she spent down her own wealth to do so.

Rickey had grown up a staunch Republican in Louisiana, proud of her father’s World War II service and her uncle Branch Rickey’s signing of Jackie Robinson to the Brooklyn Dodgers. She worked on Ronald Reagan’s campaigns and was a rising star in Louisiana politics, having won election to the Louisiana Republican State Central Committee.

In 1989, when Duke was elected to the Louisiana House of Representatives as a Republican, Rickey looked instinctively to her colleagues on the Republican State Central Committee to censure and disavow him. Their failure to do so — and the actual embrace in which some of them enveloped Duke — transformed her life.

Duke said he had left his white-sheet days behind him, and masses of people seemed willing to believe it, as he skillfully repackaged his racist ideas in the language of Reaganite conservatism. Not Rickey.

She followed Duke to a meeting of the Populist Party in Chicago, where Duke shook hands with Art Jones, a leading American Nazi, and told a collection of skinheads, neo-Nazis and Klansmen that he had won his state House seat “for you.” Rickey leaked the story to the press, and when Duke denied knowing Jones, she had proof to the contrary.

She sent a friend to Duke’s legislative office who found Holocaust-denying books, the Hitler enthusiast’s edition of “Mein Kampf” and other racist ware.

With increasing vehemence, Rickey called on her Republican colleagues to disavow Duke. Fearful and needing the populist following Duke commanded, the committee declined. As she persisted, many good friends slowly backed away from her.

Oddly, Duke tried to convert Rickey. He took her to lunch, called her regularly, and tried to convince her of the “truth” about blacks and especially Jews. At one lunch, he told her that the Holocaust was a myth, Auschwitz was a rubber factory, Nazi Rudolf Hess deserved the Nobel Peace Prize and Dr. Josef Mengele was a scientific genius. Thinking of her father’s World War II service, she left, feeling ill.

Rickey took careful notes of her conversations and recorded the phone calls, and eventually released it all to the media. Death threats followed, but she would not be deterred.

When Duke announced his run for the U.S. Senate, Rickey co-founded the Louisiana Coalition Against Racism and Nazism. Upset that the media were ill-prepared to confront Duke, Rickey and her group put together a media resource packet. Now, when Duke gave his stock answers portraying Nazism as part of his distant past, the media were ready to expose him with his own racist, eugenic-based and contemporary pro-Nazi words.

Duke lost that election and, with the continued hard work of Rickey’s group, the governor’s race the following year. In 2002 he was convicted of mail fraud and tax evasion, having spent supporters’ funds at casinos. But in the early 1990s, there was real reason to fear that a telegenic, articulate neo-Nazi could be the chief executive of a state, or one of 100 U.S senators, and that he would use either platform to sell hatred and bigotry as noble or, even worse, unremarkable.

In 1991, after being nominated by the American Jewish Committee, Rickey won the Cavallo Foundation Award, which recognizes whistleblowers “whose actions of moral courage benefit society despite personal risk.”

The AJC bought her Duke papers last year. Today, the edition of “Mein Kampf” she brought from Duke’s legislative office sits on my desk, reminding me of the global dangers of hateful ideas and of the difference one person can make combating them and their proponents.

Kenneth Stern is the American Jewish Committee’s director on antisemitism and extremism.