From Outsider to Establishment, Then Back to His Roots 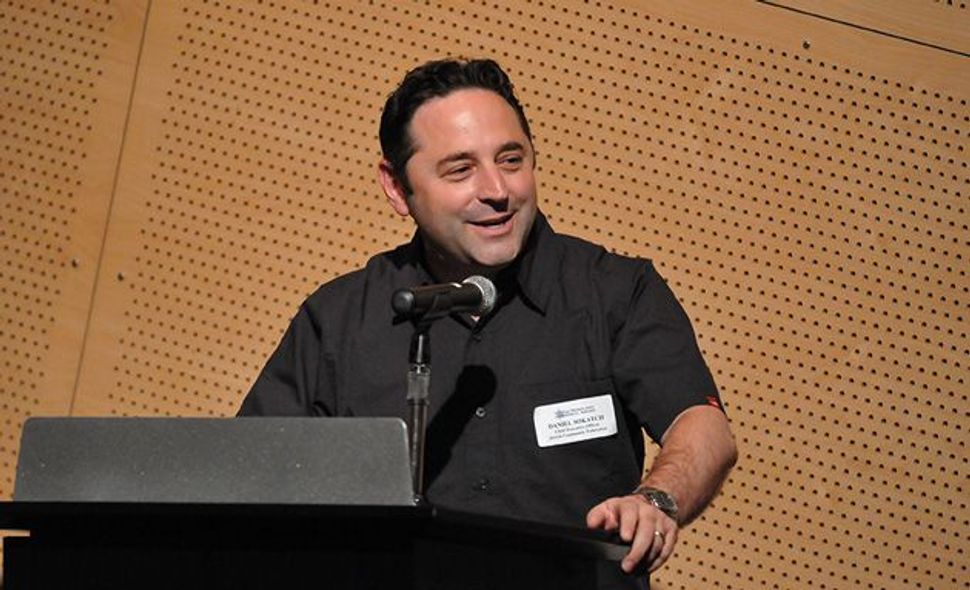 When Daniel Sokatch was tapped last year to lead San Francisco’s Jewish Community Federation, he was heralded as a breath of fresh air in a federation world struggling to re-establish its relevance. Having made his name as the founder of the liberal Los Angeles-based Progressive Jewish Alliance, Sokatch was widely seen as a bold — if somewhat risky — pick to head a consensus-driven, establishment federation.

Now, after only 14 months as CEO of San Francisco’s federation, he is heading back to his left-wing roots. On September 16, he was named the new CEO of the New Israel Fund, which supports causes in Israel relating to poverty, the environment, religious pluralism, and gender and ethnic equality. And he is leaving the federation, which has struggled in recent years to retain leaders, once again in search of a new chief.

In his first interview after the announcement that he was taking the New Israel Fund position, the 41-year-old Sokatch told the Forward that his move was a matter of following his own personal and professional dreams. Sokatch said that although he regrets leaving the federation so soon after he was hired, he believes the federation will find someone better suited to leading the changes that it needs now.

As the Progressive Jewish Alliance’s first executive director, Sokatch had managed to engage the young Jewish demographic that many federations are struggling, and often failing, to attract. Under Sokatch’s leadership, the PJA grew from 250 members at its founding in 1999 to more than 4,000 today and established itself as a major presence on the Los Angeles activist scene. Many hoped Sokatch would bring the same success to San Francisco’s federation.

San Francisco federation officials said there are no hard feelings about Sokatch’s departure after only 14 months in the job.

“Daniel has always been really passionate about his commitment to Israel, so we totally understand that he’s taking this opportunity,” said Richard Miles, senior director of marketing for the San Francisco federation.

Sokatch will be the second short-term, high-profile CEO in a row for the San Francisco federation. He succeeded Thomas Dine, the former executive director of the American Israel Public Affairs Committee, who resigned after 20 months at the federation, saying he didn’t think the job was a good fit for him.

In his brief tenure, Sokatch had to grapple with the global economic collapse, which struck a few months into his leadership. The financial meltdown required Sokatch, and every federation, to refocus on core needs at a time when donations were drying up and demand for services was increasing.

Sokatch acknowledged struggling with the daily and hourly management frustrations of running a massive, traditional, consensus-based organization like the federation, especially coming from a background of leading a smaller, nimbler, grass-roots advocacy group.

Sokatch ran into his first big controversy about a year into his job in San Francisco, as he and the federation became embroiled in the bitter debate over the screening of “Rachel” at the San Francisco Jewish Film Festival. The movie documents the death of 23-year-old Rachel Corrie, an American activist who was crushed by an Israel Defense Forces bulldozer while protesting the destruction of Palestinian houses in Rafah.

San Francisco’s federation provides funding for the film festival, and Sokatch defended the showing of “Rachel,” while criticizing the initial decision to invite Rachel’s mother, Cindy, as the sole speaker at the screening. (A second, pro-Israel speaker was hastily added to the program.) Though the federation was just one of many funders of the festival, it and Sokatch quickly became a focal point for community members who felt the showing of “Rachel” went beyond the pale for a Jewish film festival. Several major federation donors publicly declared that they would no longer give money to the federation as a result.

Sokatch cites the polarized state of debate over Israel as part of his motivation for taking the job with the New Israel Fund. One of his main goals, he said, will be building a bridge between young, liberal Jews and Israel, a task he feels that Jewish communal organizations have so far failed to achieve.

“I don’t believe that we as an American Jewish community have given young Jews a toolbox with the tools they need to build a positive relationship with Israel during complicated times,” Sokatch said.

The New Israel Fund’s focus on human rights and social justice, he said, is the best hope for making that connection. “We have an American Jewish community that wants to see and be part of an Israel that reflects the highest ideals of Judaism as well as the highest ideals of Western democracy … I really, truly felt called to go do this.”

From Outsider to Establishment, Then Back to His Roots