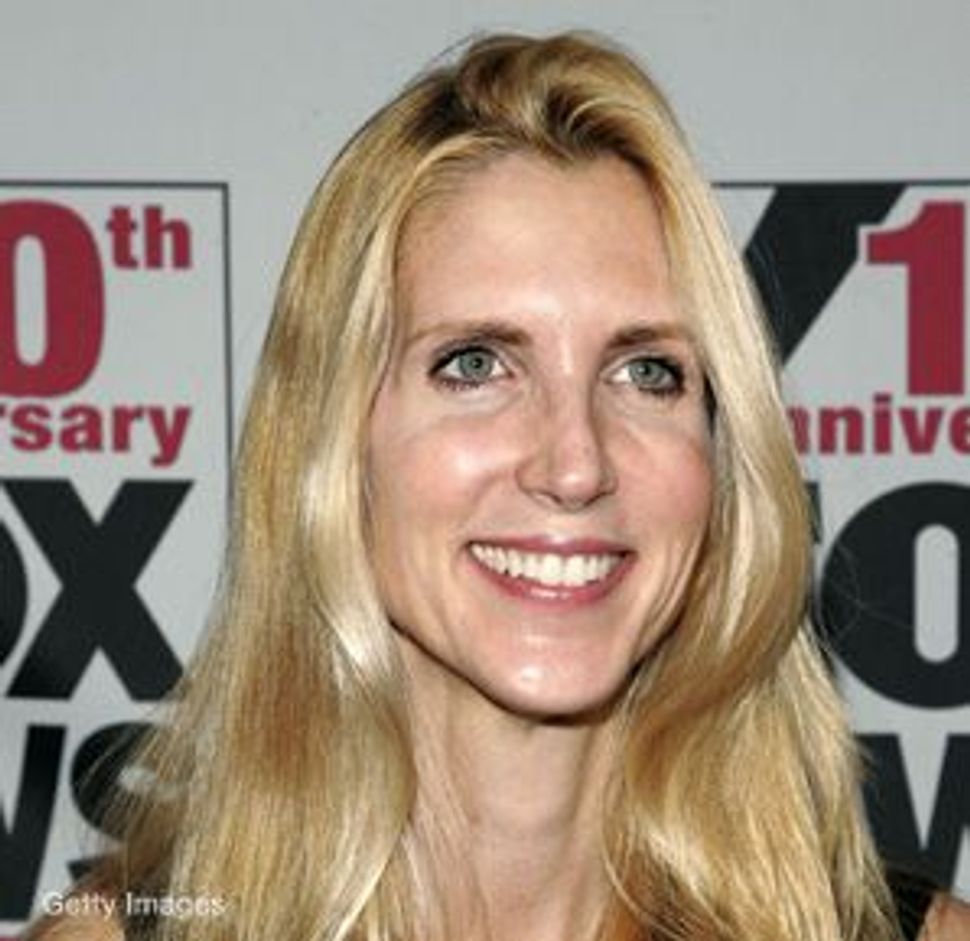 Right-wing pundit Ann Coulter ignited a firestorm last week, and she did it with a single word. 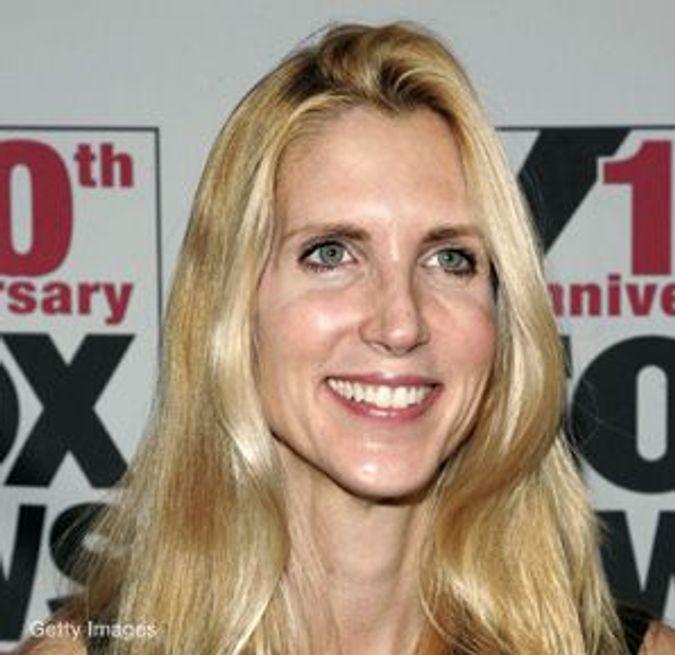 In an October 8 appearance on CNBC’s “The Big Idea” with host Donny Deutsch, the ever-provocative Coulter said that what Christians ultimately want is for Jews to be “perfected” into Christians.

“That,” she said, “is what Christianity is. We believe the Old Testament, but ours is more like Federal Express.”

“Wow,” an incredulous Deutsch replied, “you didn’t really say that, did you?”

Reactions from the Jewish world were swift. The Anti-Defamation League said Coulter’s comments were “a throwback to the centuries-old teaching of contempt for Jews and Judaism.” The American Jewish Committee called the remarks “hateful,” and the National Jewish Democratic Council launched an online petition calling on all the major television news networks to stop using her as a commentator.

The debate that ensued essentially recapitulated any of a number of episodes Coulter, a recreational offender, has provoked over the last decade: Her usual detractors called for her head; her traditional defenders dismissed the affair as just another left-wing witch hunt and a third group wrote (at length) about how they weren’t going to take Coulter’s bait anymore.

Largely absent from the discussion, however, was any real examination of her remarks’ theological significance. What exactly did Coulter mean by “perfection”? In voicing a desire for the conversion of the Jews, is she alone? And is the desire that Jews convert to Christianity by definition synonymous with antisemitism?

While Coulter’s choice of words is not much in vogue today, her language is far from new. The New Testament’s “Epistle to the Hebrews,” traditionally attributed to the Apostle Paul, essentially argues that because Jesus offered a “superior” alternative to the Hebrew Bible’s angels, prophets and priests, Christianity represents a superior, indeed “perfected,” alternative to Judaism. “Having been perfected,” the text reads (Hebrews 5:9), “[Jesus] became the author of eternal salvation to all who obey him.”

The notion that God’s covenant with Christians came to replace his covenant with Jews — a concept known as supersessionism, or replacement theology — informed centuries of Christian thought. It was a central idea for both the early church fathers and the leaders of the Reformation. It was also embraced, and expanded upon, by the German Idealist philosophers of the late-18th and early-19th centuries.

In the decades after the Holocaust, however, as Christian denominations were forced to rethink the nature of Christian-Jewish ties, many reconsidered, and ultimately repudiated, the concept. In 1988, the Episcopal Church endorsed a new set of guidelines governing Christian-Jewish relations. Supersessionism’s repercussions, the guidelines read, had been “fateful.” Rather than being a “fossilized religion of legalism,” as the Judaism of Jesus’ time was long thought to be, the church’s revised position held that “Judaism in the time of Jesus was in but an early stage of its long life.”

But not all Christian denominations have followed the Episcopal Church’s lead.

“The larger, older denominations have either gone that way or are moving that way,” said Edith Blumhofer, director the Institute for the Study of Evangelicals at Wheaton College in Wheaton, Ill. “Where you find this other rhetoric is among independent radio ministers, televangelists and among some more conservative fundamentalist groups…. They don’t say it quite the way Coulter did in public all that much, but they believe that salvation comes only through Christ.”

But is belief in “perfection” or “completion” through Jesus tantamount to hostility to Jews?

Not at all, said Yaakov Ariel, a professor of religious studies at the University of North Carolina at Chapel Hill.

“A conservative, Jesus-oriented faith doesn’t mean, in and of itself, that people are anti-Jewish,” said Ariel, a specialist in Jewish-Evangelical ties. “Some of the more favorable attitudes toward Jews have developed in Evangelical circles, though perhaps in a way that makes some Jews uncomfortable.”

Coulter and some of her defenders, meanwhile, have argued that she has fallen victim to an unfair standard. Do not all communities ultimately want their guiding truth to become a truth shared by all? “I assume all vegans think the world would be better if everyone were a vegan,” Coulter said in a radio broadcast this week.

Asked if he thought Jews make truth claims of the sort posited by Coulter, Ariel hedged.

“The answer would be ‘yes’ and ‘no,’” he said. “On the one hand, Jews will tell you that non-Jews can be justified before God and reach eternal life just by fulfilling the Noahide laws. On the other hand, you can follow a Durkheimian understanding of religious communities. Emile Durkheim claimed that all religious communities ultimately worship themselves. There’s an element of this in the concept of the Chosen People.”

In a sense, Ariel said, Judaism, when faced with evangelism, suffers from its essential multiplicity.

“Here is Judaism,” he said, “a [numerically] vulnerable community with no one definition of what it means to be Jewish. It wants to live and let live and wants people to respect whatever faith it does or does not hold. It is then confronted by people who know exactly who they are and what they are and where they are going. This creates an uneasiness among Jews.”

And what of the argument, put forward by the ADL and others, that Coulter’s language and the thinking that undergirds it are what fueled centuries of anti-Jewish persecution?

“This is a step away from the demonization of the Jews because of the death of Christ,” Blumhofer said. “In some ways, it’s better.”

“People who don’t care about Jews don’t care about their conversion,” he said. “Enemies of the Jews in the late-19th and early-20th centuries certainly did not try to convert them. The more you know about the Other, the better the ties. Relations between Jews and Evangelicals are better today than ever before.”