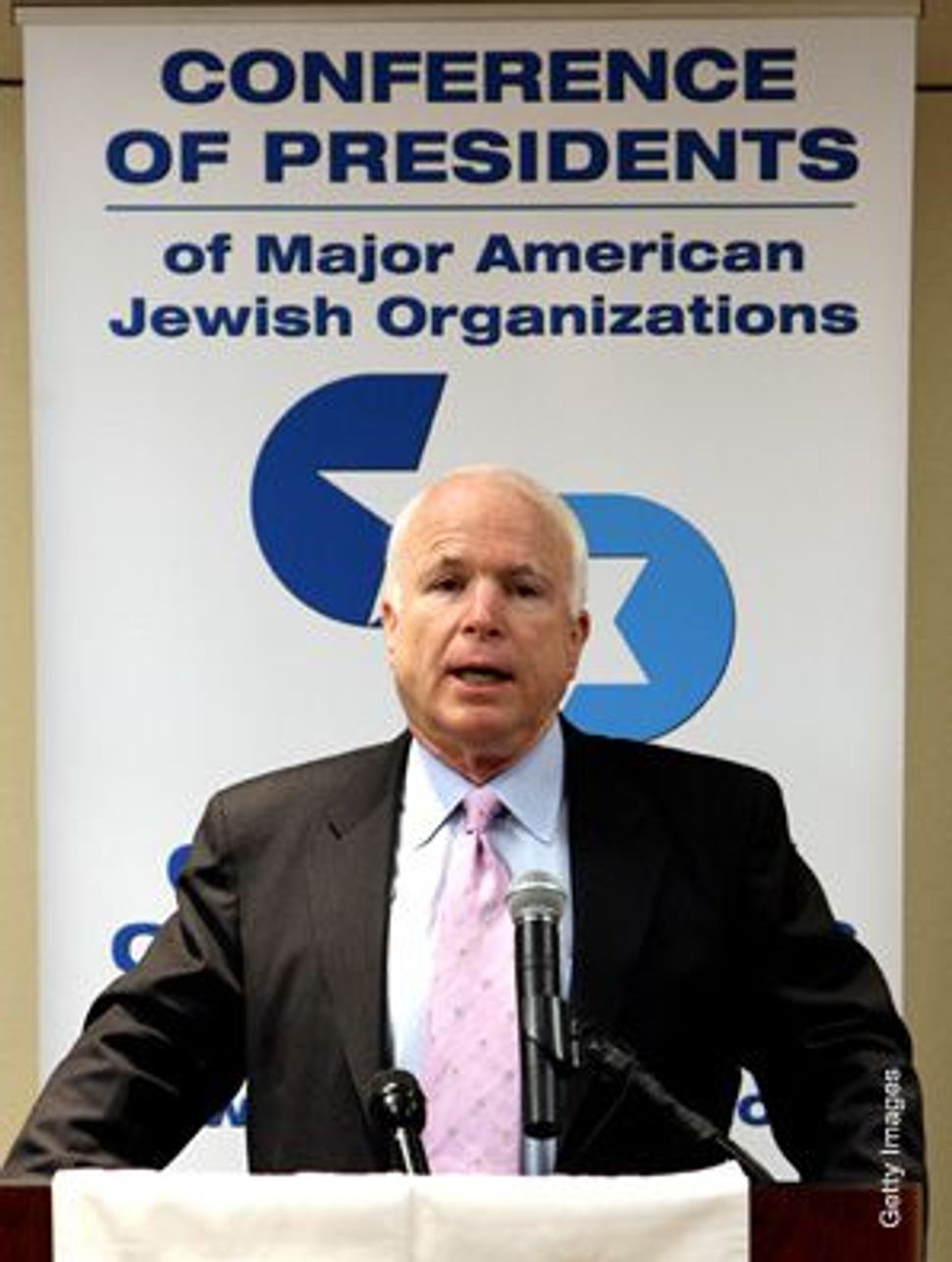 ON TOPIC: John McCain stuck with Iraq in front of Jewish communal leaders. 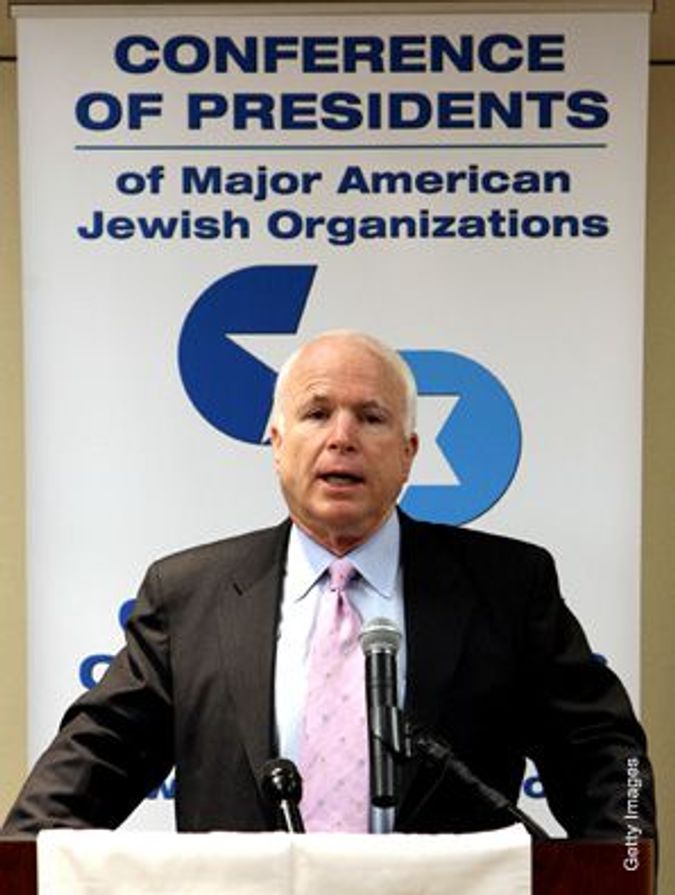 ON TOPIC: John McCain stuck with Iraq in front of Jewish communal leaders.

The United States should support a “step-by-step” peace process between the Israelis and the Palestinians, presidential hopeful John McCain told an audience of Jewish leaders Tuesday in New York.

The cautious assessment, delivered by McCain during a meeting of the Conference of Presidents of Major American Jewish Organizations, brings the Arizona senator into the company of rival Republican contenders — most notably, frontrunner Rudy Giuliani — who have sounded a skeptical note about prospects for the Bush administration’s recent efforts to jumpstart the peace process. At the same time, McCain stopped short of rejecting continued negotiations at this point, as Giuliani has done repeatedly before Jewish audiences in recent months.

“I think, obviously, we all do support a peace process,” McCain said. But “an all-encompassing, one-step solution was tried by former president Clinton, and I think that’s probably a very, very difficult accomplishment, to say the least.”

If the Arizona senator had a shot at generating new excitement among Jewish New Yorkers currently in the thrall of such hometown favorites as Hillary Clinton and Rudy Giuliani, he didn’t seem eager to throw red meat. Unlike Giuliani — who has focused his remarks before Jewish audiences on the threat of Iran and the need to protect Israel — McCain had a stump script that hewed closely to his well-worn defense of continued military operations in Iraq. One of McCain’s leading supporters in the New York area, campaign finance committee member Ben Chouake, said the Arizona senator has “great credentials” to be commander in chief, but he added that Giuliani had impressed him as the Republican candidate who had “the most sophisticated and mature” views on the peace process. “I think [McCain] is still willing to negotiate, and I don’t think he quite understands how depraved Abbas is as well as Giuliani does,” said Chouake, head of the pro-Israel political action committee NORPAC.

Many of New York’s Jewish members of the GOP would seem to agree with Chouake’s assessment: The same day McCain made this pitch to the Presidents Conference, Giuliani attended two fundraisers held by Orthodox supporters.

About 100 young Jewish professionals attended a “Chai for Hillary” event in Washington, aimed at garnering support for the Clinton presidential campaign.

Those attending the event last Wednesday were expected to pledge 18 hours of volunteer service for the campaign of New York Democratic Senator Hillary Clinton and to recruit another 18 volunteers.

The campaign also announced endorsements from 12 Jews out of 43 in both Houses of Congress.

The Washington office of the Chabad-Lubavitch Hasidic movement says it currently has nearly 500 affiliated Jewish lawmakers, congressional aides and lobbyists in its Capitol Hill club.

The Capitol Jewish Forum, an informal group of Jews involved in Washington politics, is organized by the local Chabad-Lubavitch chapter. The forum was founded 14 years ago, with only 10 members, in order to provide Jewish staff members on the Hill with a network of their own. Among the first staffers active in the forum was Ari Fleischer, who later became President Bush’s first spokesman.

“We do not proselytize; this is totally voluntary,” Shemtov said, adding that the bipartisan nature of the forum is “a rare oasis of apolitical activity” on the highly divided political scene of Capitol Hill.

Members of the Capitol Jewish Forum are invited to attend events on Jewish holidays, such as the Sukkah on the Hill and the forum’s Hanukkah party and pre-Passover model Seder. They are also able to take part in year-round Torah lessons.