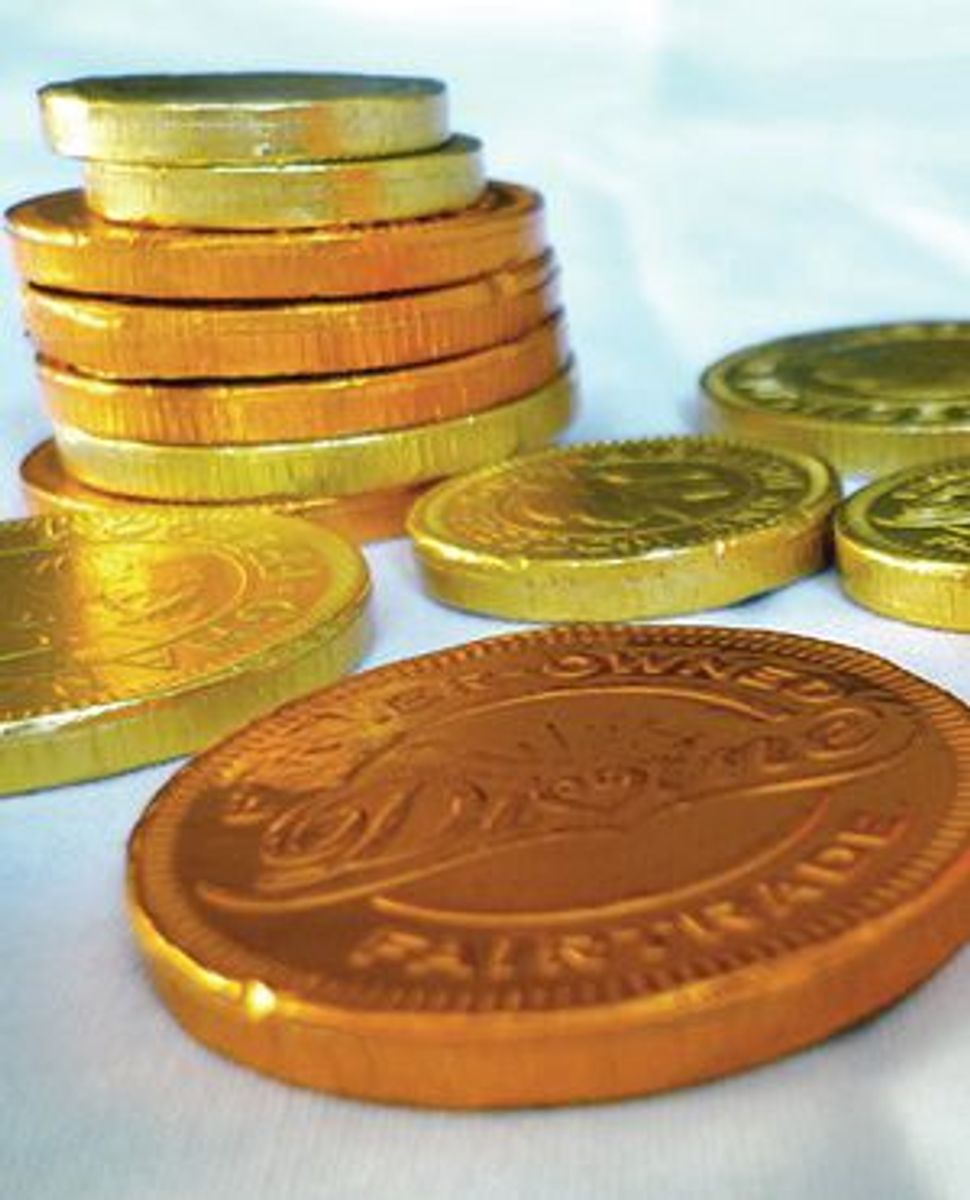 Image by COURTESY OF LEAH KOENIG

While potato latkes, with their glamorous sheen of oil and salt-kissed crunch, may be the star of Hanukkah cuisine, it is hard to imagine celebrating The Festival of Lights without chocolate gelt. Mesh pouches of the glinting, foil-wrapped discs have become a central part of grocery store holiday displays and a mandatory nibble at Hanukkah parties. But for all its current ubiquity, chocolate gelt is a surprisingly recent addition to Hanukkah. And a peek into gelt’s history reveals as much about the way American Jews celebrate the winter holiday as the sweet treat itself. 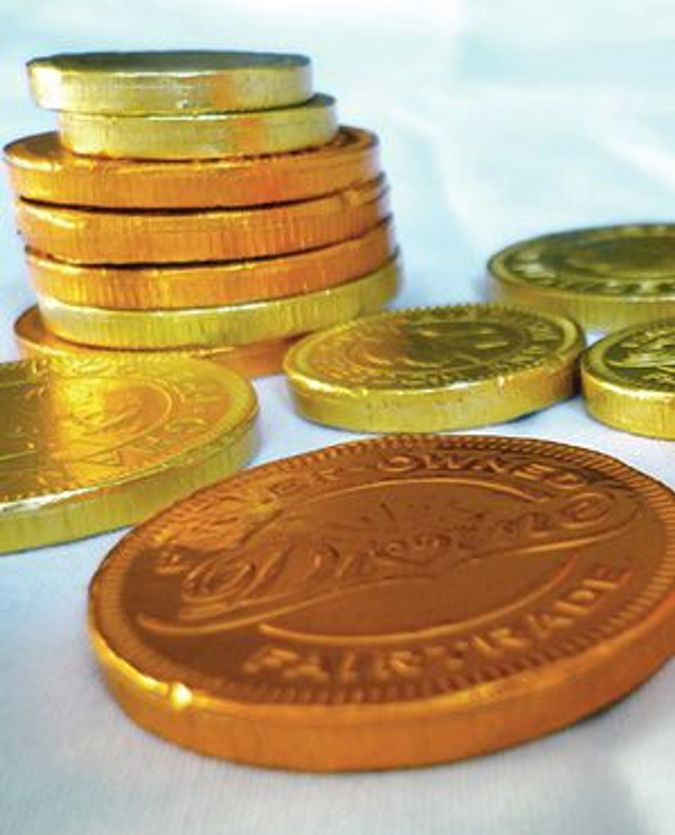 Image by COURTESY OF LEAH KOENIG

Before gelt (“money” in Yiddish) became synonymous with chocolate, it primarily referred to small amounts of money exchanged between friends, or gifted from parents to children during Hanukkah. The exact origins behind this tradition are murky. Popular legend ties it back to the miraculous Maccabean victory over the Ancient Greeks, when the Hasmonean descendants minted national coins to celebrate their freedom. But in his book “Holidays, History, and Halakhah” Professor Eliezer Segal suggests the 18th-century Eastern European tradition of recognizing religious teachers with a token of gratitude around Hanukkah time as a more direct predecessor. “Before long,” he writes, “…this [custom] evolved into a quasi-obligatory gift of Hanukkah-gelt”— something akin to today’s custom of tipping the mailman at Christmas. The connection with the Festival of Lights was largely etymological, Segal writes, since the words Hanukkah (dedication) and hinnukh (education) share lingual roots. By the 19th century, the practice of giving gelt had, for unknown reasons, shifted from teachers to children.

In America, gelt — anything from a few coins, to stock shares and savings bonds tucked inside greeting cards – became an integral part of the larger surge in popularity around Hanukkah that developed in the first half of the 20th century. American Jews had largely abandoned Hanukkah, which many considered a minor and irrelevant festival, in the decades following the Civil War. But as historian Jenna Weissman Joselit notes in her book “The Wonders of America: Reinventing Jewish Culture 1880-1950,” “By the 1920s, [the holiday] began to come into its own as a notable Jewish domestic occasion and an exercise in consumption…” Along with playing dreidel, frying latkes and lighting menorahs, gelt and gift exchanges solidified Hanukkah’s appeal as a bright spot on the long, dark stretch of calendar between the high holidays and Passover, as well as a significant celebratory parallel to Christmas.

Hoping to capitalize on the blossoming interest around Hanukkah, American candy companies like Loft’s first introduced gold and silver-wrapped chocolate gelt in the 1920s. Rabbi Debbie Prinz, who is researching the historical connections between Jews and chocolate, said that these companies may have drawn their inspiration from the chocolate coins (called “geld”) given to children as part of the St. Nicholas holiday throughout Belgium and the Netherlands in early December.

Of course, Loft’s edible currency was just one of many sweet Hanukkah gimmicks launched over the following decades. In place of a chocolate Santa Claus, Jewish children unwrapped brightly colored candy Maccabee soldiers, and, according to Joselit, in 1951 Barton’s Candy piloted a line of spherical chocolate latkes. One rabbi she quotes wondered if “…chocolate elephants (which were part of the Maccabean battle) and lions (which are the symbol of the Israelite tribe of Judah) will be as common in Jewish homes at Chanuko [sic] time as chocolate rabbits are in Christian homes at Easter time.” But it was chocolate gelt that ultimately emerged as the most successful and enduring of these products — a favorite among kids and a popular prize in games of dreidel.

Today, the majority of the gelt eaten in the United States is not produced here. Journalist Amy Klein writes in ‘The Jewish Journal of Greater Los Angeles” that, “[America’s] major kosher food companies — Paskez, Liebers, Manischewitz…import their chocolate coins from Israel,” where the Elite and Carmit brands are the major purveyors. The gelt churned out by these companies may score high on nostalgia, but — with its hyper sugary, faux-chocolate flavor and distinctively waxy snap — it lags on taste and quality.

More recently, however, a handful of companies have started to produce gourmet versions of the holiday treat that reflect today’s shifting ethical and culinary food values. The California-based confectioner, Sweet Earth Organic Chocolates, for example, offers an organic, 65% cocoa dark chocolate gelt. Similarly, Lake Champlain Chocolates from Vermont makes kosher, dark and mint chocolate coins, and in England, Divine Chocolate (whose products are widely available in the US) manufactures kosher and fair-trade-certified chocolate coins stamped rather appropriately with messages of justice and freedom. With recent delicious additions like these, those latkes better watch their backs.

Leah Koenig writes a monthly column on food and culinary trends. She can be contacted at [email protected].

Chocolate gelt is a key symbol of the mass consumer culture that has developed around American Hanukkah observance over the past 50 years. For those looking to simplify while still enjoying something sweet, here is recipe for delicious do-it-yourself gelt.

1) Line two baking sheets with parchment paper. In a double boiler over medium-low heat, melt chocolate chips, oil, vanilla extract and (optional) orange extract, stirring constantly until chips are completely melted, about 5 minutes. The mixture should be thick and malleable.

2) Turn off heat, but do not remove double boiler from burner. Working quickly, using your hands, pinch off a small amount of the chocolate mixture (about 1/4 teaspoon) and roll it into a ball. Set it on the lined baking sheet, and repeat until you have a few rows completed.

3) Using the bottom of a glass or the heel of your hand, flatten each ball into 1-inch “coins.” Top each coin with garnishes, if desired. Repeat this process until all chocolate is used up. If chocolate hardens during the process, add a tiny drizzle more oil, and heat over low heat until it is malleable again.

4) Place baking trays in fridge, and allow gelt to harden for at least 1 hour. Once chilled, wrap in foil if desired, or store in an airtight container.