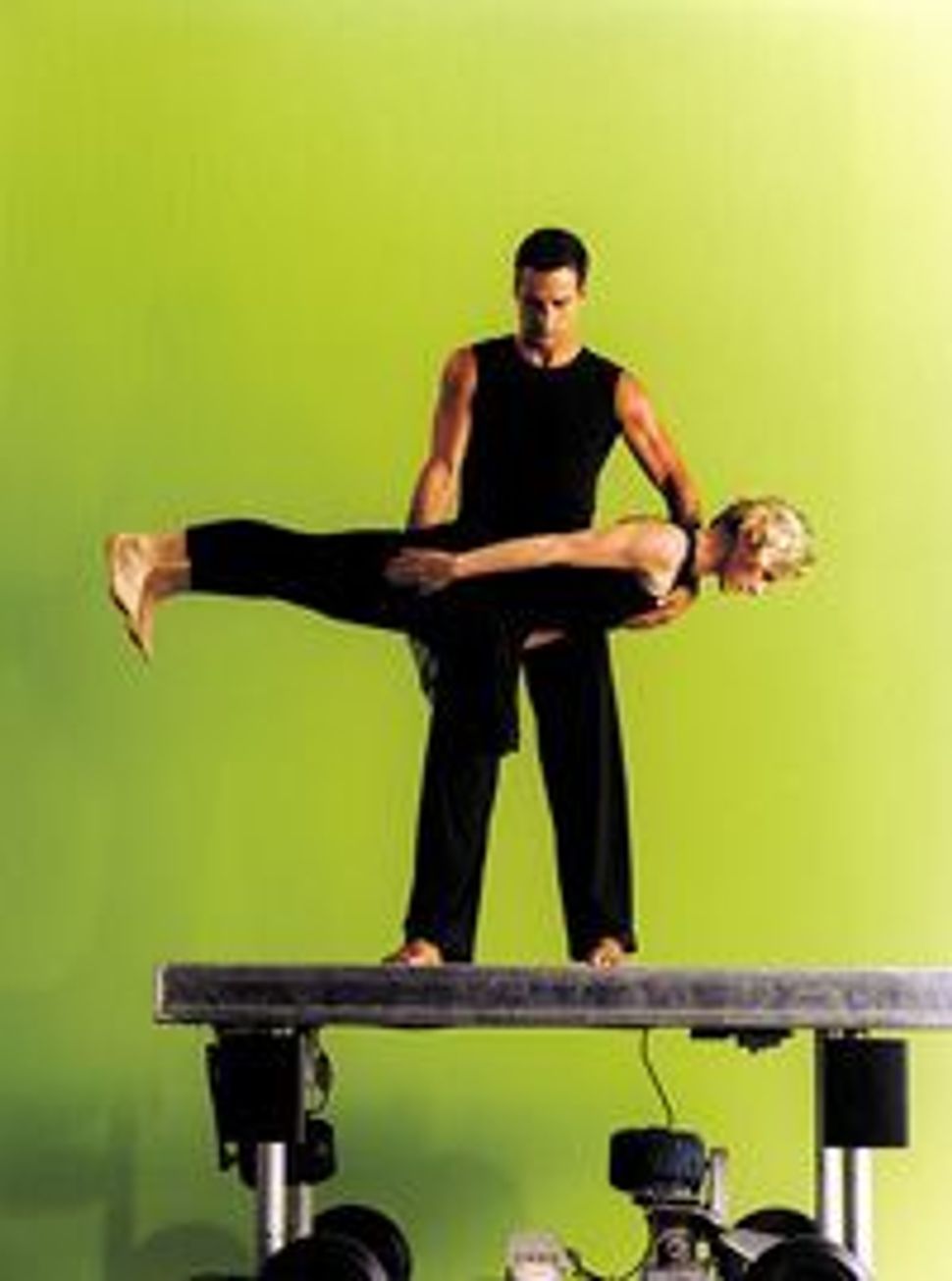 Taking it Lying Down: Deborah Colker with Marcelo Lopes in ?4x4.? Image by flavio colker

Our Forward 50 issue identifies the people who we feel are interesting, influential and important in the Jewish world. But although it?s people who make culture, it?s what they make, not who they are, that matters. 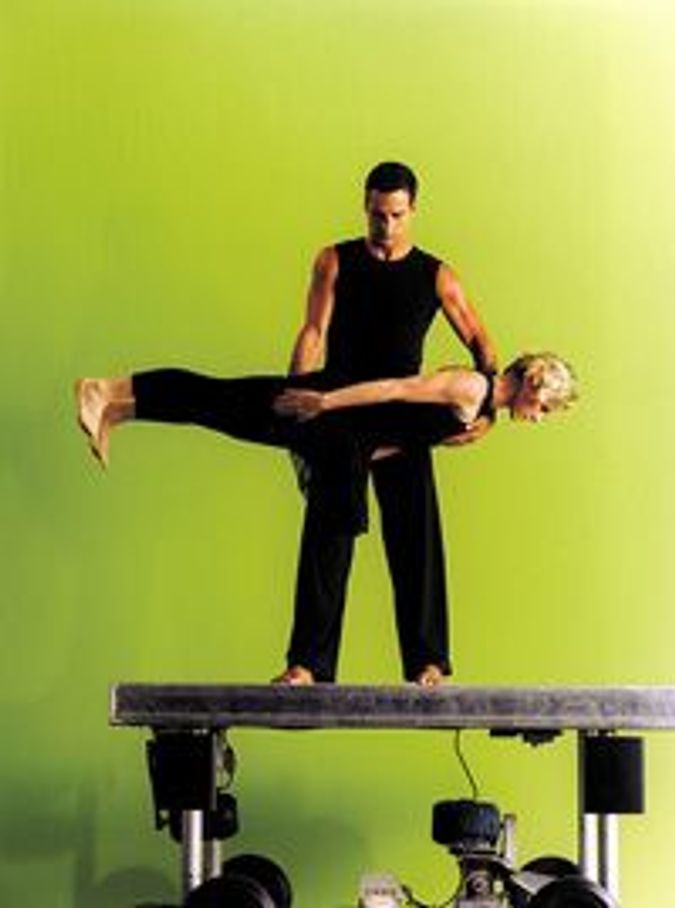 Taking it Lying Down: Deborah Colker with Marcelo Lopes in ?4x4.? Image by flavio colker

Below is a new annual feature, the Forward Fives, celebrating the cultural insights, experiences and productions of the past year or so. Since it?s the first one, we?ve included some 2008 releases that arrived in 2009.

Books
Pictures are the new words. R. Crumb?s re-visioning of the ?The Book of Genesis Illustrated? was the word made fleshy. Glen David Gold considered the birth of the modern world through moving pictures, war and money in his virtuosic novel about Charlie Chaplin, ?Sunnyside.? Also virtuosic was Sana Krasikov?s unnerving collection of stories, ?One More Year,? which arrived in paperback in time for summer. Unsettling, too, was Yoel Hoffmann?s ?Curriculum Vitae? a poetic novel-like memoir that defies easy definition and makes sense through Hoffmann?s bending of genres.

Films
?Inglourious Basterds? ([view a clip here) and ?A Serious Man? ([view a clip here) both raised interesting questions about Jewish character, self-love and self-loathing ? but only among Jews. Everyone else either just enjoyed the violence in the Quentin Tarantino film or ignored the Coen brothers? movie altogether. Heavy metal in different guises provided two other films on view this year. ?Anvil! The Story of Anvil? showed how loyalty, passion and perseverance maintained a Canadian band over decades. In Samuel Maoz?s ?Lebanon? (view a clip here) the claustrophobic armor-plated sides of the tank test the loyalty and sanity of the young Israeli soldiers within.

Performance
Ariane Mnouchkine?s Théâtre du Soleil (?Les Éphémères? at New York?s Lincoln Center Festival) and Deborah Colker (?4×4?) produced moving performances in both senses of the word. Murray Perahia playing Bach, Beethoven and Schumann at Carnegie Hall was a lifetime highlight for any concertgoer. Implicitly Jewish family angst appeared off-Broadway in the excellent musical ?Coraline.? Meanwhile, Leonard Cohen threw off the shackles of angst to globetrot his first triumphant tour in more than a decade. And Idan Raichel, to whom the idea of angst appears anathema, grooved his dreads across America.

Music
2009 was a year in which three trends outweighed any individual releases: the hybrid Jewish rap, the recovered Sephardic swing, and the old made new and gritty again. The first is exemplified by the debut albums ?Waywordwonderwill? by Eprhyme, ?Beverly Dillz? by Kosha Dillz and ?Exotic on the Speaker? by Soulico. Roberto Juan Rodriguez?s ?Timba Talmud? is the best example of the second trend, but ?Mazeltov, Mis Amigos? by Juan Calle & His Latin Lantzmen, and ?Ladino Love Songs? by Etty Ben-Zaken are also worth a mention and inclusion on your playlist. Each profound in its own way, ?Pitom? by Yoshie Fruchter, ?Hope and Destruction? by Eyal Maoz?s Edom and ?Hidden Melodies Revealed? by The Sway Machinery take Jewish themes to new, complex and gritty places.

Exhibitions
Since all exhibitions are, to some extent, local installations, sometimes it can be tough to note important ones. Three exhibitions this year proved not only that their subjects could stand the test of time, but also that there was something to add for this century. Chagall and the Artists of the Russian Jewish Theater, 1919?1949 originated at the Jewish Museum in New York, as did Alias Man Ray: The Art of Reinvention which is on display there until March 2010. The Chagall exhibit, however, had an extended and successful run at the new Contemporary Jewish Museum of San Francisco, where it also looked superb. Nothing, really, could compete with Looking In: Robert Frank?s ?The Americans? at the Metropolitan Museum of Art: a clarity of revelation that is still breathtaking 50 years after the original book.

?Maimonides and His Heritage? by Weinstein, Goodman and Grady offers a richer context to our favorite philosopher. ?The Passing Game: Queering Jewish American Culture? by Warren Hoffman drew a new set of rules into the open. No Jewish list is complete without Peter Manseau, whose ?Rag and Bone: A Journey Among the World?s Holy Dead? was eminently readable and enlightening.

?Bruno? again displayed Sacha Baron Cohen?s gift for high comic provocation?though by grossing half of what ?Borat? did, it revealed that anti-Semitism is a less disturbing phenomenon to have (literally) pushed in your face than overt homosexuality.

Kate Winslet won the Oscar as a supposedly pitiable Nazi guard in ?The Reader,? proving for some that the Holocaust is always Oscar bait. What it really proved is the popularity of the notion that everyone is a racist and everyone is redeemable (to which one might answer: no and no.)

More Music
?The Barry Sisters – Their Greatest Yiddish Hits,? it?s not a Jewish Christmas without it.

Exhibitions
Frank Auerbach?s ?London Building Sites 1952?62? at the Courtauld was, is, simply immense.

In year when they were disputed more than ever, the Dead Sea Scrolls were displayed better than ever: at the Royal Ontario Museum.

Also, not to be missed!

Thanks to all who contributed to this. You know who you are.

For an entirely different take on the past year, Joel Schalit?s always provocative My Year in Consumption is now up online.

Make your own suggestions for notable cultural products of the year and decade below.