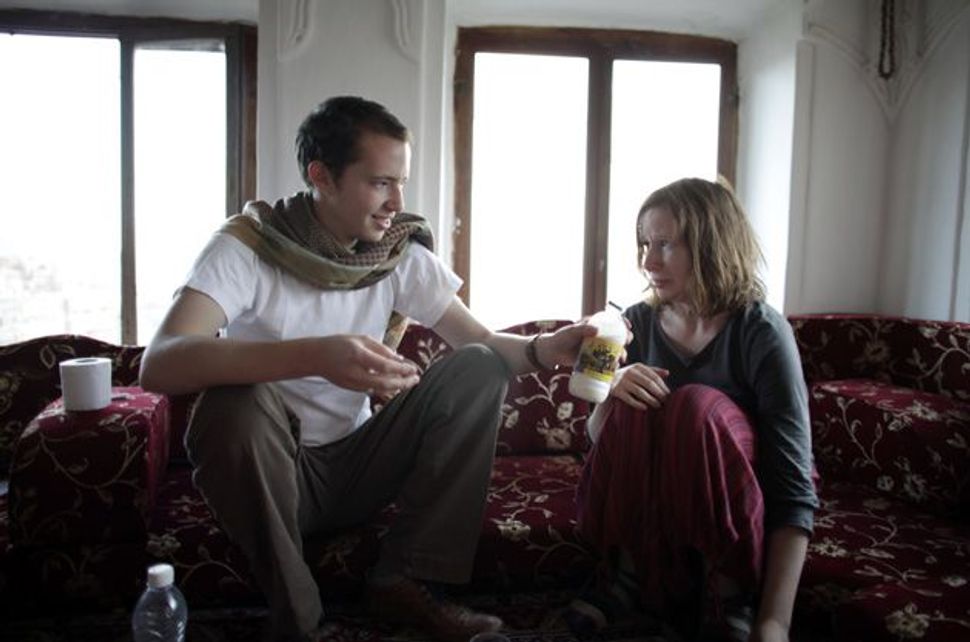 Josh Berer made a decision when he arrived in Yemen: He would tell people he was Christian. He had taken this precaution before — when he lived briefly in Jordan — but now, in the heart of the Arab world, where antisemitic rants blared at him constantly from loudspeakers and “Jew” was synonymous with evil, it was a necessity.

And it worked. Except for those few times when a Yemeni would begin to question him about his “religion.”

“Suddenly I found myself having to defend the concept of the trinity,” Berer said.

It was just one of the absurdities that Berer, a Canadian Jew and recent graduate of the University of Washington–Seattle, encountered during his time in Yemen.

But the ploy enabled Berer and his girlfriend, photojournalist Rachael Strecher, to spend time with the last remnants of Yemen’s endangered Jewish community. Berer’s report and Strecher’s photos are featured in this issue of the Forward.

Now 24, Berer has lived in the country twice. The first time was when he was fresh out of college, looking to study Islamic law and Arabic, and ended up at the Sana’a Institute for the Arabic Language — the same school that Umar Farouk Abdulmutallab, the man suspected of trying to bomb a Northwest Airlines plane on Christmas Day, reportedly attended this past summer. More recently, Berer went back for two months last fall, this time with Strecher, who joined him in exploring a community with which he says he had become obsessed: the dwindling population of Yemeni Jews.

In between the two trips, Berer spent a year in Israel, where he met Strecher, also a recent college graduate who had come to learn Arabic. He had gotten a fellowship with the New Israel Fund to work with Bedouins in the Negev.

His initial encounter with the Jews of Yemen came during his first stay in the country, spending a week in the 400-person Jewish village of Raida. It was a chance to see a group of Mizrachi Jews in their indigenous setting, and he was shocked at how much like other Yemenis these Jews were. The only exception, it seemed, was their side locks.

“The fact that they still exist really blew my mind,” Berer said. “And the fact that they are so Arab and so Yemeni intrigued me to a point where, after the first time I got back from Yemen, I tried to get every book I could find on them.”

The Jews of Yemen seemed to follow him, as well. When he was living in the Negev, he tried to save money by renting a room at an absorption center in Beersheba. Last February, when the Jewish Agency for Israel secretly helped nine Yemeni families immigrate, Berer suddenly found himself next door to some of the same people who had hosted him in Yemen. He knew he had to go back.

“So much of it was that they were the last of them, and we wanted to see them and get to know them while they were still there,” Strecher added.

The couple spent two-and-a-half months this past fall living in Sana’a, the capital, and most of their time was devoted to getting to know the 67 Jews who were evacuated there by the government in January 2007, when the civil war raging in the south of the country reached their village. These last remnants, part of only 250 Jews left in the entire country, live in a compound called Tourist City, in a state of limbo, unable to have a normal existence.

Berer collected folklore. Strecher shot photos. And the community, wary of them at first, eventually took them in, treating them warmly.

“They would tell us that anything we ever needed, they wanted to help us,” Strecher said. “They would get very offended if we left them for a few days. At the end of our stay, I got sick, so we had to leave more suddenly than expected. I was shocked when they insisted on driving us to the airport — 12 of them in the car with us. We were very close.”

They also encountered the strange paradox of living in a place where, they found, the Yemenis as individuals were utterly hospitable and open — even “goofy,” Strecher said — but where antisemitism was rife; where Berer said he often felt “like a criminal, like a fugitive”; where they had to hide the fact that they were Jews.

The experience was not dissimilar from how the Yemeni Jews themselves interacted with their society.

“People who knew them thought of them as the ‘good Jews’,” Strecher said. “But the idea of Jews was repulsive to the general public. I’m not exaggerating. Every week, you heard on the loudspeakers about how the Jews were the cause of all evil, the root of everybody’s problem.”

Partly as a reaction — as a form of “defiance,” as they put it — the two found themselves embracing their Jewish identities as they never had before.

They also learned to embrace the ambiguity of the situation.

“This is something my dad could never do,” Berer said. “If he knew someone was an antisemite, that’s it, [that person] would be dead to him. But you have to interact with people, and you have to have friends. And you can’t just walk around all day feeling victimized and that everyone is your enemy. Even though if they knew we were Jews, they would make problems for us.”

Berer and Strecher even came to understand the hatred swirling around them as a matter of brainwashing, the result of a government looking to distract its citizens.

“Yes, they all in principle hate Jews,” Berer said. “They were brought up that way. But you can’t really blame them at this point, because they are just so indoctrinated on every side. They never had a choice in the matter.”