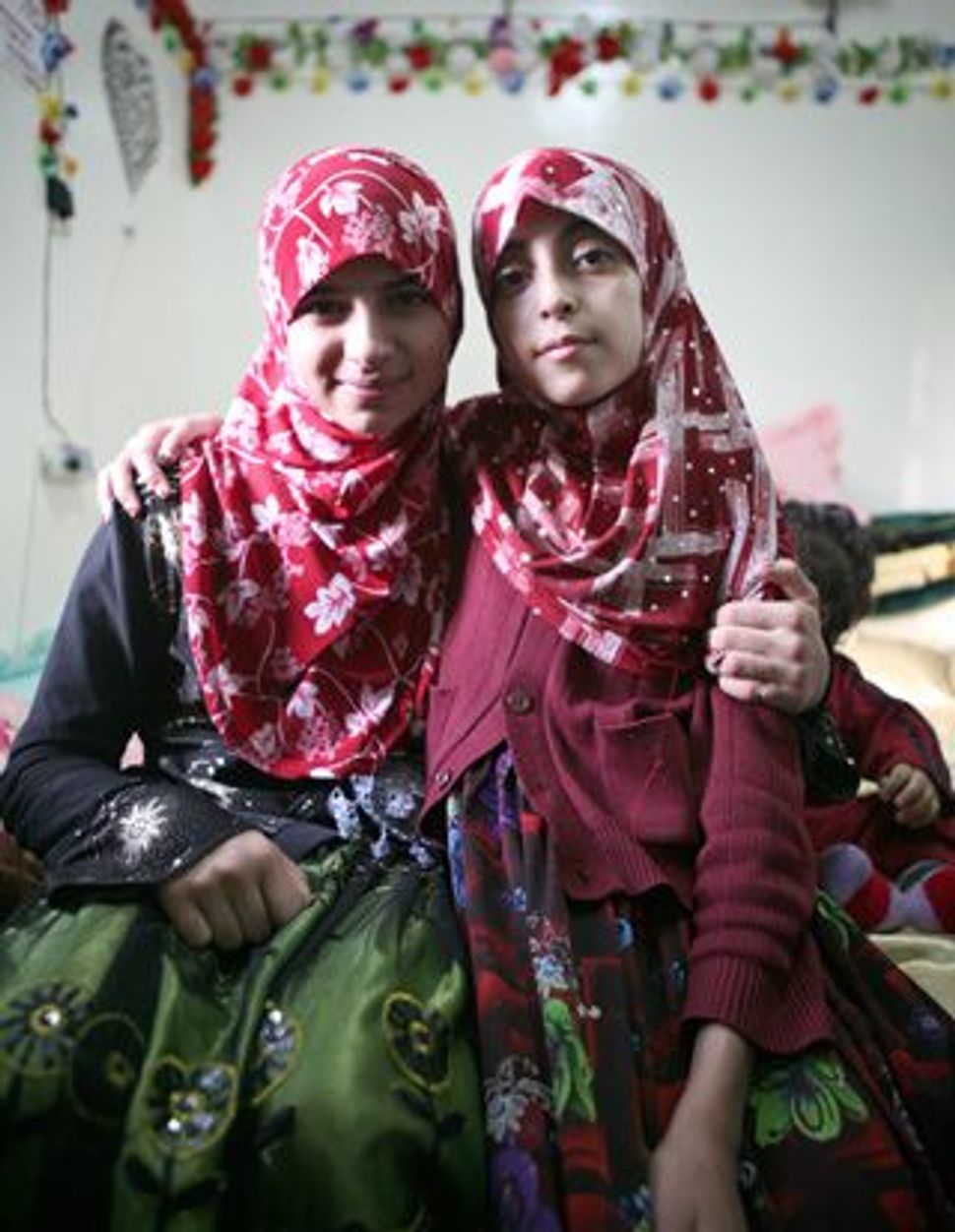 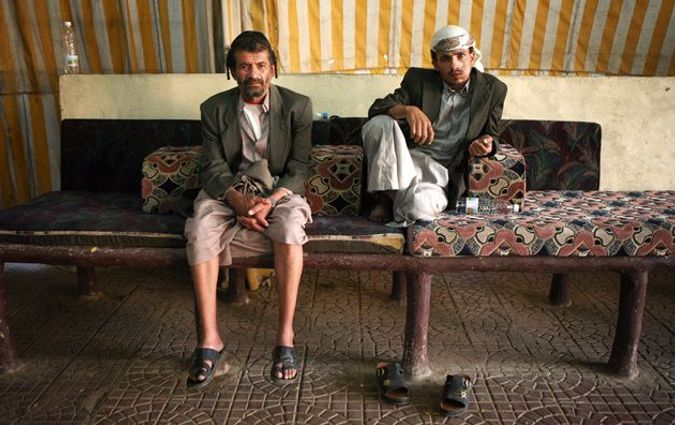 ?No Place Like Yemen?: The few remaining Jews in Yemen have little left but themselves and their traditions. Moussa Marhabi, left, and his son, Yousuf Salem Marhabi, rest during a wedding. Image by RACHAEL STRECHER/Polaris 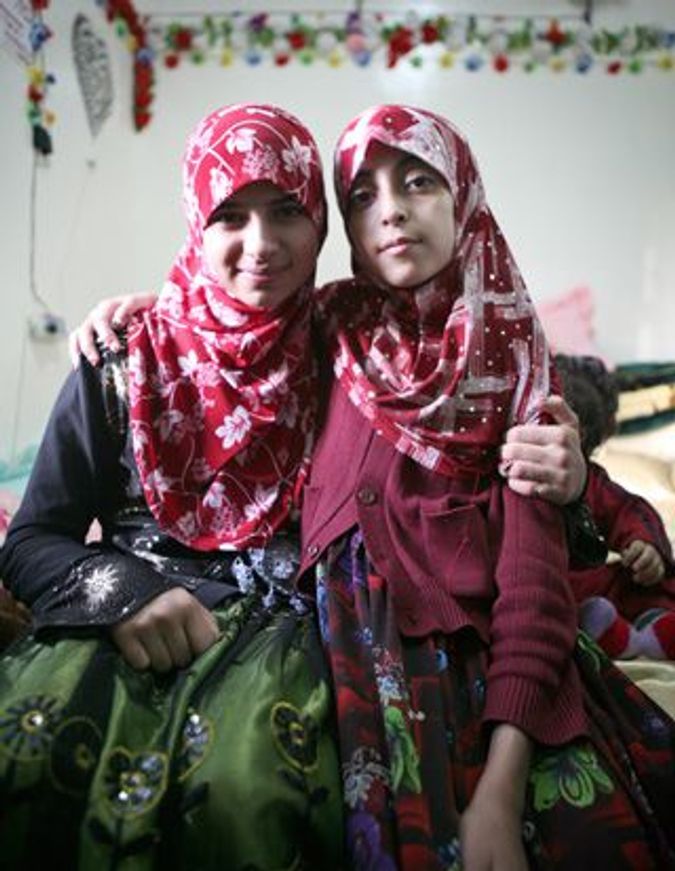 “Dog,” he mutters under his breath.

Al-Marhabi has reason to dislike al-Houthi: In January 2007, Shi’ite rebels loyal to al-Houthi forced al-Marhabi and his entire community to flee their homes in the north of Yemen, near the Saudi border, under cover of darkness. Taking with them only what they could carry on their backs, the Jews of Sa’ada left their mud brick homes in that ancient walled desert city to take up residence in Yemen’s capital as wards of the government.

Al-Marhabi is the rabbi and leader of this band of refugees — some of the last remaining Jews in Yemen — and it has been three years since these Jews have seen the village in which their ancestors have lived for centuries.

Now, says 24-year-old Abdallah bin Suleiman Marhabi, the rabbi’s cousin, “There’s nothing for me there. They took everything after we left, and then destroyed our homes.”

The death threats that forced the Jews of Sa’ada to flee did not come from a group related to Al Qaeda — a growing movement in Yemen that has commanded world attention by taking responsibility for the attempted Christmas Day bombing of a Northwest Airlines plane en route to Detroit. In fact, Al Qaeda, a militant Sunni group, counts Shi’ite Muslims like al-Houthi among those they hate. But the al-Houthi rebellion has been no less devastating for the Sa’ada Jews for all that. And the government, until now, has seen this rebellion, rather than Al Qaeda, as the primary threat to its shaky sovereignty over a mountainous desert land rife with armed tribal groups that have complex and shifting relations with each other, with Al Qaeda and with the government.

Sana’a, Yemen’s capital, is one of the few places where the government exercises unchallenged sovereignty. So, when the Jews of Sa’ada fled their village, it was to here they came. The government stepped in to provide them with homes, food allowances and a modest monthly stipend to sustain them and their basic needs. They number 67 people, split among seven large families.

The Jews’ situation is one of stagnation: They do not work, as they cannot afford the start-up costs for their businesses. Many of them are silversmiths, some are carpenters and mechanics. All require expensive equipment.

And so they sit. They spend their days chewing qat, a habit-forming stimulant whose use among Yemenis is ubiquitous. It is this atmosphere of stagnation that breeds talk of emigration among some of the younger men and women in the Jewish community who contemplate better options in Israel or America. To address this problem, and provide incentives for community members to stay, the Yemeni government is currently in negotiations to provide them with start-up capital for their businesses.

The government may be supportive, but in Yemen, antisemitism runs deep. Jews are routinely singled out in sermons as an easy target for vitriol, a scapegoat to turn attention away from the problems of the here and now. But the Jews in Yemen brush off the hatred of those sermons with nonchalance and an air of aloof exemption, as though the hatred applies only to foreign Jews, not to Yemenis. Most Muslim Yemenis have never met a Jew, and so they are excited and amazed to learn that indigenous Jews still live in Yemen, speaking the same dialect as Muslims. It seems that for many Yemenis, the antisemitic notions that are taught from early on somehow do not apply to the Jews in Yemen, who are seen as countrymen and friends — though not, apparently, by the al-Houthis.

Al-Marhabi is the lynchpin of Jewish life here: He is the only one who knows the laws of kosher slaughter, circumcision and many other basic services needed for a Jewish community to survive. He is also fiercely proud to be Yemeni. He wears a Yemeni flag upon his lapel, and boasts of his personal friendship with Yemen’s president, Ali Abdullah Saleh, of whom he speaks in glowing terms.

“There is no place like Yemen,” he tells a visitor. “Not in America, not in Israel, it is just not the same. When the people of Yemen say, ‘We don’ want a single Jew here,’ I will go, but until that day, Yemen is my home, and it is where I will stay.”

Political instability has rarely spelled good news for Jews, and Yemen is no exception. With the revelation that Umar Farouk Abdulmuttalib, the accused would-be bomber of Flight 253, received training in Yemen, the country’s status as a terrorist hideout has, once again, put Yemen in the spotlight. With the insurrection in the north of the country, and a separatist movement in the south, the government’s resources are stretched thin.

But for all the country’s problems, in Yemen, al-Marhabi is special: Government ministers contact him for his opinion on various matters; journalists call him almost daily for quotes, and TV crews routinely set up in his living room, treating him as both a rare anomaly and a trusted confidant. He is, for many Yemenis, a “safe Jew,” one who sings the official party line, and issues anti-Zionist statements condemning the Israeli government.

What he often brings up, and what many forget, is that the Jews in Yemen are Arabs. Their native language is Arabic, and their dress, food and gender norms are culturally indistinguishable from “normal” Yemeni Muslims. They are the ones who have stayed when almost all their brethren left, for the most part for Israel. And most remain determined to stay: Yemen is their home, and the thought of having to reinvent themselves in America or Israel is daunting and unappealing to them. Their identity is that of Arabs, and they speak of Zionism and Zionist organizations with disdain. Centuries of sparse contact with the wider Jewish world have deepened this identity, and they view even the Ashkenazic, anti-Zionist Satmar Hasidim who come to court them with deep suspicion.

In fact, nearly 10 of them have studied in Israel, some for two years or longer, and have chosen to return to Yemen rather than stay in Israel.

The families of this community are particularly concerned about their children losing touch with their heritage and religious tradition, should they emigrate. Those who have gone to Israel and returned have told tales of scantily clad Israeli women, men without peyes who do not pray and the disintegration of traditional Yemeni Jewish life. Faced with a multitude of options in Israel, children are no longer bound to the Jewish community by default, and the retention rate within the community plummets. From this perspective, Yemen is a vastly more pious country, where the children will be raised with a strong and comprehensive Jewish education — in the distinctive Yemeni way.

Many involved in the process of bringing Jews to Israel, learning lessons from earlier Yemini immigration waves, took these concerns into consideration and offered the Yemenis placement in Orthodox communities and religious-education options for their children. Despite those offers, the holdouts still refuse to leave their homeland.

Still, no degree of fervor or love of country can delay the inevitable, and given their numbers, it is within our lifetime that this ancient community will disappear.

In this far-flung and forgotten corner of the map, the perseverance of the last Arab Jews dimly flickers. It is a land with an ancient Jewish presence that

was once ruled by a Jewish king — Yusuf Dhu Nuwas in the sixth century. Many tribes back then converted to Judaism, and even today there are tribes, long Muslim now, whose members are nevertheless aware of their descent from Jewish forbears.

Prior to the 1950s, Yemen had more than 50,000 Jews spread throughout the country, but with the creation of the State of Israel, the vast majority left, in a legendary operation known as Magic Carpet. Several thousand remained until the early 1990s, until they, too, left for Israel. Now, only a few hundred remain. Besides the 67 refugees from Sa’ada now living in the capital, fewer than 200 live in a small village called Raida, roughly two hours north of Sana’a. It was in Raida that a Jew named Moshe Yaish al-Nahari was murdered one year ago, gunned down in the street outside his home. His murder sparked a new exodus of Jews from the country.

But for al-Marhabi and the people who depend upon him, they will continue to exist as they have for a thousand years or more: protecting the traditions and passing on the Torah and Talmud from generation to generation. Despite their Arab cultural identity, their pride and patriotism, the Jews here will always be a community unto themselves, a vulnerable niche within, rather than an equal part of, the greater Yemeni society. Until the time of their departure, however, these few individuals are the last Mizrachi Jews in their indigenous context, and should they leave, a piece of Jewish life will be lost to the world.