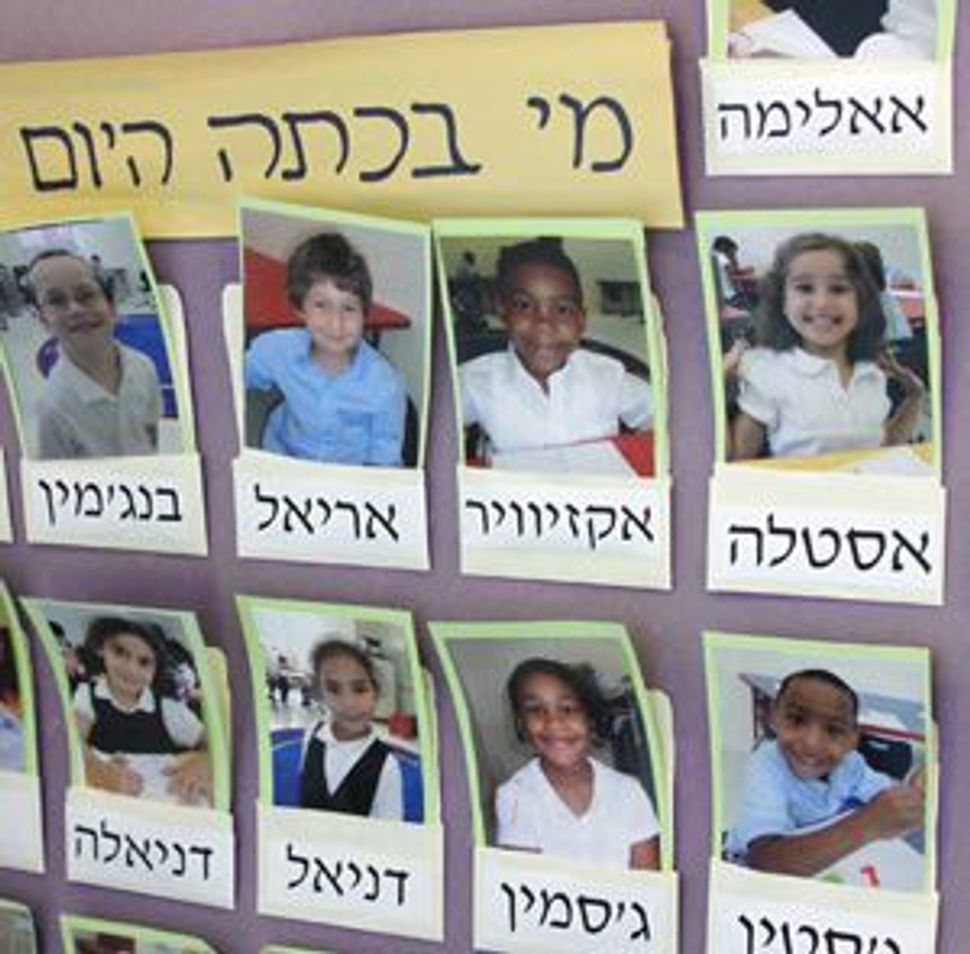 Immersion: At the Hebrew Language Academy, teachers integrate Hebrew into all aspects of the day, from mathematics to social studies to gym. Image by SHULAMIT SEIDLER-FELLER

On a recent Monday morning in southern Brooklyn, 20 kindergarteners sat on a rug, staring up at a photo of President Obama. Their teacher, Nitzan Graham, asked them, in Hebrew, to identify the parts of Obama’s face, and the children were ecstatic, yelling out the Hebrew words for “nose” and “mouth.” When the ruckus had died down, Graham asked Jasmine, a 5-year-old African-American girl with pigtails, to stand up. “What are these?” the teacher asked, pointing to Obama’s eyes. “Ena’im!” the girl said gleefully. 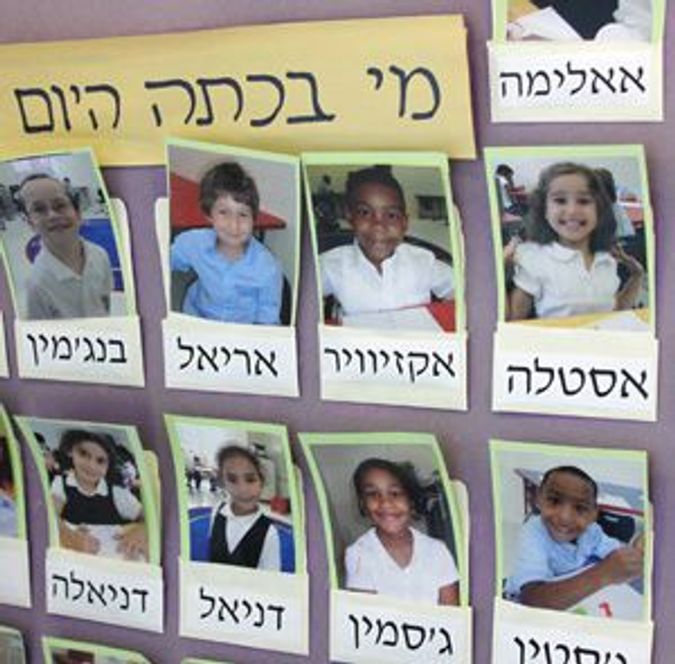 It’s a typical morning at the Hebrew Language Academy, a charter school mostly funded by the state of New York. Its dual-language program is among the first of its kind, making the four-month-old school a showcase for others interested in using it as a model.

The 150 first-graders and kindergartners seem unfazed by the attention, and the school itself appears to be overcoming what has been its most significant hurdle: the skeptics who worried that Hebrew cannot be taught without stepping over the strict religion-state divide that all publicly funded institutions must legally respect.

If this question lingers, it hasn’t dissuaded the development of a spate of other Hebrew-language charter schools across the country. In addition to the Brooklyn academy, there are two other similar institutions now in existence: the Ben Gamla Schools in Florida, which are located in less diverse communities than that of HLA and present themselves explicitly as free, nonreligious alternatives to Jewish day school. But two new schools will open in August: the Albert Einstein Academy for Letters, Arts and Sciences in Santa Clarita, Calif., and Hatikvah International Academy Charter School in East Brunswick, N.J. Both are more in the mold of HLA, trying to bring Hebrew-language education, without any explicitly Jewish identity, to mixed communities.

Charter schools now constitute a quietly growing movement and are increasingly grabbing the interest of Jewish philanthropists interested in creative ways of ensuring Jewish continuity. The California and New Jersey schools are just two of six Hebrew-language charters that will be receiving $750,000 in grants from the Hebrew Charter School Center, an initiative funded by the Areivim Philanthropic Group, a charity launched by Michael Steinhardt and William Davidson, the now deceased owner of the Detroit Pistons. Steinhardt, the Jewish philanthropist who helped found the widely respected Taglit Birthright Israel program has already pledged $500,000 a year to HLA.

Steinhardt’s daughter, Sara Berman, chairs both HLA’s board and the new center, whose goal is to help fledgling charter schools all over the country. Last January, the center held a three-day conference in New York’s Westchester County, at which various charter school initiators discussed strategies for advancing their projects, with an emphasis on confronting the church-state issue.

Maureen Campbell, HLA’s charismatic principal, gave the Forward a tour of the school in early February. Campbell, who has Jamaican roots, is trying to learn Hebrew, greeting the children in the language first thing in the morning — before the American Pledge of Allegiance. Choosing her as the public face of HLA was seen as a smart move by many observers. Campbell’s lack of connection to Judaism and to Hebrew gives the school the appearance of being open, which allowed it to attract a more diverse applicant pool. The makeup of charter schools in New York is the result of a random selection from among the applicants. At HLA, the student body is 61% white.

With only kindergarten and first grade classes (a second grade will be added the next school year, and an additional grade each following year), the school has had a relatively easy time avoiding the church-state pitfalls. The young children are learning basic vocabulary in Hebrew, like the words for colors and articles of clothing. To the eyes of a visiting reporter, they seem to be doing this with great enthusiasm, singing simple songs and responding to their teachers’ commands even when they are in Hebrew. The instructors uniformly say that while the children who have Hebrew reinforced at home are at an advantage, they also admit being amazed at how quickly all the children are picking up basic speaking and comprehension skills only four months into the school year.

There was no physical sign of religiosity at the school. Administrators even ripped out the mezuzas from the doorframes of what were once rooms that housed a yeshiva (now moved to the second floor of the building). The only Judaism displayed on a recent morning was when a group of first graders were taught “Hinei Ma Tov U’Manaim,” a song about brotherhood taken from Psalm 133.

The pedagogical model used for language learning is immersion. Each class has both a Hebrew and a general studies teacher. An hour a day is devoted entirely to Hebrew, and then the language is integrated into other subjects, such as mathematics, physical education and social studies.

Ron Azoulay, the school’s Israeli-born director of Hebrew, says HLA employs a “workshop method,” which encourages “active engagement” and means that language is taught with the aid of “books, songs and other concrete materials.”

The blue-and-white tiled halls of the school are covered in the students’ construction paper projects. Some of these speak to the diversity that exists even in a school where, according to Campbell, a majority of the students’ parents asked that their children be served meals that are kosher or halal [permissible according to Islamic law]. On one wall, where the children wrote sentences about what is eaten at their homes, one described “borscht” and “kvass,” the Russian fermented drink made from rye bread, while another wrote, “goat’s head soup.”

For the Jewish parents, the appeal of the school is not difficult to discern. Those interviewed by the Forward talked about the school’s affordability compared with that of Jewish day school, and the centrality of Hebrew to Jewish identity. Tuition at Jewish day schools in the New York area can run into the tens of thousands. Most of the Jewish parents weren’t concerned about the absence of religious education, and those who were said they were looking into after-school options to compensate for what the school cannot legally provide.

“One can learn Judaic studies throughout their lives, but it’s difficult when you don’t have a grasp of the language,” said Ronit Hanono, whose daughter, Jordana, is in kindergarten at the school. “So HLA was a nice combination for me in these hard economical times where I wanted a happy balance. The good yeshivas are very expensive. But I still wanted to give my children some sort of connection.”

Hanono did say that she supplements what she called “the lack of Talmudic studies” with an after-school religious program.

For the non-Jewish parents, the appeal is less obvious. Most of the African-American students, who, according to Department of Education statistics, make up about 35% of the student body, come from Caribbean backgrounds.

“There may be some who might think: ‘Why involve him in Jewish culture? Won’t you be robbing the child of his own identity?’” said Deborah Harte, a co-president of HLA’s parent organization whose son, Brandon Latortue, is in first grade. “But the Jewish culture and the black struggles parallel each other. I don’t think our histories are so far apart that it would be difficult for him to empathize with what he was learning.”

When it came down to it, for Harte and other non-Jewish parents, the educational experience at HLA — notable for its low teacher to student ratio of 12-to-1 as compared to an average of 15-to-1 at most New York City public schools — made a convincing case. Harte, who has Guyanese roots and whose husband is Haitian, also felt that there were benefits for her son that would come from learning another language, whatever it might be, and from the atmosphere of diversity.

“I know he’s only 5,” Harte said, “but it wouldn’t be the weirdest thing if he ends up deciding to be a U.N. translator after all this.”