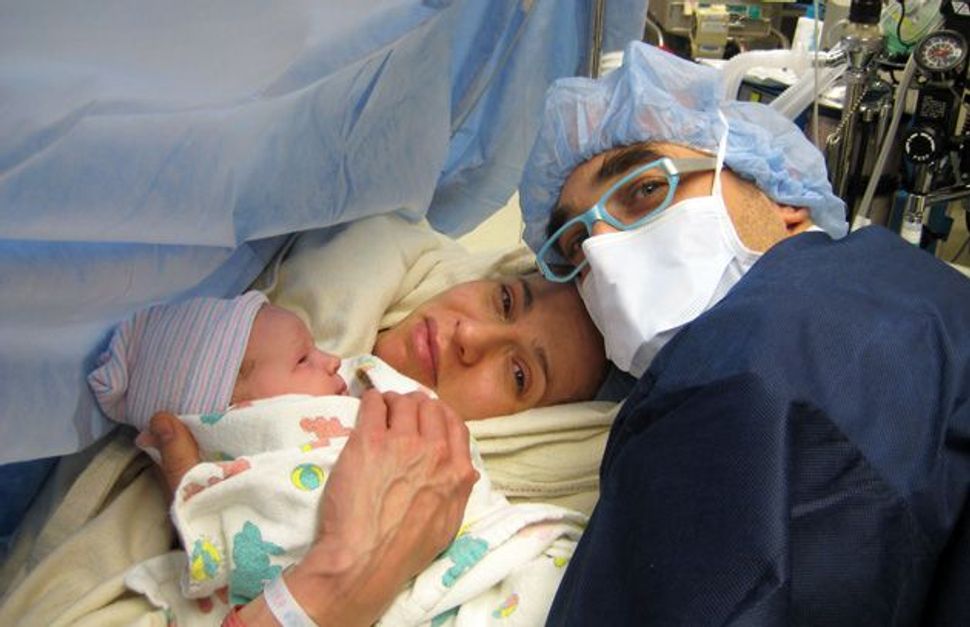 Happy and Healthy: After 36 hours of labor, Wildman opted for a C-section to ensure the health of her baby. Image by Courtesy of Sarah Wildman

Recently I was asked to participate in an art exhibit called “Cesarean Voices.” A call for submissions for the show, organized by the Baltimore chapter of the International Cesarean Awareness Network, explained that its aim is to “[educate] the public to the reality that cesareans can have profoundly negative physical and emotional consequences for women and those close to them.”

Sounds good. According to a National Vital Statistics Report, cesarean births in America have been steadily rising over the past decade. By 2007, C-sections accounted for more than 31% of all births, even though the World Health Organization maintains that C-sections in industrialized nations should hold steady at 15%.

The reasons for the rise are myriad: older moms, increased number of induced births, a move away from delivering breech births, the rise of electronic fetal monitoring, an increase of twins, the rise of malpractice suits and, some believe, a more relaxed attitude toward the idea of cesareans versus vaginal births.

But C-sections are major surgery with all its attendant problems.

Jewish law is straightforward about cesarean births: permissible to save the lives of mother and child. And yet, the product of that birth is somehow perceived as less natural. A bris of a cesarean-born boy, for example, does not supersede the Sabbath, unlike that of his vaginally born brother. A Pidyon HaBen, which is the firstborn son’s “redemption,” does not take place for cesarean-born boys, because the child, in effect, is not the firstborn of his mother’s womb. Rabbis seem to have taken a “Macbeth”-like approach: In Shakespeare, a C-section makes a child “not of woman born.” This was not the way we were meant to birth. The Mishnaic term for C-section was “yotzei dofen,” meaning “out of the wall [of the abdomen].” It’s a phrase that modern Hebrew linguists use as synonymous with “unusual” or “exceptional.”

And yet it’s become all too normal. Increasingly we hear stories about women being denied the births they want, by hospitals either insisting that a woman with a history of C-sections have another, or pushing a woman into medical interventions she hoped to avoid. A 2008 study at the University of California, San Francisco, found that the incidence of C-sections would drop dramatically if women were given two more hours to labor. Two! So, a countermovement has developed; blogs now document women’s efforts to find the most natural birth.

Yet there is a place for intervention. The polarization of the birthing debate has forced women into unyielding camps. Google the term “C-section debate,” and you’re more likely to find women calling it a trauma than celebrating a healthy birth. I’m not comfortable with that, either.

In their 2008 film, “The Business of Being Born,” director Abby Epstein and producer Ricki Lake probed the increasing medicalization of births in America, looking at our movement away from midwifery and toward hospitals. And Epstein herself, who in the film was rushed into an emergency C-section several weeks before her due date, just had a successful VBAC, a vaginal birth after cesarean.

I’m thrilled for her. But I’d also like to speak up for those of us who sought every means to avoid a C-section but had their birth plan go awry. Women needn’t feel they have failed when surgery is indicated. We’re called to “choose life in order that you and your offspring shall live” (Deuteronomy 30:19). And perhaps we can see medically indicated yotzei dofen as our exceptional birthright in the modern era.

Case in point: that art exhibit. You can participate if you had an unwanted C-section, if you had a medical complication from a cesarean, if you feel you were coerced into having a surgical birth, or if you are planning a subsequent birth and not finding a caregiver or hospital that will allow you a VBAC.

What if you felt a little disappointed, but overall were relieved that you and baby were alive? Sorry, the exhibit isn’t for you. You’re not sufficiently mourning your birth.

That makes me angry.

Inspired by Epstein’s film, and dismayed by the C-section rates with obstetricians, I sought out midwives halfway through my pregnancy in 2008. The pregnancy went marvelously; I prepared for an unmedicated birth at a hospital.

I was nearly a week overdue, and my labor began at 3 a.m. on January 12, 2009. At 24 hours, I was still only 2 centimeters along, sitting in a tub, feeling like my body was betraying me. The midwife suggested Pitocin, a drug used to speed up labor; I feared the spiral of interventions, but I agreed. In the end, when I was 36 hours into labor, still barely dilated, the midwife advised a C-section. We all started to cry.

Afterward, she said, “Now we could grieve for the birth I’d wanted.” Grieve? The kid was alive. I was alive. It wasn’t what I’d wanted, but if I didn’t have a C-section, at least one of us wouldn’t be here.

We, as a nation, need to challenge and push back the idea of why C-sections are so prevalent, why so many of us have them unnecessarily. We should look at the ways of birthing that we’re losing: the midwives who know that positions and movement, not being strapped to a bed, facilitate babies emerging into the world. When I told one OB that I was using midwives, she said, “But you seemed like such a reasonable person.” Exactly, it was the most reasonable way to ensure my chances of natural birth. My midwives, other than their misguided grief, were wonderful. And they made the right call.

But we also needn’t encourage mourning from women who do have medically indicated C-sections. I want an art show, too. In it, I’ll celebrate that yotzei dofen and my lopsided scar and my beautiful child.

Sarah Wildman writes about the intersection of culture, politics and travel for the New York Times and the Guardian.