Conflict Brews Over Palestinians Airing Views in the Pews of Pasadena 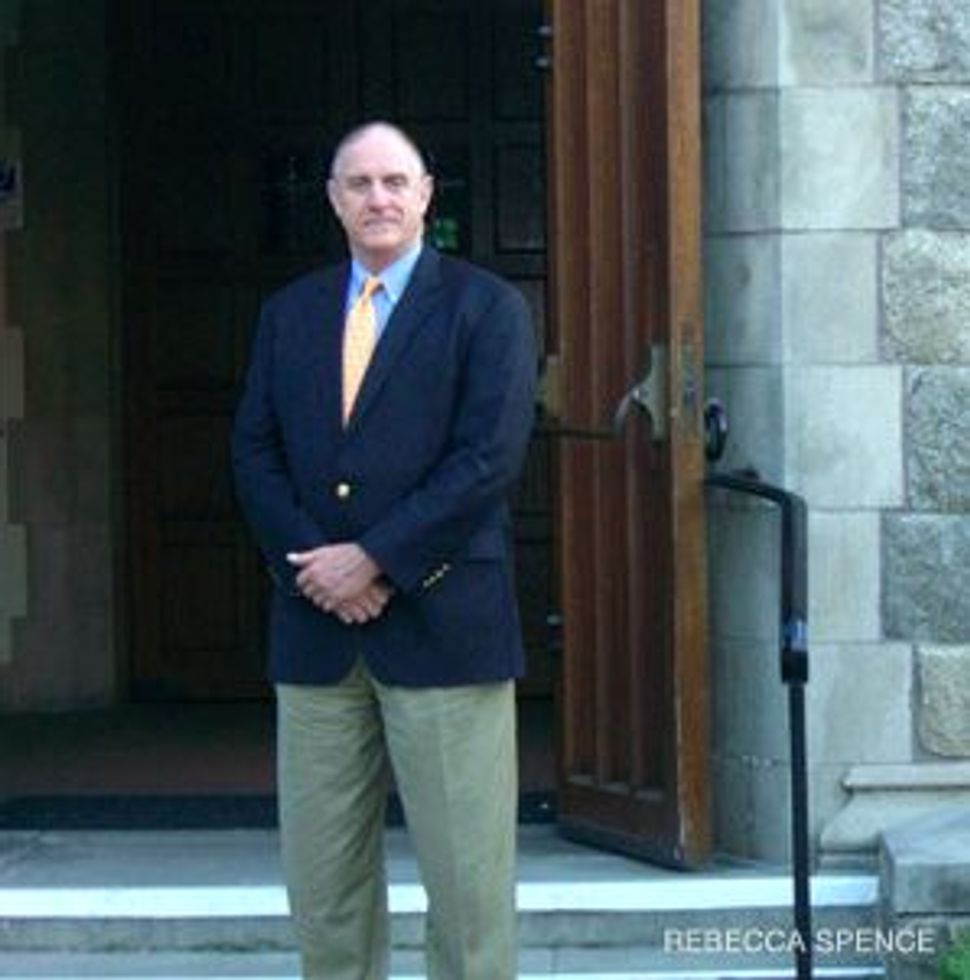 Bacon: The church's rector met with members of a nearby temple to hear their concerns this week.

Los Angeles – An influential Episcopal church in Pasadena with long-standing ties to the Jewish community is coming under fire from local Jews for hosting a Palestinian Christian activist group’s conference. 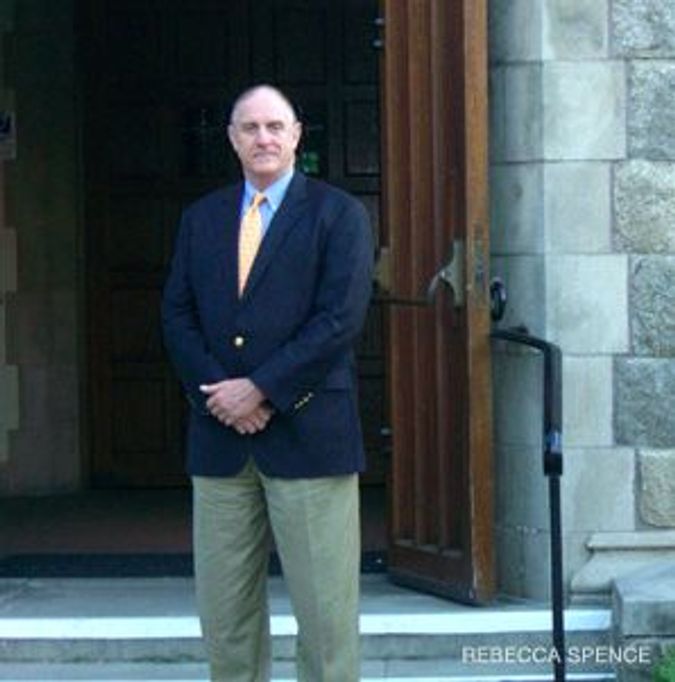 Bacon: The church's rector met with members of a nearby temple to hear their concerns this week.

The conference, “From Occupation to Liberation: Voices We Need To Hear” slated for February 15 and 16 at All Saints Church, a 3,500-member church in the San Gabriel Valley, caught the attention of members of Pasadena Jewish Temple & Center last month, after a Boston-based media watchdog group sent out alerts that the conference’s sponsor promoted an anti-Israel agenda.

The conference is sponsored by the American arm of Sabeel, a Jerusalem-based organization that promotes itself as seeking a peaceful solution to the Israeli-Palestinian conflict. Critics say the group espouses anti-Israel sentiments, and they point to a similar conference it put on in Boston in October 2007 that sparked public protests from local Jewish groups, including the Jewish Community Relations Council.

That this battle should emerge here has surprised more than a few members of the community and many observers. Indeed, just a few years ago, Jewish groups and synagogues vocally supported All Saints after the IRS threatened to rescind the religious institution’s tax-exempt status because of an anti-war sermon delivered by its pastor.

But, it seems, even this close relationship could not vaccinate the two from the increasingly thorny terrain of engagement between mainline Protestant churches — which in recent years have debated selective divestment from Israel — and Jewish institutions. After the Presbyterian Church (USA) adopted an Israel divestment policy in July 2004, which was overturned two years later in the wake of fierce debate, the 2.2-million member Episcopal Church of America followed suit with its own divestment proposal. The church reversed course, but when the fraught subject of the Israeli-Palestinian conflict arises at the local level, tensions are liable to flare again.

“As a neighbor, I was disappointed,” said Rabbi Gil Kollin, rabbi emeritus of Pasadena Jewish Temple & Center. “A conference of this kind is going to make me feel uncomfortable and get a lot of our congregants upset.”

Kollin, 73, said that he first heard about the conference from the Committee for Accuracy in Middle East Reporting in America, which late last December sent out an e-mail letter to its more than 500 donors in the greater Los Angeles area, prodding them to submit letters of protest to their rabbis.

A handful of members of the 400-family Pasadena Jewish Temple & Center, a Conservative synagogue, contacted their rabbi, Joshua Levine Grater, expressing concern over the content of the Sabeel conference. At issue are Sabeel’s position on Israeli sovereignty and the Christian-inflected rhetoric of its founder, Anglican priest Naim Ateek, who has compared Israeli military actions in the West Bank to acts of “crucifixion.”

According to Dexter Van Zile, a Christian media analyst for Camera who has performed extensive research on Sabeel, Ateek’s writings contend that Jewish sovereignty in Israel is in direct contravention to the Jewish people’s vocation to suffer. “It’s an implicit way of saying the Jews are supposed to wander and suffer, and it’s an old trope used to deprive the Jewish people of their natural rights,” Van Zile said. “The question for the Jewish community in Southern California is whether they’re going to give a church that has been friendly to the Jewish community a pass for allowing people in who offer a ferociously one-sided anti-Israel narrative.”

The rector of All Saints, J. Edwin Bacon, who described his friendship with Ateek as “long and durable,” defended the Palestinian minister against Camera’s attacks. “To take one example and inflate it into the message of this man’s life is totally unfair,” he said. “I know him. He’s nonviolent, he’s not antisemitic and he does not get involved in Israel-bashing.”

Bacon also noted that he himself has traveled to Israel numerous times in the company of rabbis and Jewish leaders. In 2004, Bacon was also part of a coalition that helped beat back the movement in the Episcopal Church to adopt a policy of divestment from the Jewish state.

On February 11, Bacon met with some 100 members of the Pasadena Jewish Temple & Center to hear their concerns. He and Grater have developed a close friendship in the five years since Grater assumed his post, and both men described the flap over the Sabeel conference as one that ultimately would produce a positive outcome and increase dialogue between their respective communities.

“I’m not interested in vilifying this church, because they do too many good and positive things,” Grater said. “I believe in dialogue, and the power of repentance, and being in relationship.”

Bacon’s outreach efforts, however, were not enough to placate several key L.A. Jewish leaders. On February 12, the executive vice president of The Board of Rabbis of Southern California, Mark Diamond; the president of the Jewish Federation of Greater Los Angeles, John Fishel, and the director of the JCRC, Andrew Cushnir, sent a letter to Bacon expressing concerns about the Sabeel conference.

Another local Jewish leader framed the Pasadena incident as one in which a hawkish Jewish group swooped in with its own agenda, demonizing a progressive Christian church that has maintained a positive relationship with the Jewish community. “Many in our Jewish community, like Camera, used a sledgehammer,” said Daniel Sokatch, executive director of the California grass-roots social action group the Progressive Jewish Alliance. “We have to remember who our friends are, and not use a sledgehammer when a conversation would have done.”

Sokatch said that he has known Bacon and shared a close working relationship with him since they first met in 2000 at a social justice conference in Washington. Since then, he said, the two men have collaborated on several interfaith dialogue projects in L.A. On January 27, at Bacon’s request, Sokatch addressed several hundred members of All Saints in a forum intended to present a Jewish perspective on the issues stoked by the Sabeel controversy.

Part of the outcome of Sokatch’s presentation was the idea that All Saints, in conjunction with Jewish groups, could organize a conference that would include such liberal Jewish organizations as the New Israel Fund and the Israel Policy Forum.

Conflict Brews Over Palestinians Airing Views in the Pews of Pasadena