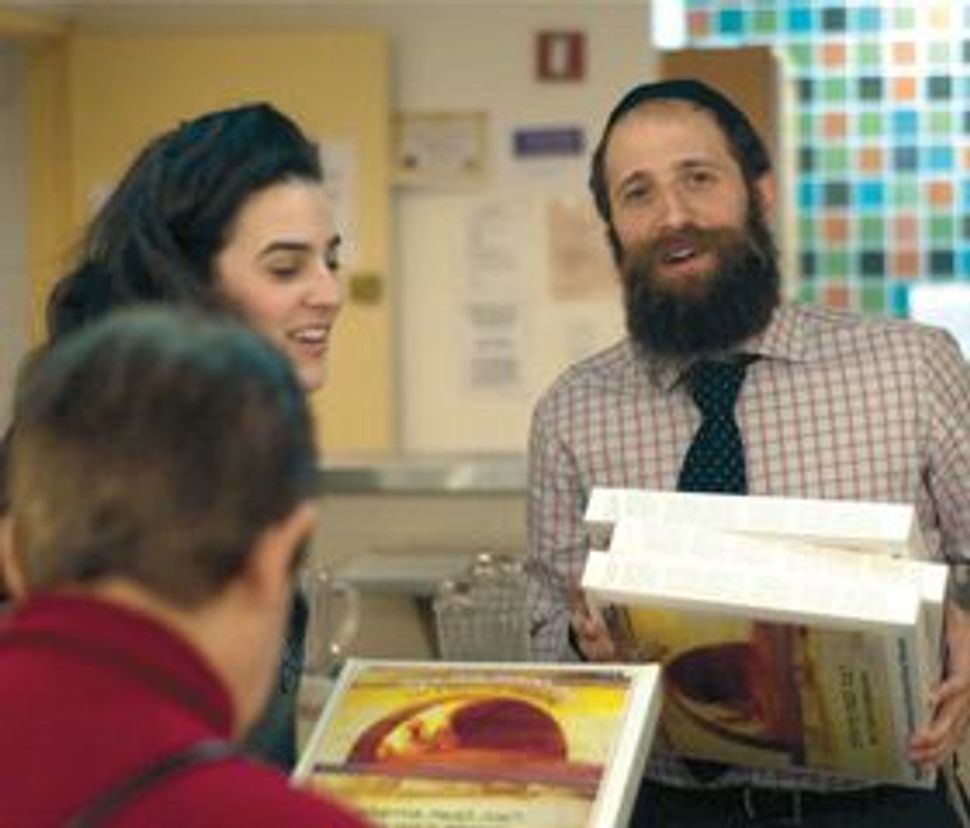 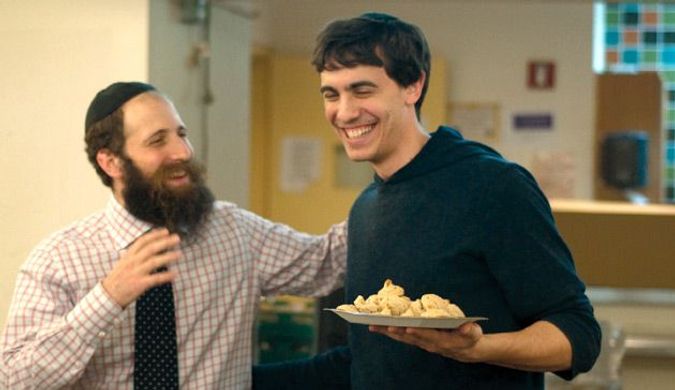 When Rabbi Dov Yonah Korn arrives for services at New York University on Friday nights, it’s like the captain of the football team has shown up at the homecoming party. As a student leads the evening prayers, Korn works the men’s side of the mechitza, doling out shakes, hugs and brotherly kisses. His sharp Borsalino fedora and untrimmed beard are exotic amid students’ small yarmulkes and neat dress shirts, but Korn himself couldn’t be more familiar. 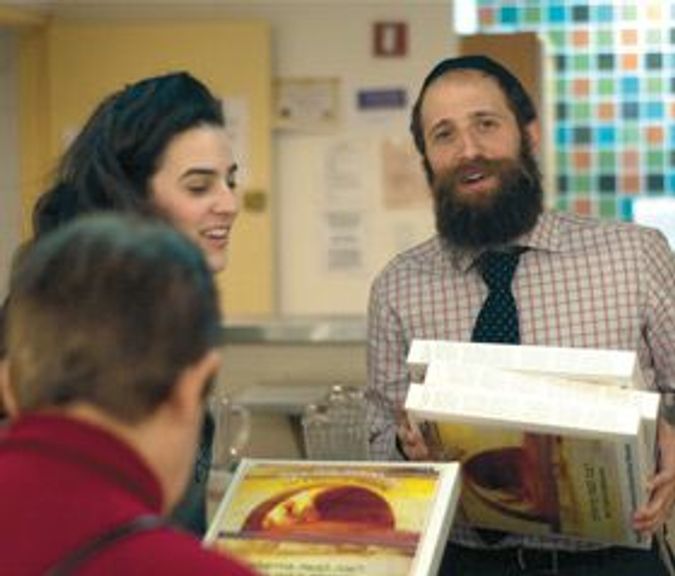 The services are held in the Bronfman Center, NYU’s $2.5 million Hillel building. But Korn is the campus’s Chabad shaliach, or emissary, and after the service, a steady stream of students follows him out of the five-story brownstone to a crowded basement on Washington Square North, where they eat a home-cooked meal, standing room only. On an average Sabbath, Korn says that he hosts some 250 people, many of whom will also attend Hillel’s own dinner.

“Coming into NYU, my perception of Chabad was the people on the street asking you to put tefillin on,” said Avi Buchman, a sophomore. Initially, he said, his parents were skeptical of his involvement with the group. “I explained to them that it’s not typical Chabad, trying to convert people, but it’s a home for all sorts of people on campus,” he said.

Korn’s Chabad House is part of a rapidly growing network created by the Lubavitch Hasidic movement on college campuses across North America. Fueled by significant startup grants provided by investor George Rohr, the number of dedicated Chabad centers on North American campuses, each run by a married couple from the Lubavitch community, has exploded to 119 from 32 in the past 10 years. Rabbi Menachem Schmidt, president of the Chabad on Campus International Foundation, which coordinates these activities, declined to estimate the amount of money that Rohr had donated.

Chabad is not the only growing player on the Jewish campus scene; more than 50 Hillel buildings have been built or rehabilitated around the world since 1995, and more than 200,000 young Jews, many in college, have participated in Taglit-Birthright Israel since the program was launched in 2000.

By lowering barriers to involvement in Jewish life, Chabad’s presence on campuses has the potential to have a major impact at schools where Hillel groups have previously been the sole providers of Jewish programming.

When Rebecca Zeldin arrived at Haverford College as a freshman in 2004, Jewish life at the small liberal arts school focused around a Hillel-affiliated Jewish Student Union staffed by a part-time rabbinical student from the Reconstructionist Rabbinical College. Zeldin, who attended Camp Ramah, the summer camp system affiliated with the Conservative movement, quickly took on a leadership role in the organization. The student leaders, she said, “saw me as an interested and enthusiastic young Jew, so of course they grabbed me and made me do all the things they didn’t want to do.” By her junior year, Zeldin was the group’s co-president.

That same year, Chabad set up a house in the neighborhood near Philadelphia shared by Haverford, Swarthmore and Bryn Mawr College, all small liberal arts schools. Staffing the house was Rabbi Eli Gurevitz, a Lubavitcher who, like some but not all campus shluchim, grew up in the Lubavitch community and never attended a liberal arts college.

Although the numbers of students that Gurevitz says he is reaching is relatively low — Sabbath dinners draw between eight and 30, Bagels and Torah lunches about 10 — Chabad on Campus considers his outpost a success. Schmidt, who serves as a shaliach at the University of Pennsylvania in addition to his role at the helm of the foundation, said that the organization is planning to build more like it on other small liberal arts campuses.

As an officer in the existing Jewish student group at Haverford, Zeldin was anxious about Gurevitz’s arrival. “I was initially defensive of my own organization, and was cautious of the idea of anybody else coming in and fracturing an already small Jewish community,” Zeldin said. “I was pretty vocal about it. And so Eli and Blumie [his wife] and I didn’t really start off on a good foot.”

By the end of the year, however, Zeldin was tired of her leadership role at the Jewish Student Union. She said that the group asked a lot of her and didn’t give back much. “I felt that I wasn’t being spiritually fed by the [Jewish Student Union],” she said.

So, she turned to Gurevitz and his new Tri-College Chabad. “What Chabad offered was the opportunity to really learn about Judaism, and to develop a relationship with it that didn’t require much from you,” Zeldin said. “You were able to get a lot out without having to put a lot in.”

For Schmidt, this dynamic is essential to the Chabad model. A Chabad House is like a home, Schmidt said: “You don’t ask somebody when they come in to sweep the floor. If you’re a polite guest, you’ll say, ‘How can I help?’” Schmidt emphasized that levels of participation by students differ from school to school.

Some in the Hillel system see this as a central distinction between the two approaches.

“In many ways, it’s even easier than Hillel,” said Samuel Heilman, a professor of sociology at CUNY’s Queens College and the co-author of an upcoming book on the Lubavitch, called “The Rebbe: The Life and Afterlife of Menachem Mendel Schneerson.” At Hillel, Heilman said, “they have expectations of you…. If you’re volunteering, they’re going to follow up with you. There are committees.” On the other hand, Heilman said, “Being a member of Chabad just means coming in there, feeling good.”

Chabad’s campus operation is planned through Schmidt’s small office of about 10 employees and his executive committee made up of Chabad rabbis. The organization, which is a subsidiary of the official educational arm of the Lubavitch movement, selects campus shluchim and provides them with Rohr-sponsored startup grants, along with some training and strategic planning support. But after three years, shluchim are expected to be financially self-sufficient.

“The rebbe’s organizational philosophy is very strongly that… as an organization, Chabad needs to take support from wherever it is,” Schmidt said. The “rebbe” refers to Schneerson, who presided over the Lubavitch movement from his headquarters in the Crown Heights section of Brooklyn, from 1950, shortly after the movement’s arrival in the United States, until his death in 1994. Schmidt explained: “People think there’s this big funnel of money coming from Crown Heights into Texas A&M…. That’s not the case.”

Annual budgets at campus houses are relatively small, beginning at $100,000 per house. Like Hillel executive directors, shluchim raise money from alumni, parents and other donors. “A big part of the day is fundraising,” Korn said.

Schneerson’s legacy plays a major role in the movement. Emissaries sometimes refer to themselves as “the rebbe’s shluchim” and credit Schneerson as the architect of the Lubavitch outreach approach, which asks Jews to fulfill specific commandments without demanding higher levels of general observance. Schmidt says that the rationale for this approach resides in the realm of Hasidic philosophy. “Every mitzvah that a person does makes a tremendous spiritual revolution in the world,” he said. “It’s not about becoming observant.”

A portrait of Schneerson hangs on the wall of NYU’s Chabad House, which, unlike many of the campuses houses, is not actually Korn’s home. Whatever draws the overflow crowds there each Friday night, it’s certainly not the décor. The room feels thrown together: a mishmash of chairs, a small ark, a plaque bearing donors’ names. Students stand shoulder to shoulder, eating food and socializing.

“He’s so easy to just hang out with,” said Rachel Channon, an NYU sophomore. “He’s a really cool guy.”

“It’s weird to say that you’re friends with the rabbi, but that’s what it became,” Buchman said.

Korn was born into a Reform family and spent years as a sort of spiritual seeker and Grateful Dead acolyte before joining Chabad. Elements of the story of his personal journey are well known by students and clearly trotted out often by Korn.

“They went to concerts, and they went through college. Everything that we’re doing now, they went through,” Channon said of Korn and his wife, Sarah, who also became religious as an adult. “It’s not like they grew up in small, secluded religious areas. They’re incredibly understanding and nonjudgmental.”

Korn is personal friends with Yehuda Sarna, the Hillel rabbi at NYU, which may contribute to the peace between the organizations. “Our kids have playdates all the time together,” Sarna wrote in an e-mail. “[We] both lead family lives of mesirut nefesh (sacrifice) for the community, and that creates a unique bond.”

But relationships between local Chabad and Hillel chapters are not always so smooth. At Princeton University, staff at the Center for Jewish Life, the campus’s Hillel group, lobbied in 2007 against an effort to have Eitan Webb, the school’s Chabad rabbi, named as an official campus chaplain.

“It’s important for there to be a pluralistic umbrella organization like Hillel… as the primary liaison to Jewish life at the university,” said Rabbi Julie Roth, executive director of the Center for Jewish Life. Roth was a university chaplain at the time.

Webb was eventually made a chaplain, in 2008. Today, Roth says that the groups cooperate on some programming. For her, Chabad’s presence presents a challenge to Hillel. “I think Chabad encourages Hillel to do what we do best even better, which is to allow students to define Judaism in multiple ways, to be their own journey, with no particular destination as the right destination,” she said.

At NYU, Hillel co-president, junior Jordanna Birnbaum, said that her organization has tried to match Chabad’s outreach by handing out challah to students on campus on Fridays to encouraging them to attend Sabbath dinner at the Hillel.

“Chabad has made us think about how we can be even more welcoming,” Birnbaum said.

On a national level, professional leaders of Chabad and Hillel profess to have good relations. Wayne Firestone, president of Hillel International, says that he understands Chabad’s appeal. “I’ve talked to students that like the ruach, [the] spirit that they bring to events — the dancing, dancing on tables at times,” he said. “I think those things maybe 10 years ago would have been shunned, or viewed as a little bit odd, but I’ve found the millennial generation is not only tolerant, but also interested in things that are unique and particular.”

But Firestone draws a distinction between his organization and Chabad in terms their respective relationships with host universities. “What Chabad’s very good at is the idea of reaching out to people, not expecting them to come to you. On the other hand, we do this in close concert with university norms,” he said. “We live as part of the campus, and the campus looks to us: We’re formally part of the campus; we’re citizens of the campus. That’s usually not the case with Chabad.”

And while Hillel can point to an 80-year history and generations of alumni, Heilman thinks that the impact of Chabad’s growth on campuses is easily overstated. After all, he said, the number of students who become observant because of their encounters with Chabad is probably quite small.

Chabad’s leaders say that making students observant is not their core goal, and that their movement is just getting started.

“Ten years in the American Jewish community is not a long time,” Schmidt said. “We’re not in a hurry. We’re here long term.”